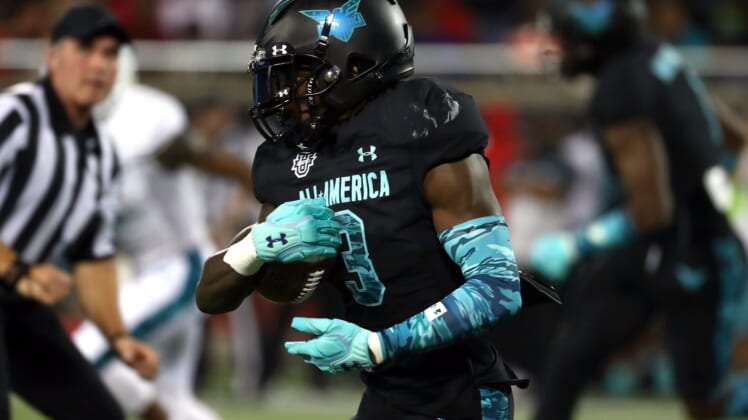 The wild recruiting saga for 2020 five-star running back Zachary Evans is finally over. After months of speculation and drama, Evans has reportedly enrolled at TCU and will play for the Horned Frogs in 2020.

According to 247Sports, Evans signed a financial aid agreement with TCU on Sunday and attended his first online class on Monday morning. It ends a wild recruiting cycle that saw Evans put many of the SEC’s top programs on a roller coaster ride before he ultimately spurned them for TCU.

Evans, a star running back out of Fort Worth, Texas, was suspended multiple games in August 2019 for violating the team’s rules. He returned later in the season, but was suspended before the 6A Division 1 State Championship for another undisclosed incident.

He earned MVP honors at the Under Armour All-American Game and revealed on Jan. 2 that he signed a national letter of intent with the University of Georgia. However, Evans never enrolled and the Bulldogs later released him from his letter of intent.

Evans would go on to visit Ole Miss and Tennessee following the release. Before the COVID-19 pandemic, he was believed to be considering Georgia, Texas A&M, Tennessee, Ole Miss and LSU. However, he ultimately decided to stay home and become TCU’s first five-star recruit in the modern era.

He rushed for 4,867 yards with 76 touchdowns and is already being considered a future NFL talent with the ability to become an outstanding all-purpose back. Now joining the Horned Frogs, Evans will have the opportunity to put his recruiting drama behind him and potentially carry TCU’s offense for years to come.