Johnny Manziel hasn't played in the NFL since 2015. What if he returned? Where would he fit best? Questions you didn't know you needed answers to. Until now. 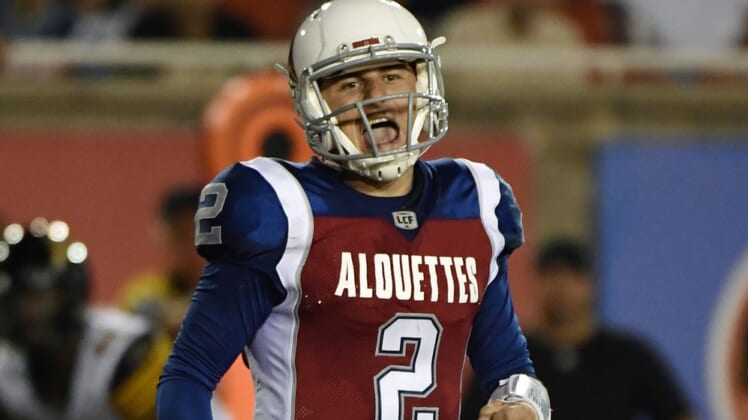 I KNOW! I know. It’s horrible. Johnny Manziel is probably never going to return to the NFL, and it’s a stretch to imagine one team, much less five, even considering taking a chance on him at this juncture.

But in the spirit of Marvel’s captivating trailer for What If…? — along with the news that Manziel is planning a gridiron comeback in a new league — yours truly is ready to roll up the sleeves and do the ugly duties of finding an NFL future for the 28-year-old former Heisman Trophy winner, somewhere in the multiverse.

Which organizations are built to withstand the madness that comes with acquiring Johnny Football, who last played for the Alliance of American Football in 2019 and in the CFL the year before? Are there any remaining ties to the highest level of pro football that Manziel can capitalize on?

While it’s a long shot he ever sees the field again, let’s see where Manziel would be a great fit if he were to play in the NFL for the first time since 2015 with the Cleveland Browns.

Other than the obvious comedic potential this presents given the history of “Billy Manziel” and his trip to Vegas, there are some loose ties that present a pathway to the Raiders for Johnny Manziel.

Prior to his glorious return to the Silver and Black, Raiders coach Jon Gruden was a magnetic TV personality at ESPN who hosted a show titled Gruden’s QB Camp. Unless you’re an NFL fan who was living under a rock at the time, you had to have seen Gruden hamming it up with the top quarterback prospects as each draft class came and went. He even sat down with Manziel for some film study, grilled him for his off-field issues and put him through intense drills to see if he had the chops to thrive as a pro.

The Texas A&M star left such an impression on Gruden that he said, on TV during 2014 draft coverage, that he’d take Manziel No. 1 overall. WHAT?

Oh, but there’s more. Who, you ask, was Las Vegas general manager Mike Mayock’s top-rated QB prospect that year? One Johnathan Paul Manziel. Because Mayock was working for NFL Network at the time, this, too, is public record — and he even compared Manziel to STEVE YOUNG.

Whether Gruden and Mayock would even consider Manziel these days is unclear. To play a delicious devil’s advocate: these are the same men who acquired DeShone Kizer (0-15 starting record) last year and continue to employ Nathan Peterman, he who threw five interceptions in the first half of his starting debut in 2017.

Doesn’t sound like such a crazy gamble now, does it?

A QB controversy in Kansas City there is not. Patrick Mahomes is that dude. He’s probably on his way to a second league MVP award in his third year as a starter, to go with a Lombardi Trophy and Super Bowl MVP award from last season. What the Chiefs do lack right now is any decent backup behind Mahomes in the catastrophic event he were to get injured, or miss any games at all. Chad Henne is it.

Head coach Andy Reid is one of the most brilliant offensive minds in NFL history. He’s managed to build an incredible supporting cast around Mahomes, and he’s the ideal distributor to get the ball to his playmakers with those multitudinous, insane arm angles, preternatural talent and off-the-charts football IQ that only continues to improve.

Manziel has a different playing style to Mahomes, and doesn’t possess the arm strength, consistency or fundamental base that the NFL’s best quarterback boasts. That said, Manziel was known for throwing off-platform and from multiple different arm angles. Like Mahomes, he has a baseball background and was even drafted by the San Diego Padres.

Playing in the Chiefs’ offense is any quarterback’s dream, and probably a privilege that’ll be reserved for Mahomes exclusively on Sundays for the next decade-plus, and for backups more deserving of a chance to play on an NFL roster than Manziel. With those caveats all expressed, the possibility of JFF spelling Mahomes even in mop-up garbage time at the end of a game is morbidly intriguing to a sizable fan demographic. If Manziel is on good behavior with the Chiefs, he can rebuild his image around the league and perhaps parlay that opportunity into greater playing time elsewhere.

Johnny Manziel to the Seattle Seahawks

Few coaches with such a loose, player-friendly style yet an extremely competitive locker room and culture have succeeded to the degree Pete Carroll has. It may be unprecedented. Never afraid to roll the dice on players with past issues, Carroll and the Seahawks will soon welcome back Manziel’s former Browns teammate Josh Gordon following the gifted receiver’s recent reinstatement.

Similar to the situation in Kansas City, Seattle isn’t going to have any doubt who’s starting at quarterback for the foreseeable future thanks to the presence of Russell Wilson. The dual-threat signal-caller has almost single-handedly reversed the franchise’s fortunes, delivering two Super Bowl trips, a championship and first-ballot Hall of Fame greatness since arriving as a third-round pick in 2012.

Wilson has been an absolute iron man, never missing a single start as a pro. It’d really take a serious injury to get him off the field. If he were to go down, though, the Seahawks don’t have anyone behind him remotely capable of keeping the offense afloat. Geno Smith is the only man available to step in.

Until Seattle continually succeeds in building a good pass-protecting offensive line around Wilson to prevent him from running for his life, creating magic on busted plays and scrambling for yards on the ground, the high risk will persist. That’s even with Wilson’s sixth sense he seems to possess to escape big hits, and dodge defenders in the pocket.

Manziel has that similar, uncanny instinct to escape and improvise. While not as gifted as a thrower or runner, Manziel does display a similar style of play to the point where Wilson could be the ultimate mentor for him on and off the field to revive his on-life-support NFL career.

Johnny Manziel to the Pittsburgh Steelers

Now we’re going to delve into the first of two succession plans Manziel could figure into, beginning with Pittsburgh as the heir apparent to Ben Roethlisberger.

Big Ben still has some time left, but he’s obviously nearing the end of his playing days. As 2019 proved, the Steelers have no viable option behind Roethlisberger at this time. Mason Rudolph and Devlin “Duck” Hodges were pretty awful. It might’ve been Mike Tomlin’s best coaching job ever to go 8-8 and keep his perfect streak going of avoiding a losing season during his tenure.

By keeping Roethlisberger all these years, Pittsburgh has been clear about the fact that they don’t shy away from quarterbacks with checkered off-field pasts. That’s putting it delicately so as not to stray too far from the topic at hand. The Steelers also tolerated lots of nonsense from Antonio Brown.

Through any turmoil Pittsburgh has encountered during the Tomlin era, the team seems immune to it all in terms of consistent on-field performance. Now in the midst of an excellent 2020 season, Roethlisberger is distributing all around the yard to a talented cast of young receivers.

Unless they make a concerted effort to find Big Ben’s eventual replacement soon through the draft or free agency, the timing could be right for Manziel to at least get a look from the Steelers as a low-risk, high-reward option to perhaps begin on the practice squad with designs on ascending to second string.

Tampa Bay is no stranger to taking on complete knucklehead quarterbacks. Look no further than its decision to draft Jameis Winston, who to be fair, at least didn’t burn himself out of the NFL following his roller-coaster Buccaneers tenure. That ended in 2019 after he threw 30 interceptions and an NFL single-season record seven pick-sixes.

Now, the Buccaneers have the GOAT of the position as Winston’s successor, Tom Brady. What better man to learn the finer points of quarterbacking from than TB12?

Brady would not be having any of the nonsense Manziel brought to the Browns. He’d learn to prepare like he never has before, and potentially position himself to take over once the 43-year-old legend decides to finally hang up his cleats.

In the meantime, while he rides the bench for a year or two, Manziel is a cost-effective backup option for Tampa Bay. No one will seriously be pining for Brady’s benching even if he’s declining with such a rusty option waiting behind him on the depth chart. Now, that’s if everything were to align perfectly for Manziel.

Another potential hang-up is the fact that the Bucs have Josh Rosen on their practice squad this year. Rosen could very well fill Brady’s shoes someday, and if the former first-round pick is at all living up to that billing, Tampa will be more inclined to stick with Rosen rather than taking a flier on Manziel in 2021.