Five moves the Blazers must make to overtake the Warriors 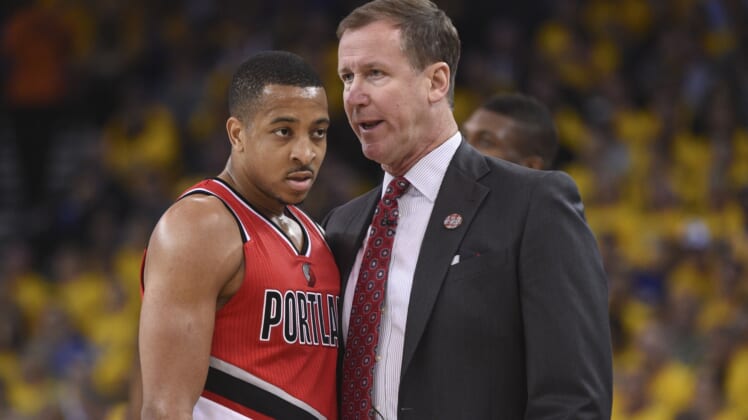 It became readily apparent during their four-game series sweep at the hands of the Golden State Warriors that the Portland Trail Blazers are not close to their Western Conference rivals.

Sure three of the games were relatively competitive. But when all was said and done, Golden State’s star power took over in the Western Conference Finals.

Now heading into an important offseason, we’re going to check in on five moves general manager Neil Olshey and Co. must make to overtake Golden State next season.

Olshey has struggled big time when it comes to finding role players on the cheap. Next season alone, the combination of Evan Turner and Mo Harkless are set to count almost $30 million against the cap. That’s in no way sustainable out west. It’s in this that Portland must sell off one of these contracts in order to build a better secondary unit. That could include offering up its first-round pick (25th overall) as bait for a team with cap room.

As absurd as it might seem, breaking up Portland’s star-studded backcourt isn’t a bad idea. McCollum and Damian Lillard might both be top players at their positions. But they don’t compare all too well to the Splash Brothers. It’s in this that trading McCollum, who is right in thick of his prime, could add another layer to the Blazers’ roster. Moving him for a star small forward and other pieces would change the dynamic of this team moving forward. It’s an extreme hypothetical, but imagine Kyle Kuzma and Brandon Ingram in lieu of McCollum.

Here’s yet another unpopular opinion. Stotts has been outcoached by Steve Kerr in all three of the playoff matchups between Portland and Golden State. That’s not going to change moving forward. While Stotts has led this team to the most success it has seen since the Clyde Drexler era, he might not be the one to take Portland to the next level. It’s somewhat similar to when Golden State fired Mark Jackson and replaced him with Steve Kerr. The decision wasn’t popular. But it ended up working out.

Use mid-level exception on Nikola Mirotic

Assuming for a second McCollum is traded for a wing (as mentioned above), the Blazers would still need to find a power forward. It’s in this that the team uses its mid-level exception on a stretch forward in Mirotic who would put pressure on the Warriors. He’s proven to be a solid matchup against Draymond Green in the past. He’d also be a dramatic upgrade over Meyers Leonard from an overall perspective.

Leonard’s performance in Game 4 of the Western Conference Finals is well known. Dude dropped 25 points in the first half alone. That was his highest-scoring game in either college or the NBA. It’s now time for the Blazers to capitalize on this success with recency bias. Leonard is not the player we saw in Game 4. He’s proven that throughout his career. It was a mirage. Find someone dumb enough to believe he can be a core player and move him for more assets.