Five MLB teams that could disappoint in 2020 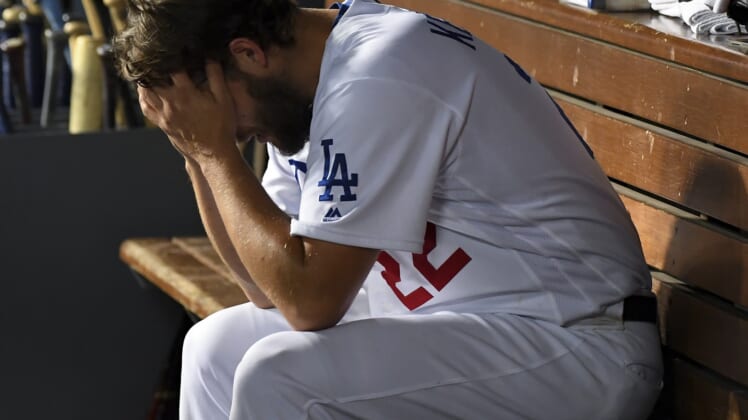 Many MLB teams have been busy this winter, turning over their rosters and making the moves necessary to take significant strides in the 2020 season. While some have stepped up this winter, others have fallen short.

Whether due to front offices missing out on top free agents or ownership tightening its wallet and looking to trim payroll, several prominent teams have failed to improve their teams this offseason. In fact, several contenders from this past year are set to enter with worse rosters next season.

The roster turnover across the league is great news for the game. It clears the way for several teams to take a step forward and surprise everyone in 2020. Of course, for the teams that didn’t make additions, the upcoming season could end with fans being let down by their favorite club.

This was supposed to be the year the Dodgers would finally land the big name in free agency. After years of getting under the luxury tax, Los Angeles would use the money to land a star pitcher or All-Star hitter. Instead, the front office missed on each of their top targets and lost Hyun-Jin Ryu.

As of now, the Dodgers will head into spring with Julio Urías as the No. 3 starter. While he certainly possesses the talent, he also hasn’t thrown 100-plus innings in a season since 2016, before he underwent multiple surgeries on his arm. The back of the rotation is unspectacular, while the Dodgers’ lineup needs Cody Bellinger to be much closer to his first-half numbers (.336/.432/.692) than his line after the All-Star Break (.263/.371/.546) and an outfield depending on Joc Pederson, Alex Verdugo and A.J. Pollock.

There is still a chance for Los Angeles to salvage this offseason. Pulling off a trade for Mookie Betts or Francisco Lindor and Mike Clevinger. Right now, though, the rotation carries far greater downside and depth than the 2019 season and the lineup is good but not great. Arizona and San Diego made improvements this offseason – the same can’t be said in Los Angeles.

Minnesota defied expectations in 2019 and emerged as one of the best teams in baseball. Historic power production from their lineup, paired with strong starts by the pitching staff, allowed the Twins to cruise to the AL Central crown. It won’t be like that in 2020.

The Twins ranked 15th in ERA (4.44) after the All-Star Break. Josê Berrīos went from All-Star ace in the first half to an inconsistent hurler who struggled with his command. After watching the rotation unravel in October, Minnesota made fringe back-end starter Homer Bailey and injury-plagued southpaw Rich Hill its big additions, paired with the return of Jake Odorizzi and Michael Pineda. The front office didn’t add a front-line starter or strengthen the bullpen. Instead, it chose to save money and avoid any long-term commitments.

Minnesota will face much greater from the Chicago White Sox this season than it saw from any division foe in 2019. It will also be relying on Nelson Cruz to repeat a career-best performance following his age-39 season. At the same time, shortstop Jorge Polanco and catcher Mitch Garver each build upon their breakout seasons. After winning 101 games in 2019, Minnesota might finish with 86 this coming season.

The Brewers have been a pleasant surprise in recent years. Between finding undervalued players in free agency and hitting on big trades, the moves have paid off with three consecutive seasons of 86-plus wins and two straight playoff appearances. Unfortunately for Milwaukee, that streak could end in the upcoming season.

Losing Mike Moustakas created a significant void in Milwaukee’s lineup. While Luis Urías is an excellent long-term addition, he’ll go through growing pains in his first full season. Meanwhile, 33-year-old Lorenzo Cain showed signs of his age in 2019 and his .697 OPS is a significant cause for concern near the top of the lineup. Relying on Justin Smoak and Eric Sogard as everyday players further brings makes this lineup less likely to carry its rotation.

Keep in mind, Milwaukee will also be asking a lot of Brandon Woodruff and Adrian Houser to serve as its front-line starters with even greater questions behind them. If Brett Anderson doesn’t stay healthy or Josh Lindblom’s success overseas doesn’t translate to the majors, it creates more uncertainty for this rotation. Milwaukee’s run differential (+3) in 2019 came with an expected 81-81 record and they finished 89-73. We don’t see them getting as lucky in 2020.

MLB’s sign-stealing investigation into the Astros, which could carry significant penalties for the club, has overshadowed a quiet offseason by the organization. Not only have the Astros lost impact players from this past season, but they also haven’t addressed glaring needs.

Even before losing Gerrit Cole, Houston’s rotation had concerns. While Justin Verlander and Zack Greinke are a great duo, No. 3 starter Lance McCullers Jr. will be on an innings cap in his first season back from TJS. The Astros will also need José Urquidy to maintain his rookie numbers and eat innings as their No. 4 starter. As for the fifth starter, that’s an even greater question mark.

Houston’s lineup should still drive in plenty of runs and is loaded with All-Star talent. However, the questions at the back of its rotation and in the bullpen mean a team that won 107 games last season might be battling for 95 wins this year.

Whereas you’d expect a team to keep multiple, young All-Star hitters, Chicago is taking a different approach. Whether the Cubs trade Willson Contreras or deal Kris Bryant, perhaps even both, this team will take a step back in 2020.

Chicago entered the offseason needing to find solutions at second base, center field and in the back of its rotation. Not only have none of these weaknesses been addressed, but the Cubs are seemingly also looking to downgrade at third base and catcher. This, of course, from a team that finished 84-78 last season and didn’t make the playoffs.

Perhaps David Ross will be an excellent manager and the new voice in the clubhouse will provide a spark. Given the weaknesses in the lineup and rotation, though, it’s hard to see a first-year skipper making up for an increasingly worse team. The Cubs are no longer the best team in Chicago. If baseball fans in the city are looking for a fun team to cheer for, root for the White Sox in 2020 and beyond.