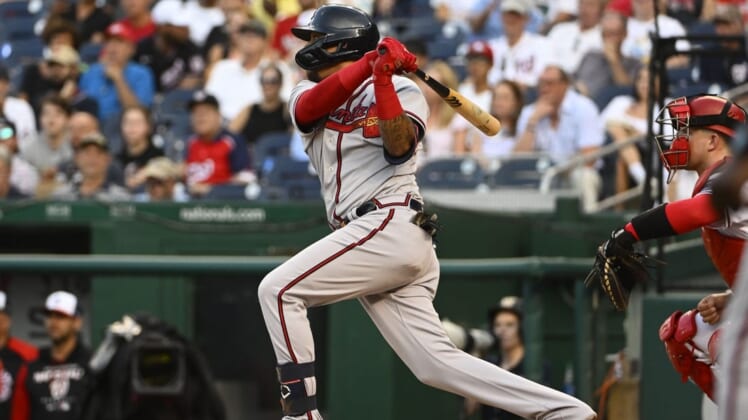 Travis d’Arnaud hit a three-run blast and four of his teammates added homers as the Atlanta Braves notched a 10-4 victory over the host Washington Nationals on Tuesday night for their 13th consecutive win.

Harris and d’Arnaud each had three of Atlanta’s 13 hits. The Braves hit back-to-back homers twice in the contest.

Braves left-hander Max Fried (7-2) allowed four runs and six hits over 5 2/3 innings while picking up his seventh win in his last eight starts. Fried struck out the first five batters he faced and finished with six overall to go with one walk.

Ehire Adrianza had two hits for the Nationals, who have dropped six of their past eight games.

The Braves wasted no time jumping on Washington right-hander Jackson Tetreault (0-1), who served up three homers in his major league debut.

Swanson, the second hitter of the game, got the power show started by homering to left field for his ninth blast of the season.

Arcia’s sacrifice fly made it 2-0 in the second before Atlanta erupted for five runs in the third.

D’Arnaud hit a three-run shot to make it 5-0 and Ozuna followed with a 432-foot blast to left, his 12th of the year. Harris had an RBI double later in the inning to make it 7-0.

The Nationals scored three runs in the bottom of the frame on a groundout by Lane Thomas, a wild pitch by Fried and a sacrifice fly by Cesar Hernandez.

Arcia and Harris slugged back-to-back blasts in the sixth off right-hander Andres Machado to make it 9-3. It was the second homer of the campaign for both players.

Washington registered three singles in the sixth with the last one off the bat of Luis Garcia, who drove in another run to end Fried’s night.

d’Arnaud scored for the third time in the ninth when Nationals left-hander Francisco Perez uncorked a wild pitch.

Tetreault allowed seven runs and nine hits in four innings. He struck out two and walked one.