There are some humongous games on the college football schedule in Week 12 which will lead to playoff implications galore. Within these big games are some interesting dynamics at work that should lead to entertaining results for fans across the nation.

In honor of the hugeness of these pivotal games, we present a platter of bold predictions.

Wake Forest will hold Deshaun Watson to under 150 yards passing

Did you know the Demon Deacons feature one of the nation’s top pass defenses? Most people likely aren’t aware of this fact, simply because Wake Forest has only won three games this year. Last weekend was a perfect example of what this team can do, however, as Notre Dame’s DeShone Kizer was held to just 111 passing yards and struggled to find anyone open deep down the field.

Clemson’s sensational sophomore quarterback Watson has been unstoppable lately, making huge plays with his arm and his legs. He’s been hot passing the ball the past three games, averaging 349 yards and almost three touchdowns per game. That hot streak is about to get tamped down this upcoming weekend, however. Expect Watson to struggle in similar fashion to Kizer, and for the third time this year be held to less than 150 yards passing.

Clemson is still going to win — big — but Watson is going to need to make plays with his legs. Furthermore, look out for the defense to have a huge day against the impotent offense of Wake Forest. The Tigers will easily improve to 11-0 at home in front of the rabid fans at Death Valley. 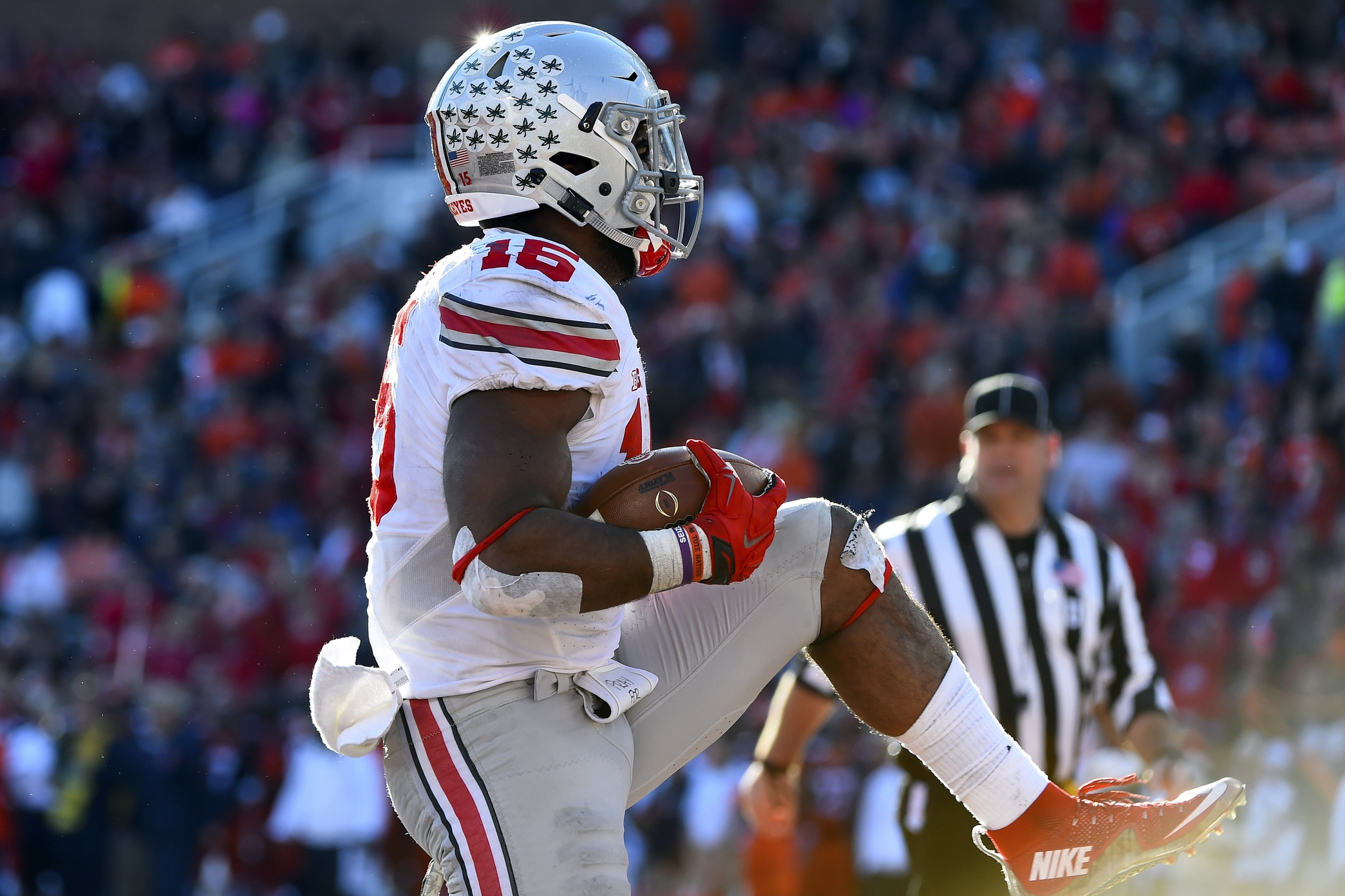 Ohio State’s offense revolves around Elliott, especially now that quarterback J.T. Barrett is the man behind center. Barrett isn’t a pure pocket passer, and head coach Urban Meyer is more committed to running the ball now that he’s made the switch from Cardale Jones.

Elliott has the nation’s longest 100-plus yards rushing streak going, hitting that mark in 15 straight games. He’ll keep the streak alive Saturday night at Memorial Stadium against Michigan State’s defense, which is normally adept as shutting down opposing running backs.

We’ve already called an upset in Columbus this weekend, with a predicted score of 31-27 for the Spartans over the Buckeyes. That said, Elliott is going to do everything in his power to keep his team in the game against underrated Michigan State, which still could make its way into the playoff by winning out.

Look for the running back to come close to 200 yards before the game is done, and he’ll punch the ball in once or twice along the way. Unfortunately for Elliott and the Buckeyes, Connor Cook and the Spartans will head home with big smiles on their faces after beating Ohio State in Columbus.

After running a gauntlet of epic proportions the past six games against top SEC competition, Alabama gets a week off to breathe before the final push towards a championship begins. This weekend the Crimson Tide face the Charleston Southern Buccaneers, which have compiled a record of 9-1 in the Big South conference. The record is impressive, but the Bucs don’t stand a chance against the top team in the SEC.

in those contests. Look out for a tremendous first-half performance from Heisman favorite Henry, who may not play after halftime in the final home game for the Crimson Tide this year.

Alabama’s behemoth offensive line has been paving some massive running lanes this year against the top competition in the nation, and Henry should find some opens space to run in this upcoming game. 150 yards before halftime may not be the boldest prediction on this list, but it’s still quite the tall order to fill, no matter which team he’s facing.

There is a chance freshman phenom Jarrett Stidham will have to sit this one out with a back injury, which he suffered last weekend against Oklahoma. Should he be forced to ride the pine, then it will fall to backup quarterback Chris Johnson to keep Baylor’s playoff hopes alive against undefeated Oklahoma State this Saturday night in Stillwater, Ok.

Regardless of which quarterback is playing, expect receiver Corey Coleman to atone for his poor outing last Saturday with a monstrous performance this weekend against the Cowboys. In fact, it might do well for him to have the more mobile Johnson playing this one, anyways, because whichever quarterback is playing will be under pressure much of the night against Oklahoma State’s outstanding pass-rushing front seven.

Coleman was held to just 51 yards on three catches against Oklahoma, and he failed to score a single touchdown for the first game all year long. With 20 through nine games, the junior receiver is still within reach of the NCAA’s all-time single-season touchdown reception record, which is 27.

The inspiring story behind the man who has #20FreakingTDs. @CollegeGameDay features Corey Coleman and his journey. https://t.co/OkQKDzxb3A

Unfortunately, even with a huge game by Coleman, Baylor will fall just short of victory on the road. The Cowboys have a way of making big plays when they need them the most and will overcome his outstanding performance with a hard-fought win at home.

Even if TCU quarterback Trevone Boykin does play Saturday, the Horned Frogs are likely going to experience a humbling loss at the hands of Mayfield and the Sooners, who are on a terrific roll with five wins in a row. TCU receiver Josh Doctson is out until the postseason, and injury-riddled Horned Frogs have finally reached a tipping point with all their banged-up stars.

Never featuring a top defense, TCU has won by putting up points in bunches. Without a full compliment of offensive firepower, this team is due for a blowout loss on the road against Oklahoma this Saturday.

On the other side, look for Mayfield to have one of his best games of the season against TCU’s middling defense. Though he’s only done it once before this year, Mayfield should exceed 400 total yards and score four or more total touchdowns. He’s been emerging as a dark horse Heisman candidate this year — with 3,383 total yards and 37 touchdowns — and will continue rising as the season comes to its end.

As Oklahoma continues winning, it will be fascinating to see if this team actually makes it into the playoff after being bullied by Texas earlier this year in the Red River Rivalry game.