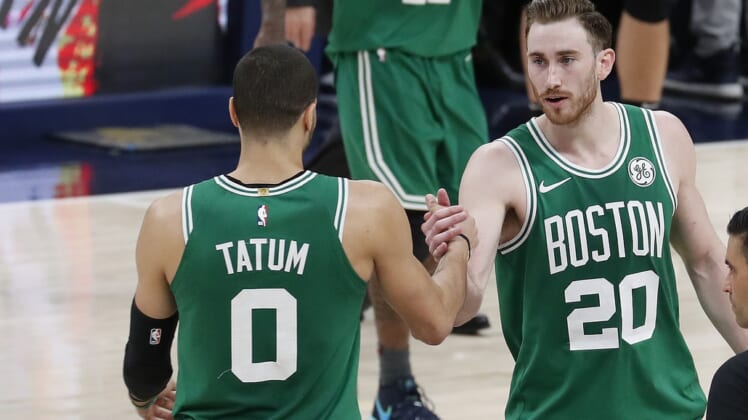 Once the NBA Finals wraps up between the Toronto Raptors and Golden State Warriors, we’ll have just a short period of time before the NBA Draft. At that point, the Association’s offseason will be in full effect.

It’s going to be one of the craziest summers we’ve seen around the basketball world in some time. And while most of it has to do with free agency, a number of big-name players could be on the trade block.

From Anthony Davis in the Bayou to Bradley Beal and Chris Paul, we’re expecting a ton of blockbuster trades. Here’s a look at five that make the most sense.

Houston is reportedly looking to deal away some star talent. That includes both Chris Paul and Clint Capela. Though, Paul is going to be a tough sell. The 34-year-old point guard has regressed some in recent seasons and is owed an absurd $123-plus million over the next three years. Houston is not going to get top-end talent for the future Hall of Famer.

This trade includes the Rockets acquiring three secondary pieces to help build depth on their roster. Hardaway Jr. averaged north of 18 points this past season and would be a nice depth addition. Meanwhile, Brunson could start in a pinch if the Rockets don’t acquire a starter-caliber point guard. For the Mavericks, this move is obvious. Get a vet point guard to team up with Kristaps Porzingis and Luka Doncic.

Will Washington look to blow this whole thing up after struggling to maintain relevance with two All-Stars on its roster? Given the injury to John Wall, that seems likely. It really is dependent on who the team brings in to run its front office.

This trade enables the Wizards to get younger with a potential generational talent in Michael Porter Jr. It also gives them a starting shooting guard to replace Beal and a defense-first wing in Craig. From a Nuggets perspective, the idea of teaming Beal up with Nikola Jokic and Jamal Murray has to be seen as ideal.

Prepared to select Murray State guard Ja Morant at No. 2 overall later this month, it’s pretty clear that the Grizzlies are looking to deal their longtime point guard. At issue here is Conley’s contract. He’s owed north of $67 million over the next two seasons. Not many teams can take on that salary despite Conley coming off a career-best performance.

Detroit is one of those squads. It also has a huge need at point guard with Reggie Jackson performing nothing like a starter at that position. The idea of adding Conley to the mix would create a nice inside-out tandem with Blake Griffin. Meanwhile, Memphis adds a potentially dominant big to team up with Morant and stud youngster Jaren Jackson Jr.

We previously noted that Portland might need to take some drastic measures in order to be seen as legit contenders in the Western Conference. The team’s sweep at the hands of the Golden State Warriors in the conference finals magnified this further.

This hypothetical trade would give Portland a player in Kevin Love that the team has been seeking for some time now. He’d team up well with Damian Lillard. Meanwhile, the Blazers get younger with a valuable top-five pick. For the Cavaliers, they add an All-Star caliber shooting guard to team up with stud youngster Collin Sexton.

From a Celtics perspective, the idea of adding Davis to the mix has been in the cards for some time. However, picking up Holiday to replace a potential free-agent departure in Kyrie Irving would only add another layer to this. Boston is also able to get out from under Gordon Hayward’s contract as a sweetener. It will then team Davis and Holiday up with Jaylen Brown to form a potentially dominant trio.