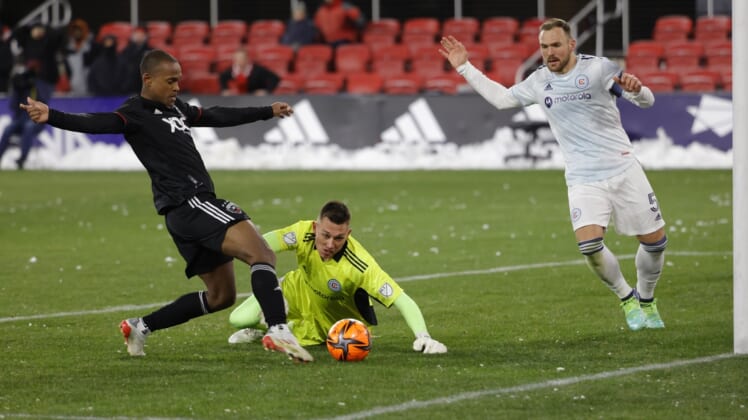 Stanislav Ivanov and Jonathan Bornstein scored as the Chicago Fire posted their first victory of the season and remain undefeated with a 2-0 victory over host D.C. United on Saturday night in Washington.

Ivanov scored in the 32nd minute and Bornstein in the 80th minute to hand United (2-1-0, 6 points) their first defeat of the season. The Fire also become the first club to score against D.C in 2022.

Chicago had just four road wins from 2019-’21. United, meanwhile, were trying to open with three consecutive wins for the first time since 1999.

D.C. United posted the first quality chance of the night through Ola Kamara, whose 14th-minute header was saved, point-blank, by Chicago keeper Gabriel Slonina (four saves). But it was the Fire who opened the scoring with their first goal of the campaign.

United let the ball get past their defense, and it was a streaking Ivanov who benefited enough to foot it past veteran United keeper Bill Hamid (five saves) just beyond the half-hour mark to stun the home side.

D.C. United held 54 percent of the possession and recorded nine total shots in the first half.

A scary moment came in the 48th minute when Slonina collided with a pair of United players and seemed to hurt his ankle. However, he stayed in the game.

Though the Fire were protecting that one-goal advantage in the second half, choosing not to pressure too much, they managed to ice the match through the veteran defender. Off a perfectly placed header from Gaston Ramirez, Bornstein drove the ball past Hamid heading into the final 10 minutes of the contest.

United outshot the Fire 15-13, but the visitors held a 8-5 advantage when it came to shots on target for the full contest.