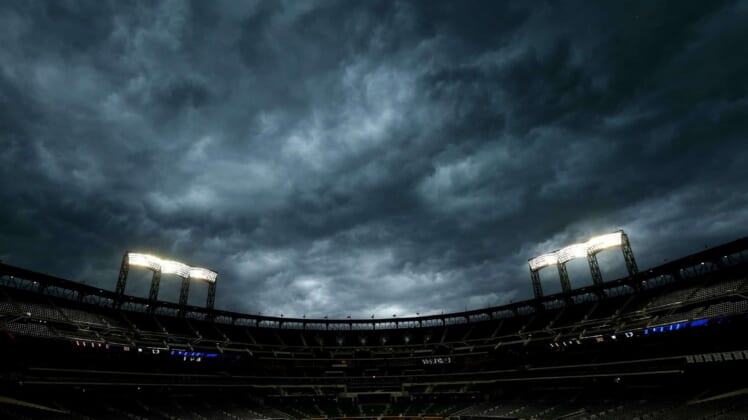 It’s no secret that the New York Mets have become an epic dumpster fire this season. After opening the season 11-1, they’ve encountered nothing but bad luck since then and find themselves at 26-26.

Injuries have been a huge problem, and the team just cannot seem to catch a break. Seemingly piling on to all that, an event at Citi Field seemed to perfectly encapsulate the team’s season on Wednesday.

Out of nowhere, a fire broke out at the stadium, which was big enough that FDNY had to be called out.

More bad news for the struggling Mets. The FDNY was forced to put out a fire that broke out at Citi Field. (Video courtesy Instagram user raul.jimenezii) pic.twitter.com/2F2lqbevgB

Thankfully, the fire was put out in around 15 minutes or so, due to the work of the firefighters, and it appears nobody was hurt.

What else can go wrong for the #Mets you ask? Oh you know, just a fire at Citi Field moments ago. It was put out within 15 minutes. pic.twitter.com/kKDmTOjcEG

Fans were quick to react to this on Twitter.

While I hope every is ok and safe because of the Citi field fire, it’s just a perfect symbol when our own stadium goes up in flames

Mets announce that Citi Field (Fire) has been placed on the 10 day DL.

The Junkyard just outside has been activated and is available for next homestand.

Citi field catching on fire is the perfect symbolism for this season pic.twitter.com/2tDDR3hFAR

Jacob deGrom lighting the Citi Field on fire after the bull pen blew another lead pic.twitter.com/K7C7TfCLGB

The Mets bullpen was called in to put out the fire at Citi Field but they poured gasoline on it.