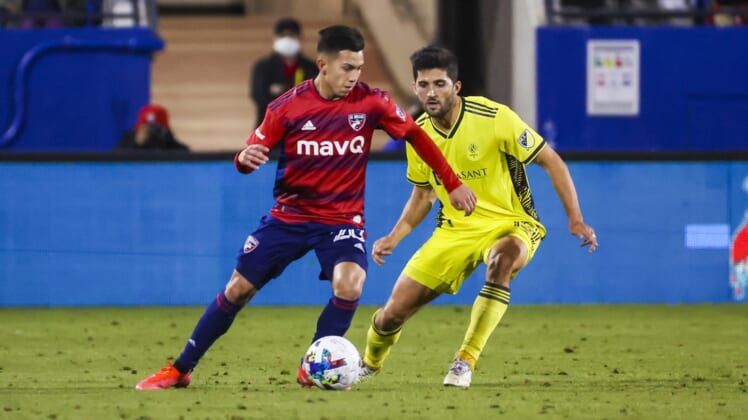 What will Alan Velasco do for an encore when FC Dallas plays host to Portland on Saturday night?

The 19-year-old Argentinian, acquired in the offseason for a reported club-record fee of $7 million, made his debut last weekend against Nashville as a second-half substitute. He took a pass at midfield in the 87th minute, eluded five defenders on his way into the penalty area and chipped the ball off the underside of the crossbar to clinch a 2-0 victory and earn Major League Soccer’s goal of the week.

“What he showed on the field is what we were looking for,” Dallas coach Nico Estevez said. “For that reason, it’s why we made the investment on him.”

Even Velasco’s teammates were impressed.

“What more can you ask for? He came off the bench and gave us a spark, got us a goal, and gave me an assist,” midfielder Brandon Servania said. “I’m looking forward to gaining some more chemistry with him …”

“Overall, very pleased with the beginning of the season,” Timbers coach Giovanni Savarese said. “And now we have another big challenge in Dallas.”

Portland is unbeaten in 10 straight MLS matches dating to last season, the longest active streak in the league.

But the Timbers have historically struggled in Dallas, winning just once there (1-8-4) while being outscored 31-13.

“Going in there to get points is kind of our mindset right now,” Timbers midfielder George Fochive said. “When you go away, you’re in someone else’s home, so you have to make yourself comfortable to compete … it’s not always easy.”