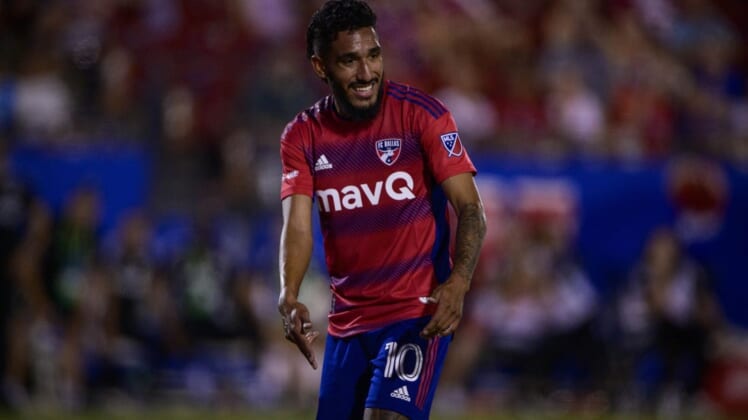 FC Dallas and the Los Angeles Galaxy will look to build on crucial victories when they square off on Saturday in a key Western Conference match in Frisco, Texas.

FC Dallas (8-6-8, 32 points) head to the weekend in fifth place in the West but are just two points ahead of the seventh-place Galaxy (9-9-3, 30 points) and eighth-place Portland and only three points ahead of ninth-place Seattle.

Portland and Seattle are the next two opponents for Dallas, meaning a win could create some breathing room for the home side.

Jesus Ferreira’s goal in the 14th minute produced a 1-0 victory for Dallas on the road at Real Salt Lake last Saturday and allowed it to snap a seven-match winless run (0-3-4). The win was Dallas’ first since May 28; it has recorded just 10 points in its past 11 matches after earning 22 points in its first 11 games of the season.

“We know that in the past few games we’ve deserved to win,” Ferreira said. “We played good games, but our last 10 minutes or last 15 minutes have been poor that we need to work on. The whole team was focused, the whole team had winning on their minds. We know that it wasn’t pretty, and we had to suffer, but the job got done.”

The Galaxy head to Texas on the heels of a 2-0 home win over Atlanta United on Sunday. Los Angeles’ victory snapped a three-match losing streak.

Kevin Cabral scored his first goal of the 2022 MLS season in the seventh minute to give Los Angeles the early advantage. Atlanta pressured for the equalizer throughout the second half, but the Galaxy defense held strong. In the final minute of extra time, Dejan Joveljic notched his ninth goal of the season to seal the win.

Joveljic’s goal on Sunday was his MLS-leading sixth as a substitute. He is first player in Galaxy history to score six times as a substitute in single MLS season.

“I have to say that I’m happy,” Joveljic said. “I mean, I have to do my job even if I play 15 minutes, five minutes, 90 minutes. My job is to score, and I showed it again. My job is to do the best that I can in that moment. So, I will continue like that.”

FC Dallas have won five consecutive home matches against the Galaxy dating back to 2016.