Fast start propels Oklahoma to win over No. 22 Oklahoma State 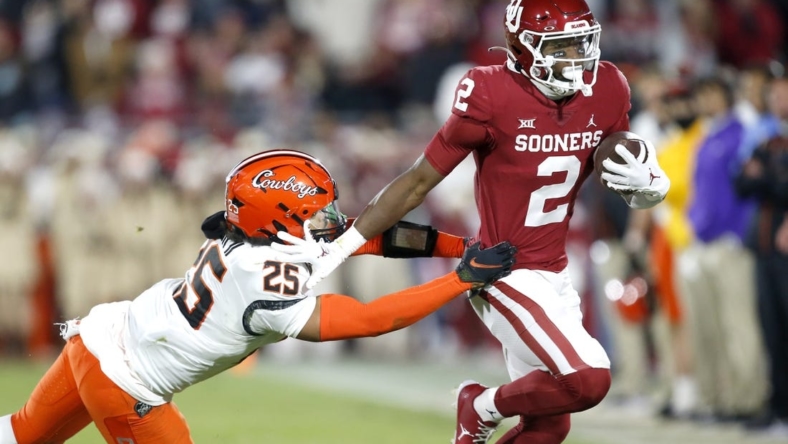 Dillon Gabriel threw for 259 yards and two touchdowns to lead Oklahoma to a 28-13 win over No. 22 Oklahoma State on Saturday in Norman, Oklahoma.

The Sooners jumped out to a big lead early, with four first-quarter touchdowns, to reach bowl eligibility for the 24th consecutive season.

Oklahoma’s active bowl streak is the second-longest in college football, behind only Georgia.

Oklahoma needed less than 90 seconds to get on the board, with a quick 75-yard touchdown drive to start the game.

After a quick three-and-out by Oklahoma State, the Sooners once again quickly drove down the field, with Gabriel hitting Jalil Farooq for a 30-yard touchdown.

But only one of those interceptions – Jonah Laulu’s 26-yard return to the Oklahoma State 4 – turned into points.

The Sooners outgained the Cowboys 299-61 in the first quarter. It was the second-most yards in a quarter in Oklahoma history.

After that, things slowed considerably for the Sooners’ offense, as they had just 135 yards of offense in the final three quarters.

Gabriel didn’t complete a pass in the second half until less than nine minutes remained in the game.

Eric Gray narrowly missed what would’ve been his fifth consecutive 100-yard rushing game, finishing with 20 carries for 90 yards and a touchdown.

Drake Stoops had six catches for 89 yards and a score.

Spencer Sanders finished 36 of 67 for 381 yards, a touchdown and four interceptions for the Cowboys. Brennan Presley had nine catches for 118 yards and Braydon Johnson seven catches for 109 yards.

Oklahoma finished just 1 of 14 on third down.