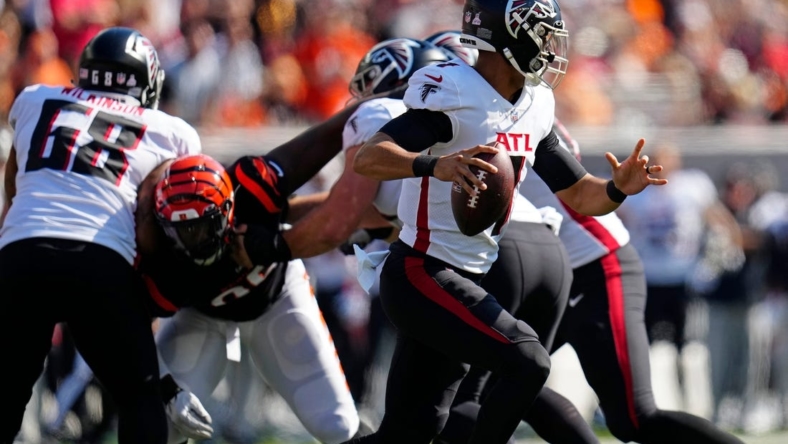 Perhaps because they’re in the NFC South, the Carolina Panthers and Atlanta Falcons are right in the thick of a divisional title race.

The Panthers, despite their snags, have the right formula against divisional opponents and they’ll try to capture another victory when they take on the Falcons on Sunday afternoon in Atlanta.

“Really, another opportunity to climb our way back into this,” Panthers interim coach Steve Wilks said.

The Panthers (2-5) have won twice — both at home against NFC South teams. So, topping the Falcons (3-4) would give them a sweep of the first half of games versus divisional foes.

“That’s what I love about the league,” Falcons coach Arthur Smith said. “We’ve got 10 games left. We’re right in the middle of it. Not where we want to be, but the reality of it is, there’s a long season ahead of us and we’ve got an opportunity to win a division game.”

The oddity of Carolina’s triumph last week against Tampa Bay came because it was the first home game since Wilks replaced the fired Matt Rhule and came just a few days following the trade of star running back Christian McCaffrey.

So, it’s a bit of a stretch to suggest that all the kinks have been worked out.

Despite a list of possibilities at quarterback as Baker Mayfield could be ready to return to action and Sam Darnold is getting closer, PJ Walker will remain Carolina’s starter after a solid outing.

“Really commanding the offense, pushing the ball down the field,” Wilks said of Walker.

Walker said it has been important to keep a heavy dose of self-esteem.

Panthers running back Chuba Hubbard missed Wednesday’s practice with an ankle injury. But with D’Onta Foreman’s strong showing last week with 118 rushing yards, Carolina might be OK there.

The Panthers might look to exploit Atlanta’s secondary, where injuries have been devastating. Safety Jaylinn Hawkins is out with a concussion. Cornerbacks Dee Alford (hamstring) and AJ Terrell (hamstring) remain on the injured list, though Alford was at practice Wednesday.

Atlanta gave up a season-high point total in the 35-17 loss last week at Cincinnati.

The Falcons have tried to adjust with their rushing attack since Cordarrelle Patterson went out with an injury. Tyler Allgeier has filled in, posting 57.5 rushing yards per game over the last four contests.

Atlanta needs a ground attack unless quarterback Marcus Mariota gets in a groove. The Falcons rank second-to-last in the NFL with 151.7 passing yards per game.

“It’s not just simplify,” Smith said. “There are other things we can do and I will do. That’s probably the simplest way I can put it.”

The Panthers, while stingy on defense against Tampa Bay, missed opportunities to make more of an impact. Collecting more turnovers is one of the unit’s objectives.

“We need those game-changers in order to win the football game,” Wilks said. “The details are there for us to get better. We need to make sure we make those corrections.”

The Falcons hold a 34-20 series lead on Carolina, including a 19-8 home record. The Panthers have won in their last two visits to Atlanta.