The NFL sent a whopper of a message to Ezekiel Elliott on Friday, suspending the Dallas Cowboys’ running back six games for his alleged involvement in several domestic violence incidents.

Not only has Elliott been suspended six games, the NFL threatened further action should the running back not remain clean (in their eyes) off the field. In fact, the league told Elliott that he could be banned from the game for any further violations.

The league also made sure to note that the investigative process many had believed was drawn out was exhaustive.

“League investigators examined all available evidence, including photographic and digital evidence, thousands of text messages and other records of electronic communications,” the NFL said in a statement on Friday.

There are so many different aspects to the NFL’s decision to suspend Elliott. Here’s a young man that was not charged with a single crime off the field relating to these alleged domestic violence situations.

As we have seen in the not-so-distant past, convictions in the American justice system are not the only pretext the league will use when ultimately deciding on punishment under the guise of its Personal Conduct Policy.

While Brady’s case did not involve domestic violence, it’s the most-recent case study we should utilize in terms of drawing a conclusion about future legal proceedings surrounding Elliott.

Let’s also be clear here. There will be an appeal on Elliott’s behalf. That will come officially within the next three days. Once said appeal is heard and decided on, that’s when we will get into the legality of the decision the NFL made on Friday.

Cowboys owner Jerry Jones is said to be furious with the NFL’s decision to suspend his running back.

Cowboys' owner Jerry Jones is said to be furious with NFL decision, per one source. Furious.

More than that, it appears that Jones himself will be used as the catalyst to show support for the second-year running back.

#Cowboys source on how they'll show support for Ezekiel Elliott moving forward: "Jerry (Jones) will handle anything on our end."

This is where it gets interesting from a legal standpoint. The Patriots themselves had plenty of pretext to support Brady in court proceedings because the NFL levied the team with a substantial fine and stripped the defending champs of a first-round pick due to Deflategate (more on that here).

Jones’ stance on the topic will be much like what we saw from Al Davis and his Oakland Raiders during the late-great owner’s heyday. Simply put, Jones comes from the Davis’ school of not backing down from the NFL.

It’s in complete contrast from what we saw with Robert Kraft and the Patriots, an organization that has usually toed the league line on matters of this ilk. 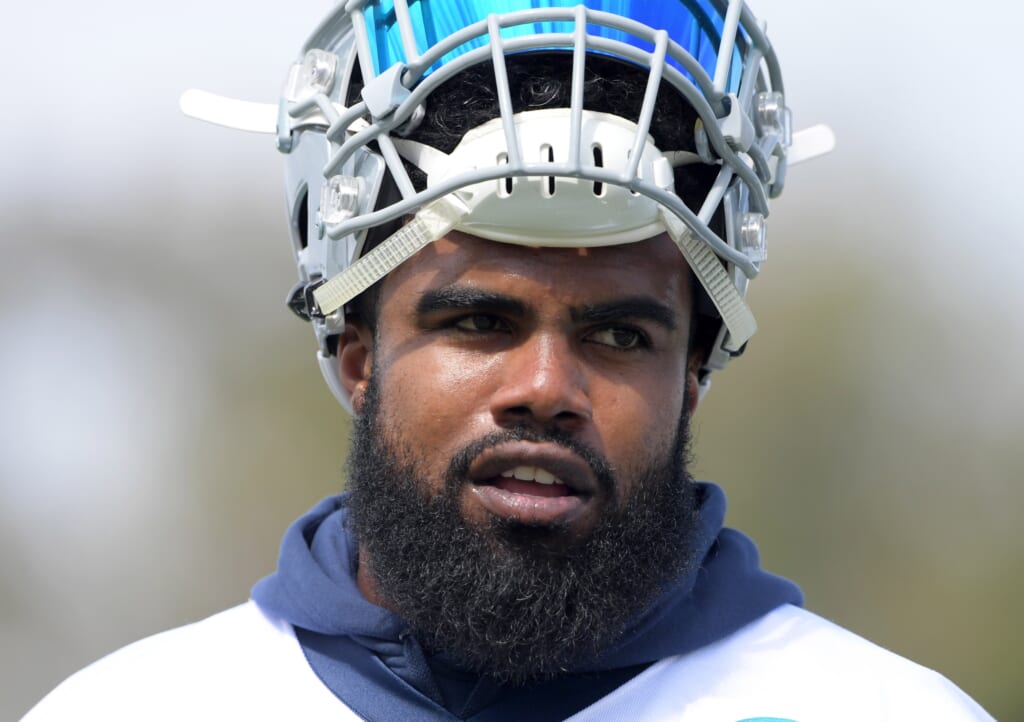 For his part, Elliott is willing to see this entire thing through in the court room. It’s something Brady and his representatives indicated they were going to do before ultimately backing down prior to the case going further in the federal justice system, including the United States Supreme Court itself.

Elliott’s first order of business, should the NFL deny his appeal, will be to seek an immediate injunction (through the NFLPA) with a United States District Court. In this case, that would likely be in Southern New York — the very same court that vacated Brady’s suspension initially. Should that take hold, the United States Court of Appeals would get involved.

This specific court has a history of siding with corporations over unions, as evidenced with its decision to reinstate Brady’s suspension, which was in direct contrast with the lower-court ruling.

This is where legal mumbo jumbo could cloud general interest in the case.

In the ruling that reinstated Brady’s suspension, the court ruled that the NFL’s decision to discipline New England’s quarterback “met the legal standards established by the Labor Management Relations Act of 1947.”

The Labor Management and Relation act, also known as Taft–Hartley Act, was a major point of contention around the United States some 70 years ago. It became the law of the land, even after then President Harry S. Truman vetoed the bill. For those in favor of increased worker rights, this was a major hit. Opponents called it the “slave-labor bill.” Meanwhile, Truman himself decried the bill as a “dangerous intrusion on free speech.”

This bill had wide-ranging ramifications on the rights of unions when faced with corporate greed. In general, the bill gave more power to corporations, indicating that a strong economy was dependent on seamless labor relations.

Basically, the court indicated that through collective bargaining and as a private entity, the league had a right to discipline Brady solely based on its own internal investigation. That the feds didn’t have jurisdiction over an internal matter — hence, the use of the Labor Management and Relation as a guise to reinstate Brady’s suspension.

In reality, the law of the broader United States had no direct role in what the NFL itself deems to be justified in its eyes. 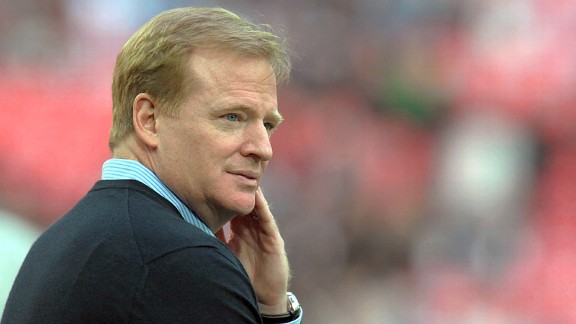 The complications here are vast in terms of legality. Even if the NFL has the right to discipline Elliott as it sees fit, the arbitration process, including appeal, could potentially violate federal law. Remember, Goodell acted as a major power-player in the appeals process surrounding Brady. This came after Goodell himself played a role in the initial suspension.

In layman terms, the counter-argument to Goodell’s power is that he played the role of judge, jury and executioner. And there’s precedent at a federal level that suggests he doesn’t have this specific arbitration right.

Back in 2015, the Missouri Supreme Court handed Goodell a major defeat in relation to his collective bargaining power. In short, the court invalidated Goodell’s power of arbitration pertaining to league employees in that state.

As this scribe noted at the time, the ruling showed that there are inconsistencies within the NFL’s constitution and bylaws.

“Section 8.3 gives the commissioner complete control and final jurisdiction to arbitrate any dispute between any player, coach or other employee of the league.”

Section 8.2 of said constitution and bylaws runs somewhat contrary to this, at least according to the Missouri Supreme Court.

“Commissioner shall have no financial interest, direct or indirect, in any professional sport.”

If the NFLPA and Elliott’s representatives, some of who might be hired by the Cowboys themselves, argue this in court, it could set a larger-scale precedent than the 2015 case.

The argument here could be that by suspending Elliott and docking him pay for the six games (a significant amount), the NFL’s financial bottom line has been impacted. In the same vein, the league’s public persona could change to an extent due to a consumer base that has in the past questioned the league’s seriousness in handling domestic violence cases.

More than that, Goodell himself seems to be cherry-picking suspensions rather than using concrete standards. This has already been brought up by Elliott’s attorney in the case.

The short of it is that Elliott and the NFLPA has solid footing to stand on here. It will be a drawn-out process that includes major bumps in the road for both the league and what will ultimately be the plaintiffs.

Some will argue that the NFLPA gave power away to the league during the 2011 Collective Bargaining Agreement. And that’s true. But a weak union, led by Executive Director DeMaurice Smith, is not an excuse for invalidating the right of members of said union. That was made clear in the aforementioned Labor Management Relations Act of 1947.

More than anything, we’re going to want to see who handles the case at every turn. Activist courts tend to side with unions over corporations as a way to throw out a perceived monopoly that’s slanted against worker rights. And with the NFL being one of the largest entities in the entertainment industry, this would be a good case to utilize an activist mentality as to make a point against the larger construct of corporate/union relationships in the United States.

On that same note, the United States Supreme Court itself could see a reason to get involved. Unchecked powers of private entities pertaining to their employees is something that has caught SCOTUS’ eyes in the past. With the NFL and NFLPA increasingly at odds over its current CBA, the land’s highest court might very well decide to put this on the docket.

For Elliott and the Cowboys, the micro aspect of this case is to make sure he’s on the field and ready to help the team compete for a Super Bowl title this season. And in reality, that’s looking increasingly likely if Elliott is willing to take the league on.

The macro aspect of this case is more in-depth. It includes a union pushing back against a commissioner that has seemingly overstepped his authority.

Even though the Patriots were willing to let Goodell off the hook, that doesn’t mean Jerry Jones and Co. will be willing to do the same thing. Add in an increasingly weak union that needs to draw a line in the sand, and it makes perfect sense to take this case as far as possible.

The future of NFL collective bargaining and the health of the league itself could depend on it.