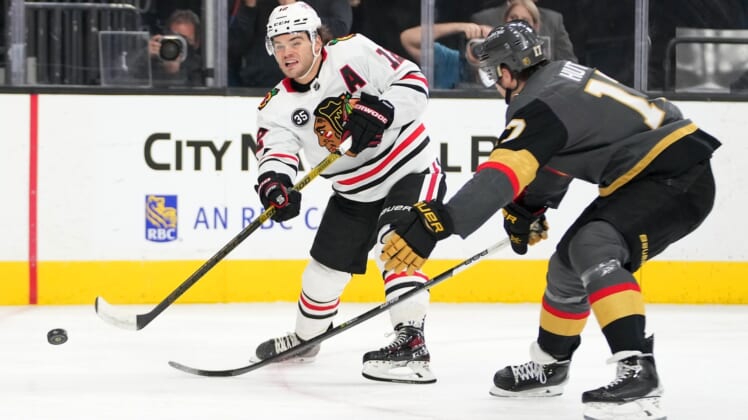 Evgenii Dadonov scored 2:05 into overtime as the Vegas Golden Knights rallied from a 3-0 third-period deficit to defeat the Chicago Blackhawks 5-4 Saturday in Las Vegas.

Dadonov, who rejoined the Golden Knights on Wednesday after the NHL nixed a trade to Anaheim on Monday because of his limited no-trade clause, whipped a wrist shot from the high slot over the glove of Chicago goaltender Kevin Lankinen for the game-winner and his 17th goal of the season.

It marked the first time in 58 games in franchise history that Vegas had rallied from a deficit of three or more goals in the third period to win a game.

Chandler Stephenson had a goal and an assist, and Jack Eichel, William Karlsson and Alex Pietrangelo also scored for Vegas. Logan Thompson finished with 30 saves, while Jonathan Marchessault and Nicolas Roy each had two assists.

For Chicago, Jonathan Toews and Alex DeBrincat each had a goal and an assist, and Dylan Strome and Dominik Kubalik also scored goals. Patrick Kane added two assists while Lankinen made 29 saves.

Kubalik gave the Blackhawks a 1-0 lead midway through the first period when he ended a nine-game goalless drought when his one-timer from the high slot deflected off the stick of Vegas defenseman Shea Theodore and trickled through Thompson’s pads.

Toews made it 2-0 at the 14:52 mark of the second period with his ninth goal of the season and fifth in the past nine games. DeBrincat set up the score when he picked up the puck along the right boards and then whipped a crossing pass past two Golden Knight defenders to Toews cutting down the left wing, where he easily redirected it into a wide-open net.

The Blackhawks made it 3-0 just before the end of the period on Strome’s 19th goal of the season. Caleb Jones fired a shot from the high lot that Thompson saved, but he also gave up a long rebound that Strome one-timed from the right circle.

But Vegas rallied to tie the score with three goals in less than two minutes early in the third period. Stephenson started the comeback at the 1:24 mark with a wrist shot from the right circle that beat Lankinen on the far side for his 17th goal of the season.

Karlsson followed 59 seconds later with his ninth goal of the season when he deflected Dylan Coghlan’s point shot. Eichel, left alone in the slot, followed at the 3:16 mark with his seventh goal with a wrist shot around Lankinen.

Chicago regained the lead at the 8:53 mark when DeBrincat beat Thompson with a wrist shot from the bottom the right circle for his 37th goal of the season. But Pietrangelo tied it at 4-4 at 9:40 when his wrist shot from above the circles deflected in off the leg of Kirby Dach stationed in front of the net.