Even Siri considers the Browns a ‘factory of sadness’

We needed to put this theory to the test. Would it work? Is the smartphone assistant by the name of “Siri” in fact making fun of the Cleveland Browns?

Well, the story starts with an article posted by Cleveland.com’s Dan Labbe. Perhaps bored, the scribe asked Siri where the “factory of sadness” was located. Being in Cleveland himself, her results first pointed to FirstEnergy Stadium, the home of the Cleveland Browns.

That’s some pretty awesome sarcasm from the artificial intelligence right there.

Attempting to expand this theory further, I personally asked Siri where the “factory of sadness” was located. Considering I am in Northern California, the expectation was that she’d come up with a bunch of factory outlets in the Bay Area.

Boy, was I wrong: 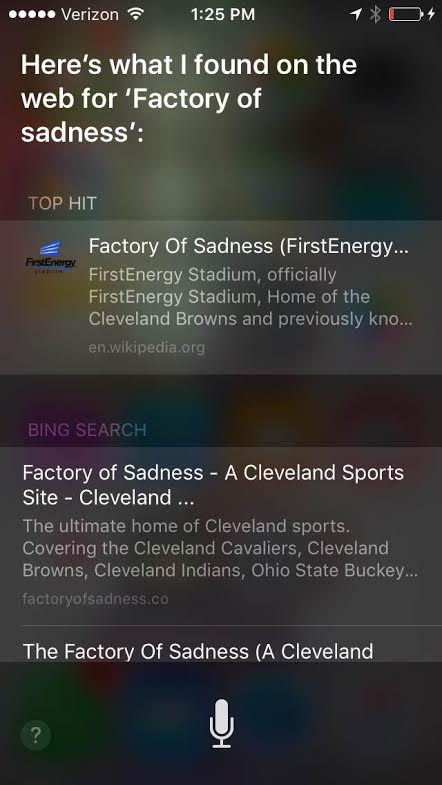 When a smartphone app is making fun of your organization, you know something is wrong.

Without a playoff appearance since 2002 and with only two winning seasons over the past 21 years, the Browns have indeed been a factory of sadness.