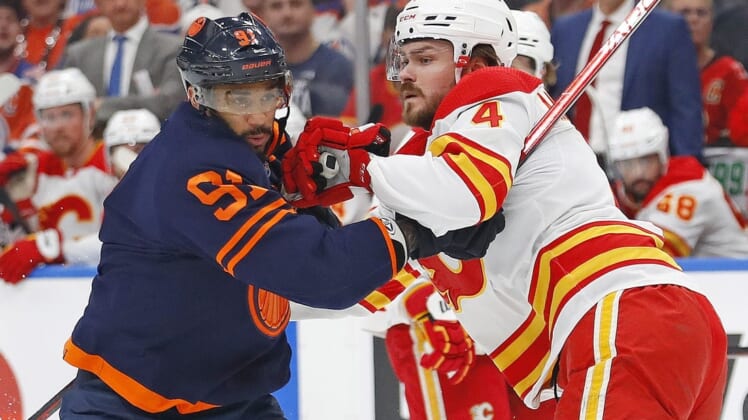 Evander Kane collected a natural hat trick while Leon Draisaitl set an NHL record with four assists in a period as the host Edmonton Oilers posted a 4-1 victory over the Calgary Flames on Sunday night to pull ahead in their Western Conference second-round playoff series.

Connor McDavid collected three assists and Zach Hyman scored once for the Oilers, who lead 2-1 in the best-of-seven series.

Oilers goaltender Mike Smith stopped 32 shots en route to recording the shutout but was pulled from the game due to concussion protocol after Calgary’s Milan Lucic drove into him midway through the third period. Smith returned after missing four-plus minutes. Mikko Koskinen wasn’t forced to make a save.

Game 4 will be Tuesday night in Edmonton.

The Oilers carried play from the start, outshooting the Flames 21-7 in the first period, and were rewarded 52 seconds into the second period. Hyman found the mark from the bottom of the right circle for his third goal in as many outings and sixth goal of the playoffs.

Kane doubled the lead at 6:58 of the period when he finished the passing play on a rush, and he scored his second goal of the game 53 seconds later, a tap-in tally set up by McDavid after making a jaw-dropping play on the rush before feeding the pass across.

Kane completed the hat trick with 7:02 remaining in the period when he teamed again with McDavid on a two-on-one rush for his 10th goal of the playoffs.

McDavid became the first player in history to record nine multi-point games in the first 10 games of a playoff run. He also is the sixth player to have a multi-point streak of six or more games.

McDavid is the fourth player in history to have 23 or more points in 10 games to start the playoffs, joining Gretzky, Mario Lemieux and Rick Middleton.