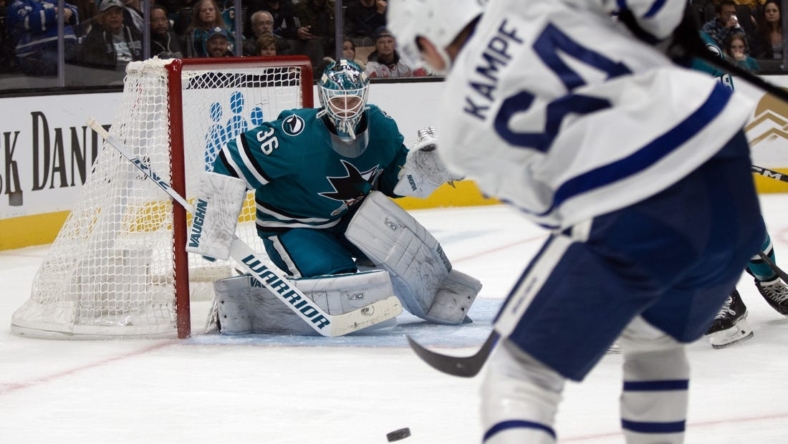 Timo Meier earned the assist on Karlsson’s fourth goal of the season and his second in overtime this season.

Logan Couture had two goals to reach 300 for his career and added an assist for the Sharks. Meier also scored for San Jose.

Karlsson and Alexander Barabanov added two assists each for the Sharks, who won for the first time at home this season.

Mitchell Marner had a goal and an assist for the Maple Leafs, who have lost two straight. David Kampf and Auston Matthews each scored a goal. Alexander Kerfoot had two assists.

Erik Kallgren made 27 saves for Toronto.

Couture scored 26 seconds into the first period when he won the race for a loose park near the net. Matt Nieto and Barabanov earned assists.

Kampf scored his third of the season at 5:14 of the first period from the left circle on a short, smart pass from Kerfoot. Marner earned the other assist.

Toronto had a 9-5 advantage in shots on goal after one period.

The Sharks took advantage of two simultaneous penalties called on the Maple Leafs at 4:33 of the second period — Pierre Engvall for hooking and TJ Brodie for tripping.

Couture scored his fourth of the season at 5:15 of the second from the edge of the crease on Barabanov’s pass. Karlsson also earned an assist.

Meier scored his first of the season 42 seconds later. Couture and Karlsson picked up assists.

Marner scored his second goal of the season at 19:37 of the second after a Sharks turnover, converting Morgan Rielly’s pass to the front or the net, Kerfoot also got an assist.

San Jose had a 19-15 edge in shots on goal after two periods.

Matthews scored his second goal of the season at 5:38 of the third period. John Tavares and Rielly earned assists. Karlsson was serving a delay-of-game penalty.