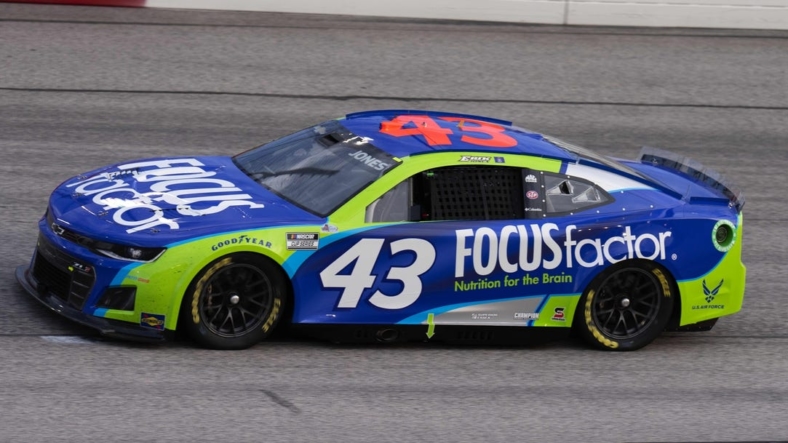 Ineligible for the postseason, Erik Jones struck the first blow in the opening race of the NASCAR Cup Series’ playoffs, winning Sunday night’s 73rd Cook Out Southern 500 for the second time at Darlington Raceway in Darlington, South Carolina.

Getting set for a restart with 24 laps to go, leader Kyle Busch’s No. 18 started billowing smoke. Busch, who led six times for a race-high 155 laps, came to the pits as his night ended with a 30th-place finish.

That put Jones’ No. 43 Petty GMS Chevrolet into the lead, and the Byron, Mich., native won a 20-lap shootout with Denny Hamlin for his third career win and second in the Southern 500 (2019).

In addition to Busch, five other playoff contenders had problems in the first playoff race.

Kyle Larson, the reigning series champion, developed problems within the first 70 laps, wrecked later but finished 12th a week after engine failure at Daytona left his No. 5 Chevrolet in 37th.

Elliott retired his No. 9 Chevrolet in 36th — last in the field — while Briscoe came home 27th.

Ross Chastain, a two-time winner this season, pitted with a suspension problem on Lap 160 and came in 20th.

With 93 laps remaining, Kevin Harvick’s No. 4 Ford blew up on the front straightaway. The car burst into flames on the apron between Turns 1 and 2, and Harvick climbed out safely.

“I’m sure it’s just the crappy parts on the race car like we’ve seen so many times,” said Harvick, who finished 33rd. “The car started burning … and the flames started coming through the dash.

“What a disaster, for no reason,” he added. “We didn’t touch the wall, we didn’t touch a car and here we are in the pits with a burned up car and can’t finish the race in the playoffs.”

With two circuits to go in the first stage, Elliott lost control of his car by himself in Turn 4, then was hit by Briscoe. William Byron, who earlier passed Logano, drove off to the Stage 1 win under caution.