Either the Jets are tanking, or everyone needs to be fired

The New York Jets ranked dead last in DVOA last season, finishing dead last in the AFC East. This offseason, they got worse. The Jets possess the worst roster in the National Football League and it isn’t a close race.

This is the only team that could be jealous of what the Cleveland Browns have at quarterback. Right now, it looks like Josh McCown — a Browns cast-off — will start the season under center. The 38-year old McCown played just five games last season and was just horrible. He had a 35.2 QBR and -269 DYAR, throwing for as many touchdowns as interceptions.

The temptation will be to start either Bryce Petty or Christian Hackenberg — two younger quarterbacks — but it’s hard to make a good argument doing so. Thing is, neither Petty nor Hackenberg are good — they’re just young.

Petty got what amounted to a tryout last season and had a 5.3 percent interception rate over 133 attempts. He struggled to move the ball down the field and averaged just 3.25 adjusted net yards per attempt.

As for Hackenberg, a second round pick in 2016, all you have to do is watch the tape of Saturday’s preseason game against Detroit to see that he has a long way to go. His accuracy is the same as a blackout drunk guy throwing darts from 100 feet. He has no pocket awareness whatsoever and it’s hard to find something he does well besides arm strength. Despite being a second-round pick on a bad team that needed a quarterback, Hackenberg wasn’t active for one game last season. It’s easy to see why.

The receiving corps doesn’t exactly help the situation. After Quincy Enunwa was placed on IR, it looks like Robby Anderson is set to be the No. 1 receiver. Anderson had just 42 receptions for 587 yards last season. He ranked 81st among receivers in DVOA and 80th in DYAR. Second-year man Jalin Marshall will get a fair share of targets as well after his four-game suspension ends. Marshall mostly played as a kick returner in his rookie year, but he caught 14 balls on 23 targets as well. At this point, the Jets will take help wherever they can get it. 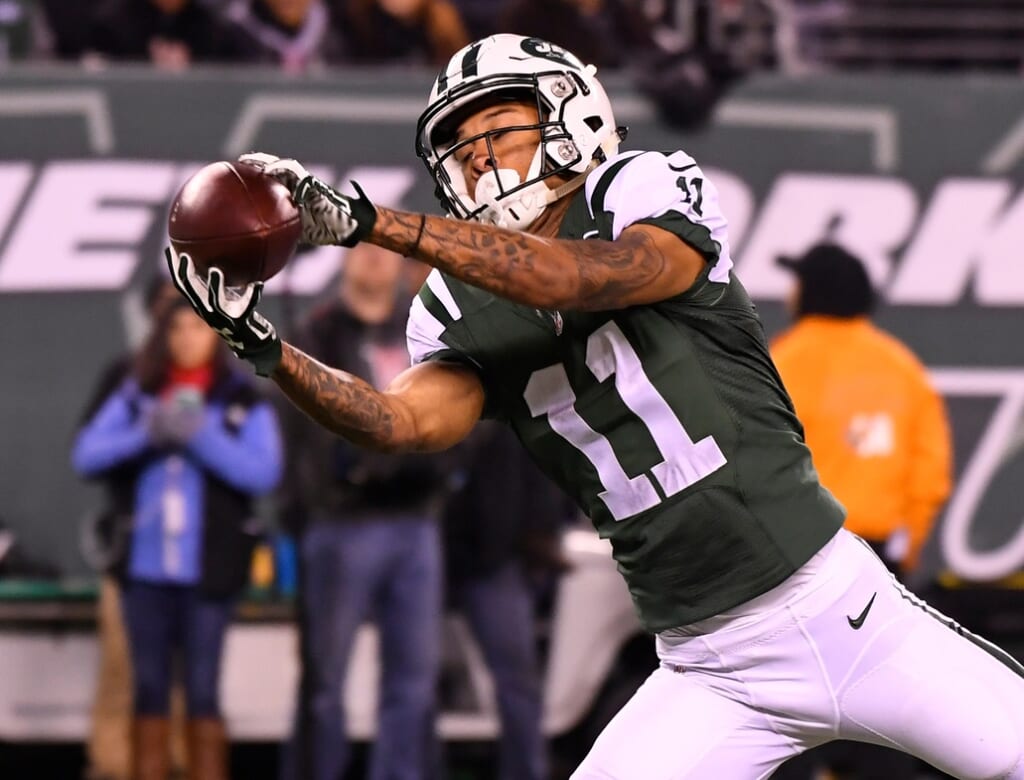 The Jets did take a receiver in the third round of the draft as well: Alabama’s ArDarius Stewart. Taking a receiver was the right move, but Stewart was the wrong choice. He has good speed and ability after the catch, but Stewart is a sloppy route runner with a tendency to meander at the line of scrimmage. That will hurt him in the NFL, especially when opposing defenses play press coverage, which Stewart rarely saw at Alabama. He can find holes against a zone, but Stewart has hands issues. In this system, where defenses will have the resources to devote attention to Stewart, it’s hard to see him succeeding immediately.

If any part of the offense has a chance to be competent, it’s the run game. Bilal Powell quietly had a great 2016, ranking fourth among running backs with a 56 percent success rate and averaging 5.5 yards per carry. Matt Forte can contribute as a pass catcher on third down, but don’t be surprised if Powell does that as well. He had 58 receptions last season, nearly double Forte’s total.

Of course, the problem with relying on the run game is that the Jets don’t have a passing game. Teams can load up with eight men in the box without fearing anything against New York and the offensive line is nowhere near good enough to stop them. Newly acquired Kelvin Beachum allowed six sacks with the Jaguars last season, blowing 14 pass blocks in total, per Football Outsiders’ Almanac. His 49.9 PFF grade was 63rd among tackles. Across from him at right tackle, Brandon Shell played just eight games last season but was solid, posting a 79.4 PFF grade. The interior is fine, as left guard James Carpenter is the best player on this line. Right guard Brian Winters won’t kill them. He had a fairly ordinary 75.6 PFF grade last season. The center position may be a disaster. Wesley Johnson played just eight games last year but blew eight pass blocks, per FOA, and had a 53.6 PFF grade. It’s not that this line is especially bad, but it isn’t good enough to withstand teams sitting on the run as the Jets’ opponents will undoubtedly do.

The only reason to watch this team on a weekly basis is the defensive line. Despite being godawful in every other imaginable category, the Jets were first in run defense DVOA last season thanks mostly to the trio of Leonard Williams, Sheldon Richardson and Muhammad Wilkerson. Williams, the sixth overall pick in 2015, has quickly developed into one of the league’s best 3-4 ends. His 88 percent run stop rate ranked 17th among defensive linemen last season, per FOA. Williams also had 7.0 sacks, 14 hits and 29 hurries to boot, per FOA. Pass rushing is a part of his game that the Jets focused on developing last season. Richardson had an absurd 91.0 run defense grade from PFF, and his overall 81.6 grade ranked 19th among interior defenders. As for Wilkerson, his 86 percent run stop rate was only a stone’s throw behind Williams’, according to FOA. 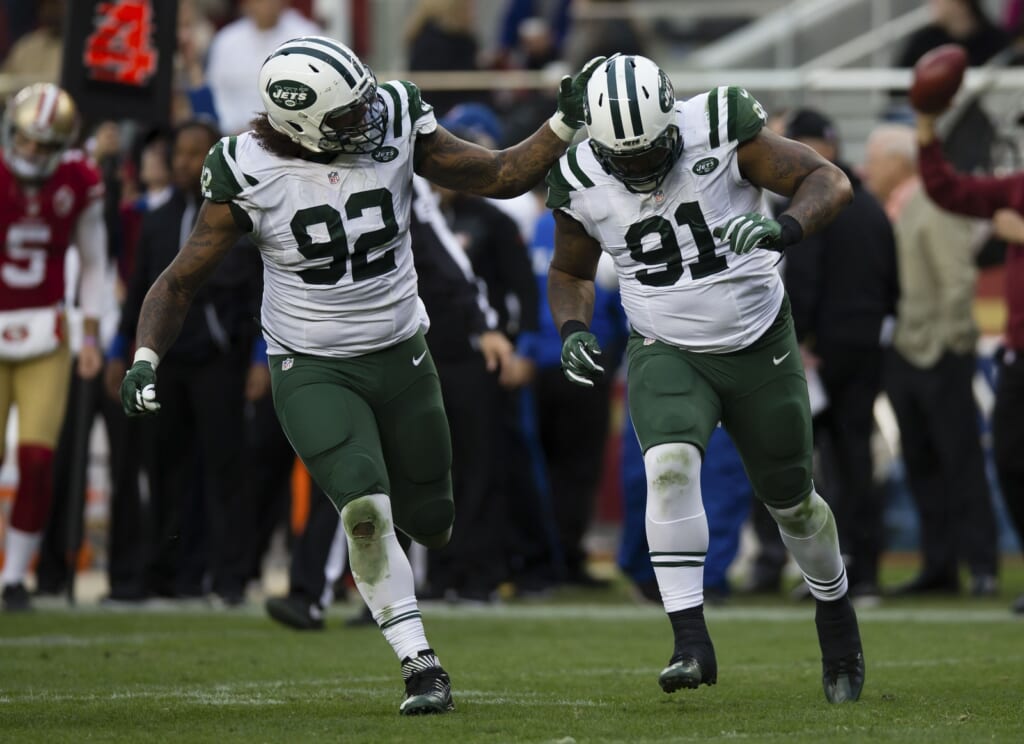 Unfortunately, that’s about where the firmly positive aspects of the Jets’ defense begin and end. Without some sudden development on the part of Darron Lee, the linebacking corps is a black hole. Lee had an abysmal 36.2 PFF grade last season to go with a 42 percent success rate in coverage, per FOA. However, at age 23 he’s still redeemable. Next to Lee, Demario Davis is just as bad in coverage. Davis had a 45 percent success rate and allowed 7.7 adjusted yards per target last season with the Browns, according to FOA. At outside linebacker, Lorenzo Mauldin is a solid run defender whose 83 percent run stop rate ranked 14th among edge rushers, per FOA. Across from him, the 23-year old Jordan Jenkins showed some potential as a pass rusher last season. However, it’s tough to get excited about the 2.5 sacks, one hit and 15 hurries he put up, per FOA, especially when he had a paltry 69 percent run stop rate.

New York clearly went into the draft with a plan to solidify the safety position for a long time. They took Jamal Adams and Marcus Maye with their first two picks, including Adams at sixth overall. The book on Adams is that he’s a future box safety who can make a big impact in run defense. He has all the right instincts to do that, but unless he gets better at tackling, run defense could turn into more of a negative than a positive. It could be that Adams becomes a slot corner in the long run — position-wise, he’s pretty versatile. He displayed good hip fluidity and went into the slot as needed at LSU. Expect the Jets to try him in man against big tight ends this season. All things considered Adams was easily the best safety in this class. As for Maye, the Florida product is a ball-hawk whose tackling ability could make up for Adams’ deficiencies in that department. Maye missed just one tackle last season, per FOA. Speed limitations could keep him from being effective in deep zones, but Maye is good in coverage. If his hip fluidity becomes more consistent — it was choppy at times in college — he’ll be an effective player in the long run. However, don’t expect this duo to wow you this season. They’re both rookies, and the rest of the Jets’ secondary is lacking.

The lone exception to the last sentence is Morris Claiborne. He played just seven games last season, but if the 27-year old stays healthy, he is a clear upgrade over Darrelle Revis. Claiborne had a 62 percent success rate last season, albeit over a small sample size, along with an 84.0 PFF grade. At minimum, he’s capable. As good as Claiborne was over a small sample last season, Marcus Williams was just as bad. In a rotational role that saw him play 457 snaps, Williams had an abysmal 36 percent success rate and allowed 11.8 adjusted yards per target, according to FOA. At nickel back, Buster Skrine’s 39 percent success rate ranked 83rd among corners, per FOA. In other words, it won’t be especially hard to beat the Jets in the air.

All in all, the Jets are probably tanking this season. If not, everyone should be fired immediately because it sure looks like it. 2017 is going to be very painful for this franchise. But if they come out of it with the No. 1 pick — likely USC’s Sam Darnold — it will be worth it.