Prognosticators generally have a good idea of what to expect during the upcoming campaign, but the 2015-16 season has still brought a few surprises and disappointments heading into the NBA All-Star break.

The list includes both teams that and individuals who are surpassing or falling short of expectations. Although the latter portion of the year may not follow suit, the following items are what we perceive as the regular season’s biggest unexpected storylines so far. 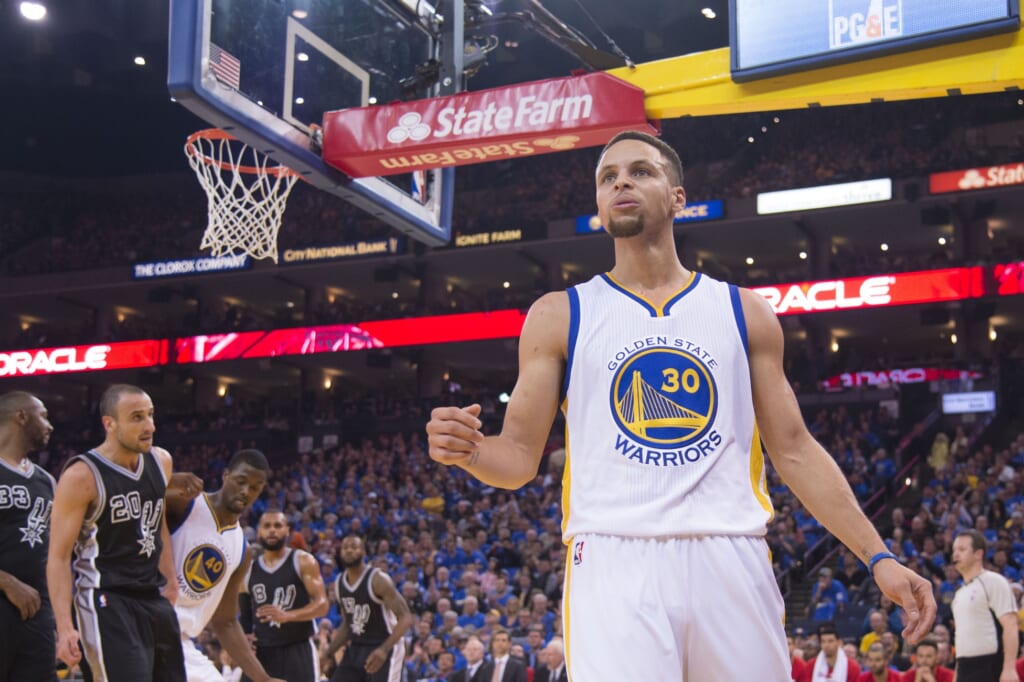 How often does the league’s reigning MVP start performing at a level we’ve never seen? Stephen Curry isn’t just putting up video-game numbers. He’s quite literally playing better than a technological version of himself.

Curry has spearheaded a potentially legendary Golden State Warriors squad that is 48-4 — a new record for the best start in NBA history. The Dubs are undefeated (24-0) at Oracle Arena.

Draymond Green’s emergence as a nightly triple-double threat is a massive factor, but Curry is averaging 29.8 points while shooting 45.4 percent from three-point range. He’s added 6.6 assists, 5.3 rebounds and 2.1 steals per game, and the team is 27.7 points better per 100 possessions with Curry on the floor, per Basketball-Reference. 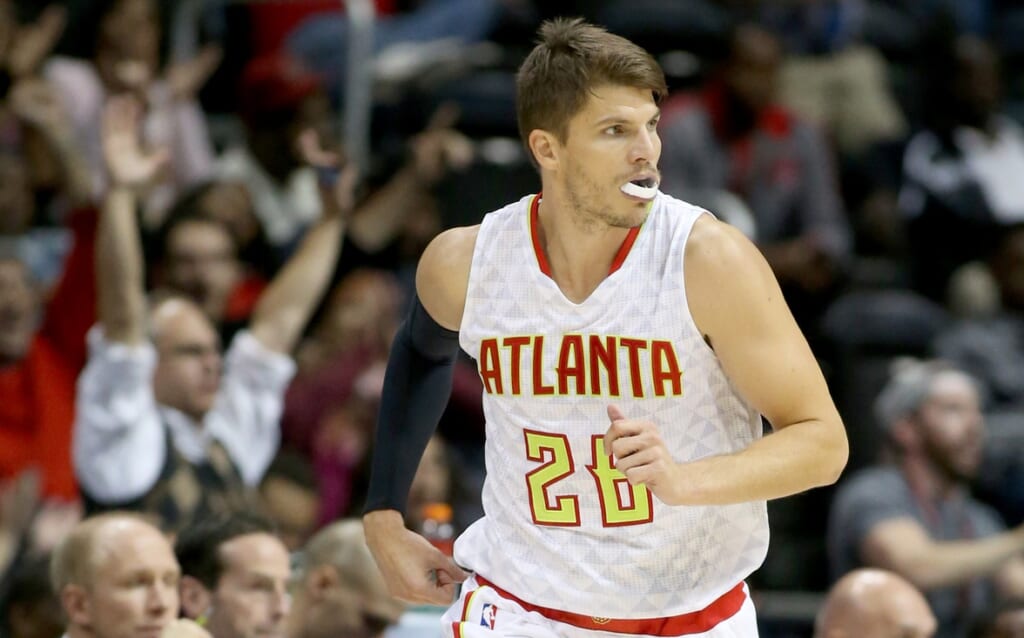 Though the hot-shooting wingman started to find his groove in mid-January, Kyle Korver is currently shooting 38.6 percent beyond the arc — the second-worst clip of his 13-year career.

Considering he buried 49.2 percent last year, this dramatic of a fall was unexpected. At one point, Korver managed to bury just 7-of-45 attempts. He blamed the slump on a tweaked stroke, which Korver has since scrapped and returned to his previous form.

Korver has endured 27 games of a 33.3 percent mark or worse from long range. Last season, he had just 19 such games.

The encouraging note is Korver has drilled 26 of his last 53 triples. However, his time with the Atlanta Hawks might be drawing to a close. ESPN reported the Hawks are dangling Korver on the trade block.

Perhaps he’ll be traded to a stronger contender than Atlanta, which wouldn’t be all bad since the almost-35-year-old is still seeking a ring. Meanwhile, Korver must focus on not reverting to the shooting stroke that inhibited his effectiveness for an ugly stretch. 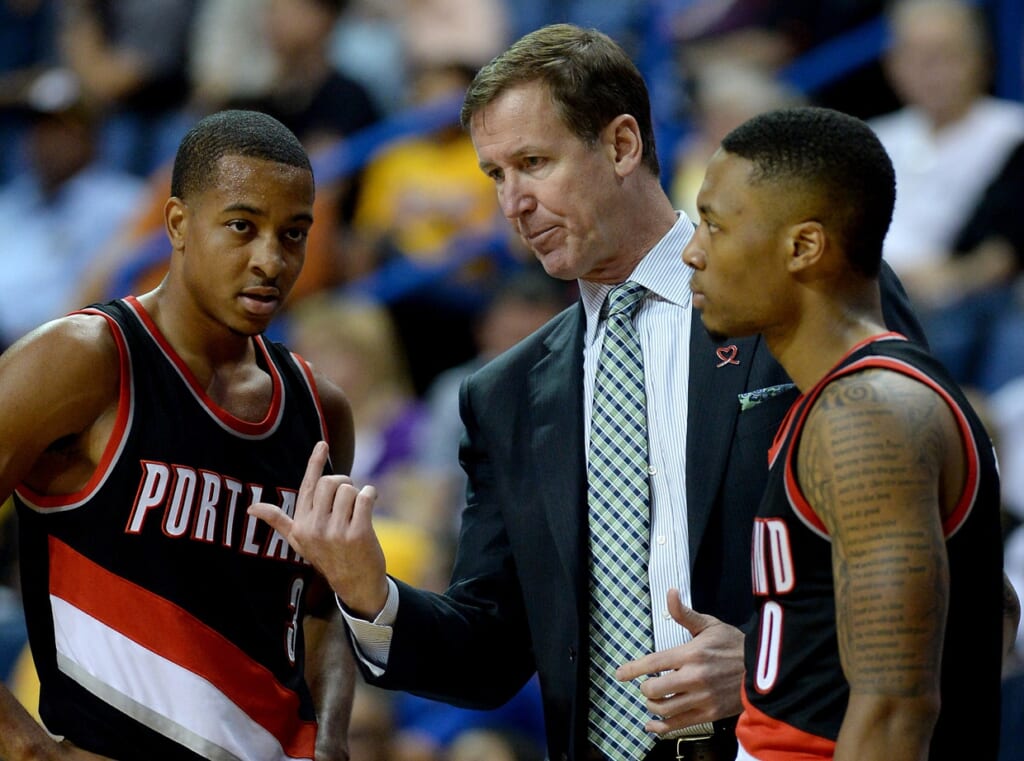 How could any non-homer expect the Trail Blazers to realistically compete in an outstanding Western Conference? Well, the West isn’t as stellar as anticipated, and Portland isn’t as bad, either.

In fact, the Blazers enter the All-Star break at 27-27 on the season and hold the seventh spot in the standings. Largely thanks to C.J. McCollum’s breakout year, the team is a legitimate postseason contender.

Now, Portland is 9-18 against opponents with records .500 or better — the worst of all current Western playoff clubs — so it wouldn’t be wise to jump on that bandwagon quite yet. Still, credit Terry Stotts and Co. for piecing together a strong season at the two-thirds mark. 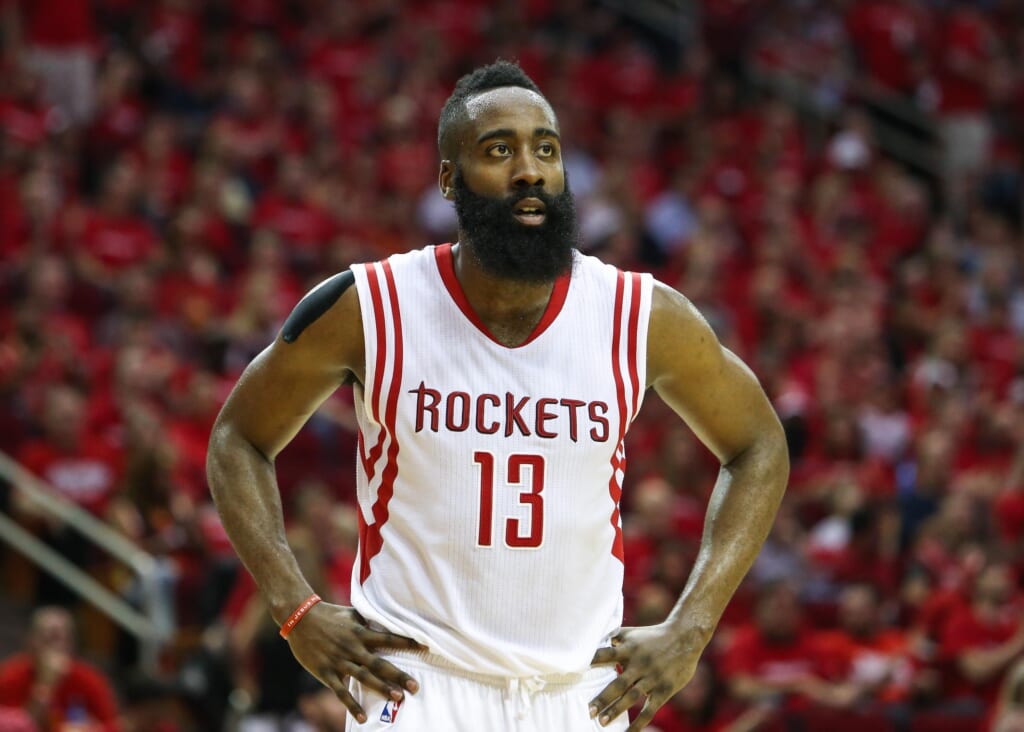 On the complete contrary, the Rockets were expected to be great but are instead a disaster. Their bizarre campaign started with the knee-jerk firing of Kevin McHale after 11 games.

Houston, which finished 56-26 last season, trudges into the All-Star break at 27-28. Per ESPN, interim coach J.B. Bickerstaff called the Rockets a “broken” and “fragmented bunch.” Not exactly a vote of confidence.

James Harden is a defensive mess, but it’s not like that’s breaking news. Houston as a whole is struggling mightily stopping opponents from scoring, given its 106.4 defensive rating only trails the Los Angeles Lakers, Phoenix Suns and Brooklyn Nets, each of which have 14 wins or less.

Fortunately for the Rockets, a mediocre third tier of the Western Conference means they’re only a half-game out of playoff position. Unless Houston shows some dramatic improvement, though, a first-round exit is its ceiling.

Surprise: Kristaps Porzingis is a key for the Knicks 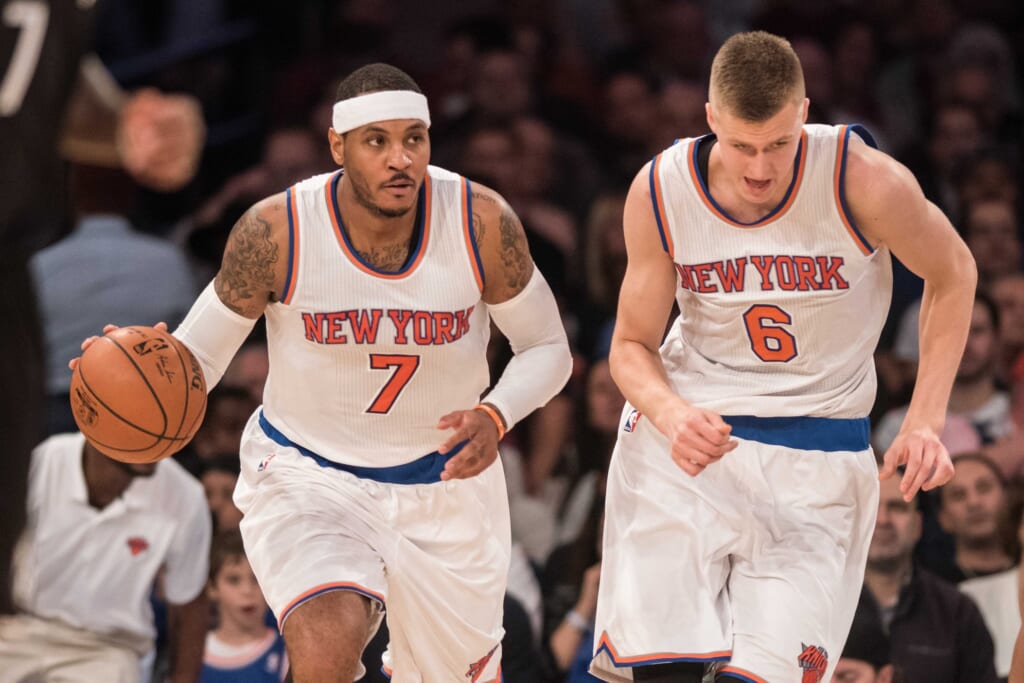 After selecting Kristaps Porzingis with No. 4 pick in the 2015 draft, Knicks president Phil Jackson admitted there would be a maturation process before the Latvian could be a star.

While a 23-32 record and a fired coach might suggest otherwise, Porzingis — along with a couple smart short-term free-agent additions — has helped New York escape the depths of the NBA standings.

Porzingis is posting 13.9 points, 7.7 rebounds and 1.9 blocks per contest. The 20-year-old isn’t “better” than Carmelo Anthony, but Porzingis is clearly the most valuable player on the roster.

It’s too early to declare Porzingis the franchise savior. He’s a particularly young prospect with superstar ability a few years down the road. For now, Porzingis can continue exceeding initial expectations while helping the Knicks stick around the back edge of the Eastern standings.

Disappointment: All-out disaster in the desert 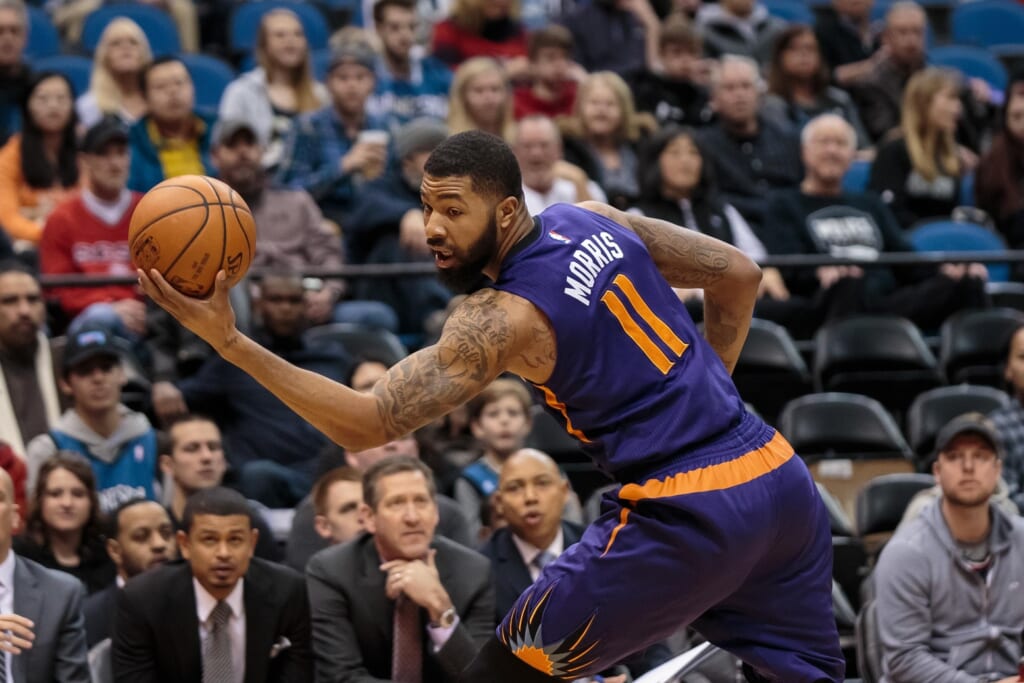 Despite the frustrating offseason for standout power forward Markieff Morris, Phoenix seemed like it would find a rhythm and compete for the final playoff slot in the West. So, um, that was wildly incorrect.

First off, it’s practically impossible to predict non-recurring injuries. Eric Bledsoe underwent season-ending surgery to repair a torn meniscus in his left knee. But Bledsoe’s absence isn’t the only problem.

Morris was unhappy after the Suns traded his brother during the offseason. Team owner Robert Sarver blamed the millennial culture for a “tough time” dealing with setbacks.

After finishing 39-43 last season, the Suns are 14-40 and squarely out of the playoff picture. Soon enough, their — well, emotional and overly physical — leader may be out the door, too. 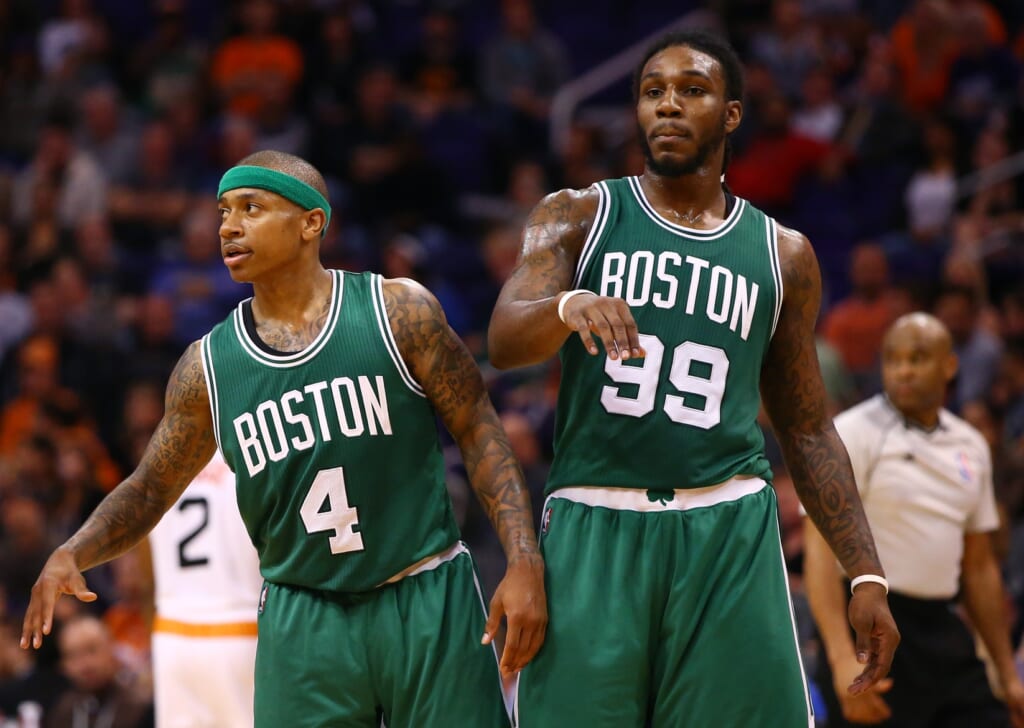 The Chicago Bulls and Toronto Raptors — the latter of which is playing excellent basketball — were considered the top and basically only realistic competition for the Cleveland Cavaliers in the East.

Rather quietly, the Celtics have pushed their name into the picture. Led by Isaiah Thomas, Avery Bradley and Jae Crowder, Boston sports a 32-23 record. Most impressively, neither that trio nor the remaining pieces are considered more than “above average.”

Put simply, an outstanding defense is helping the Celtics win games. They boast the NBA’s best defensive rating excluding the two dominant squads in the San Antonio Spurs and Warriors. When paired with a respectable offense, that’s an undeniably useful combination.

The trade deadline might bring a splashy name like Al Horford, which Boston would need to acquire in order to have a legitimate chance at beating the Western Conference. However, the Celtics could elect to protect their assets, build for the future and vie for an Eastern title as they stand.

Disappointment: Rapid decline of the Pelicans 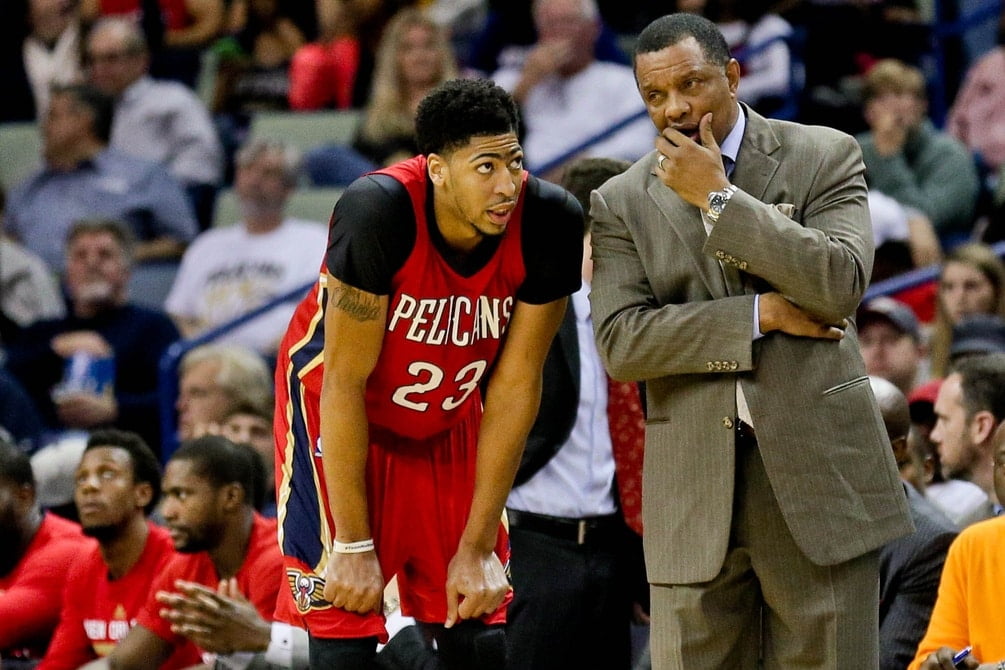 Following a surprising playoff appearance, expectations were raised in New Orleans. Unfortunately, injuries have plagued the Pelicans. Tyreke Evans missed the opening month while Jrue Holiday was on a minutes restriction. Anthony Davis has fought minor issues all year, and Eric Gordon hasn’t played since Jan. 19.

But the sad truth of the matter is New Orleans was no better than a .500 team when at or near full strength. From Dec. 1 to Jan. 25 — the span of Evans’ regular availability — the Pelicans managed a meager 12-15 record.

The front office may consider being a seller at the trade deadline, shipping off Ryan Anderson and his expiring contract in hopes of adding a role player and a draft pick. Last season, he was a critical piece. This year, Anderson is expendable.

To the club’s credit, New Orleans crawled back from a 1-11 start and sits 6.5 games behind the Utah Jazz for the eighth seed in the West. But closing that gap involves jumping the Denver Nuggets, Sacramento Kings and Rockets without Evans and (for a couple more weeks) Gordon.

So much for the preseason darlings.