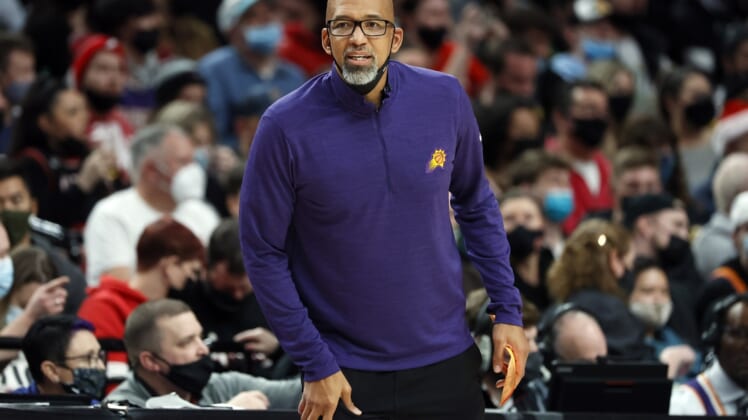 JaVale McGee recorded 17 points and eight rebounds and Deandre Ayton added 15 points and 10 boards to help the well-balanced Phoenix Suns roll to a 118-98 victory over the visiting Washington Wizards on Thursday night.

Chris Paul had 12 points and six assists in just 24 minutes as eight Suns scored in double digits. Phoenix won for the 22nd time in its past 24 games.

Landry Shamet tallied 16 points and Cameron Johnson added 13 for the Suns, who improved to 13-2 at home. Mikal Bridges and Cameron Payne scored 11 points and Jae Crowder had 10.

Bradley Beal finished with 26 points and five assists for Washington, which has dropped four straight games and seven of eight.

Deni Avdija scored 14 points and Montrezl Harrell had 12 points for the Wizards. Aaron Holiday and Raul Neto each tallied 11.

Phoenix shot 53.2 percent from the field, including 9 of 29 from 3-point range, while beating Washington for just the fourth time in the past 13 meetings. The Suns held a 47-32 rebounding edge and made 25 of 26 free throws while the Wizards were 12 of 19.

Washington connected on 48.8 percent of its shots and was 6 of 21 from behind the arc.

Phoenix owned a 62-50 halftime lead and started the third quarter strong by scoring 18 of the first 26 points. Crowder hit two free throws to cap it and give the Suns a 22-point lead with 5:10 left in the period.

Washington scored the next seven points to move within 80-65 on Beal’s dunk with 2:57 left. But Johnson buried a 3-pointer with 20.7 seconds to go as Phoenix took an 89-71 lead into the fourth quarter.

McGee’s dunk pushed the lead to 96-73 with 10:20 remaining in the game. The Suns’ lead topped out at 26 points en route to closing out the victory.

Ayton had 13 points in the first half as Phoenix held the 12-point lead at the break.