Some teams earned “A” grades for their performances, while others should downright be scolded for horrendous play.

These were the biggest winners and losers in Week 12.

Obviously, the Eagles’ defense let Stafford and Co. have their way all day long.

Things went particularly well for Stafford and Calvin Johnson, who connected on eight receptions for 93 yards and three touchdowns after Eagles starting cornerback Nolan Carroll departed the game in the second quarter with a broken ankle.

On the offensive side for Kelly’s gang, Mark Sanchez, while not terrible, passed for 199 yards, two touchdowns and zero interceptions. Though, his lost fumble, six sacks and nine quarterback hits were quite momentum-breaking. Philly also could not gain headway on the ground, ending the miserable outing with just 68 total rushing yards.

Shouldering most of the responsibility for what was a third consecutive loss for the Eagles, Kelly didn’t necessarily want to point any fingers, via Phil Sheridan of ESPN.

If Kelly is hoping things will be easier once Sam Bradford returns next week, the Eagles will be on the road in a challenging contest against the New England Patriots.

Good luck with that one, guys.

It looks like OBJ has indeed mastered his personal goal of ambidexterity. 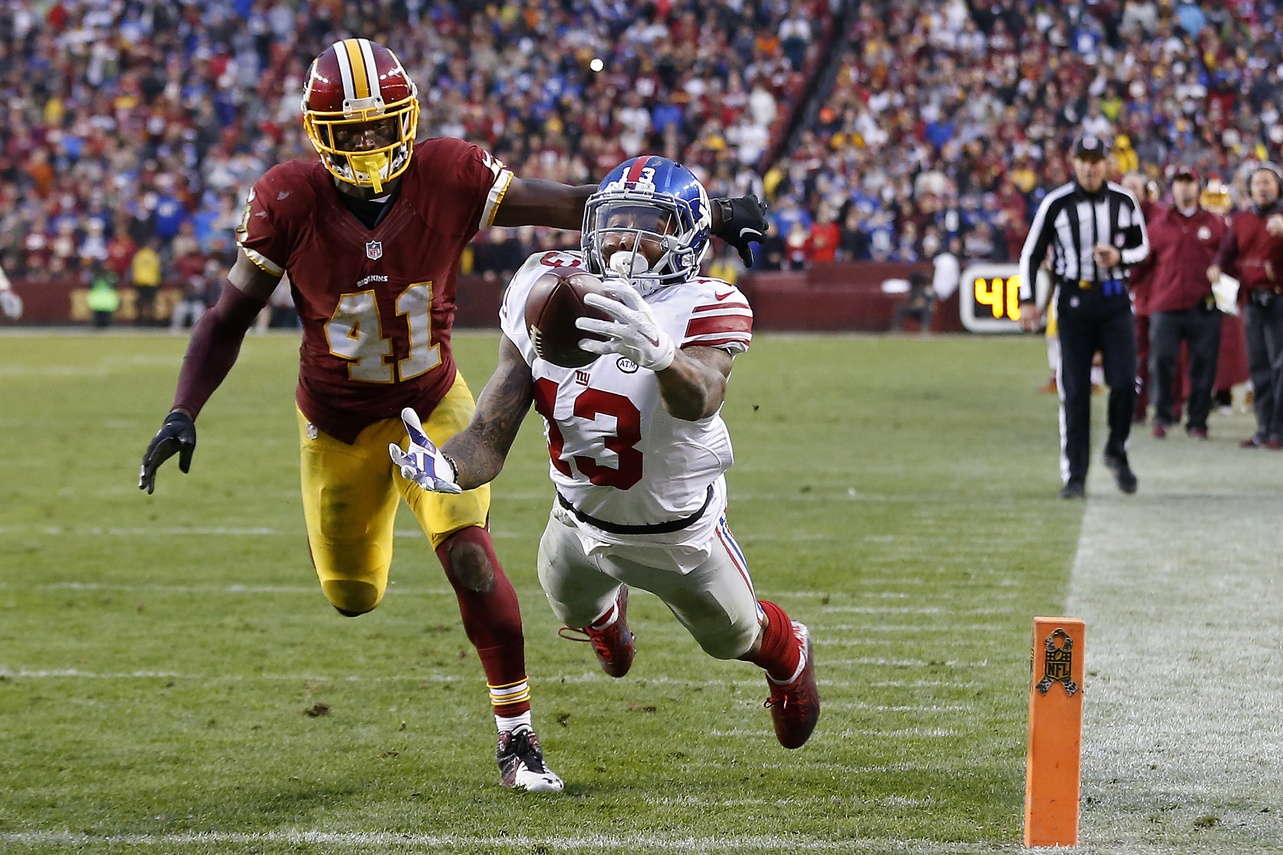 Unfortunately, there weren’t more plays like this earlier in the game for New York. By the time the Giants finally woke up and scored in the fourth quarter, the team’s efforts were too little, too late.

And, while Manning connected with Rueben Randle first, then Beckham for the team’s only two scores, his overall performance was quite awful. Meanwhile, Kirk Cousins and team had one of its “you like that?” performances when the quarterback passed for 302 yards, scored two touchdowns and threw zero interceptions in a 20-14 win at home.

Despite Beckham’s left-handed heroics, the outcome has each team sitting at 5-6, tied at the top of the NFC East.

The Dallas Cowboys may as well throw in the towel because quarterback Tony Romo is done for the season.

After sustaining yet another hairline fracture to his left clavicle, the quarterback has played his last game for 2015. The injury to Romo came in the third quarter when he was sacked by Carolina Panthers linebacker Thomas Davis after what was a miserable performance consisting of only 106 yards, three interceptions and zero touchdowns.

At the time, the Panthers, who were laughably considered the “underdogs” entering into the matchup, were in “dominance” mode. And, even if Romo had not been injured there was little chance that the Cowboys would have turned the game around, being under such a massive deficit (30-6) that late in the game.

Unfortunately, the unfavorable outcome of the game was determined early for the ‘Boys when Romo threw a pick-six on a pass intended for Jason Witten that was intercepted by Kurt Coleman on the first drive of the game.

Everything pretty much spiraled down the toilet after that play. Romo struggled to complete just 52.4 percent of his passes in addition to another pick six by Luke Kuechly, which was coupled by a horrific ground effort that netted just 31 yards.

With Romo’s health and longevity becoming a painfully obvious and serious issue for the team, it is time for the Cowboys to start looking into their long-term plans for eventually replacing their ailing veteran quarterback.

Tony Romo in past five years has suffered three separate fractures of left clavicle and undergone two back surgeries. He will be 36 in 2016

Winner: Ryan Fitzpatrick gets his mojo back after trimming his beard

In an attempt to turn things around for the New York Jets that were entering Week 12 with back-to-back losses, Fitzpatrick decided that trimming his 10-pound beard would “switch up the mojo” for the team.

Wednesday was a sad day, in attempt to 'switch up the mojo' Jets' Ryan Fitzpatrick trimmed his beard.
(via @nyjets) pic.twitter.com/mXL8Y2gWzf

Apparently, Fitzpatrick’s well-groomed look did make an impact, because the Jets had their way against the Miami Dolphins in a home victory, winning by a score of 38-20. Fitzpatrick was nearly flawless, passing for 277 yards and four touchdowns, remaining turnover-free throughout the game. In addition, he tallied 22 rushing yards to add to the team’s total of 137 and a Chris Ivory ground score.

Meanwhile, some of Fitzpatrick’s mojo must have rubbed off on the Jets’ defense as well because New York’s secondary managed to keep the Dolphins shut out well into the third quarter.

In an attempt to keep up, Ryan Tannehill passed for 351 yards and three late-game touchdowns, enduring three sacks along the way. And since the Dolphins fell so dreadfully behind they abandoned the run game early, totaling just 12 rushing yards.

The win for Fitzpatrick and the 6-5 Jets situates the team in second place in the AFC East and into playoff contention. 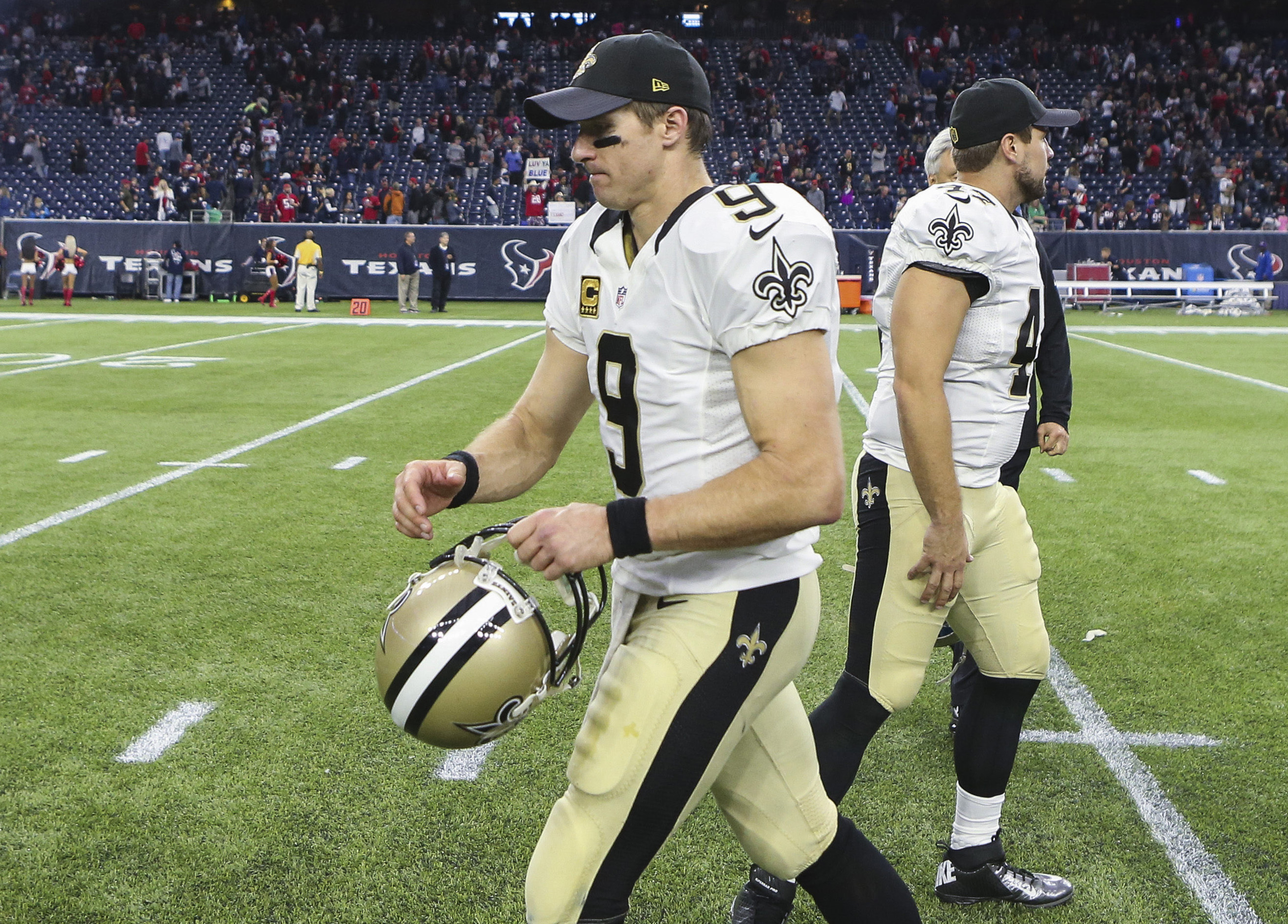 It was a long day for Drew Brees and the Saints, who were completely outplayed by an up-and-coming Houston Texans squad that handily won, 24-6.

With the Saints only able to manage two field goals, this game marked the first game in 155 that the team did not score a touchdown. This was also the team’s first game without former defensive coordinator Rob Ryan, who was fired after Week 10. We can ascertain from the disgusting play of New Orleans’ defense in this contest that the decision hasn’t provided any rewards just yet.

A struggling Brees, who took two sacks by J.J. Watt, completed just 25-of-44 passes for 228 yards and an interception. Adding insult to injury, the ground game consisted of a paltry 50 rushing yards.

Regarding the Texans (now enjoying a three-game winning streak), the Saints’ defense appears to have rolled over and played dead after allowed Brian Hoyer to complete 78 percent of his passes and score two touchdowns. And, to compliment a successful passing game, the Texans totaled 167 rushing yards with Alfred Blue being responsible for 77 of them, along with one rushing score.

After a third consecutive loss and a spot at the bottom of the NFC South, it would appear the Saints are up to their eyeballs with problems that must be addressed.

Winner: Colts’ oldies but goodies deal the Buccaneers the business

Indianapolis Colts 40-year old quarterback Matt Hasselbeck teamed up with 42-year old kicker Adam Vinatieri for a combination of two touchdowns and four field goals, which spurred the team to a hefty 25-12 win against the Tampa Bay Buccaneers.

Hasselbeck, who improved his personal record to 4-0 this year, passed for 315 yards — his first 300-plus yard outing in four years. And might we point out that he vastly out-performed his rookie counterpart Jameis Winston, who passed for 245 yards, one touchdown and one interception.

Capping off Hasselbeck’s squeaky clean performance, he threw two passing touchdowns to T.Y. Hilton, who totaled 95 yards along the way.

As for Vinatieri’s contribution, he went four-for-four on field goals with his longest being a 49-yarder in the first quarter.

With the team winning more games with Hasselbeck under center than Luck, surely the Colts are in no hurry to rush their young’n (on the mend from a lacerated kidney) back to his job.

Loser: Those who didn’t start Russell Wilson in fantasy football

The Seattle Seahawks are typically a run-first team, making quarterback Russell Wilson a dicey start in fantasy football most weeks.

Things were a bit different in Week 12, however, in a thrilling matchup against the Pittsburgh Steelers. Wilson stuck to the pocket for the most part, passing for 345 yards, five touchdowns and no interceptions. His amazing accomplishments rewarded fantasy owners approximately 35 points.

The quarterback’s outstanding performance keyed a huge victory for the Seahawks over the Steelers, 39-30.

Doug Baldwin was the major beneficiary of Wilson’s big game on Sunday, catching six passes for 145 yards and three touchdowns. Jermaine Kearse, who had four catches for 47 yards, scored the other two touchdowns.

The Steelers didn’t give up the win easily. Quarterback Ben Roethlisberger attempted 55 passes for 456 yards, one touchdown and two interceptions. Unfortunately, their mad dash to gain another win wasn’t quite enough in the end to beat a proud Seahawks team playing on their home turf.

And, happy birthday to Wilson, who gifted to himself a career-best performance for his 27th birthday.

Rebounding from a loss in Week 11 to the Green Bay Packers, running back Adrian Peterson vented out his frustrations on a suddenly hapless Atlanta Falcons team that is in danger of tanking the season, sparking a 20-10 win for the Vikings.

“We took it personal, the loss last week,” Peterson said, via ESPN.com.

Taking the bull by the horns and dishing the Falcons a whole lot of heartache, Peterson rushed for 158 yards at the breakneck pace of 5.4 yards per carry, scoring two touchdowns.

The Vikings as a whole took advantage of ailing Falcons that saw quarterback Matt Ryan throw yet another interception into the end zone.

Ryan finished with two interceptions in a poor performance, passing for only 230 yards and one touchdown. Running back Tevin Coleman did rush for 110 yards, but the Falcons were unable to punch any runs into the end zone.

The victory for the Vikings, combined with Sunday’s loss by the Packers, means the team now rests at the top of the NFC North with a record of 8-3.