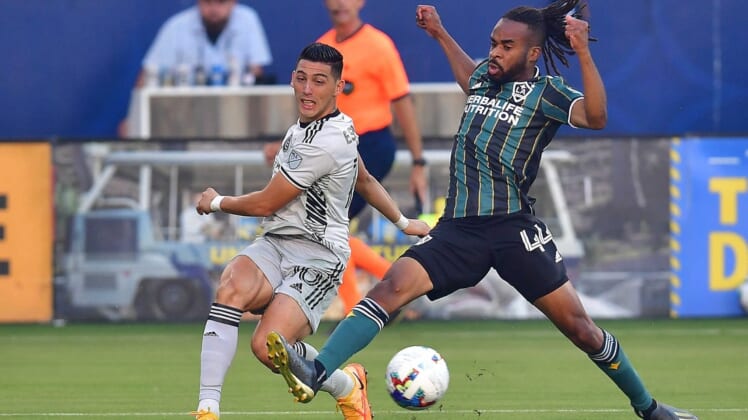 The San Jose Earthquakes scored goals a minute apart early in the first half and earned their first road win of the season, beating the Los Angeles Galaxy 3-2 on Wednesday in Carson, Calif.

San Jose (5-7-7, 22 points) built a 3-0 halftime lead, then held on despite yielding two second-half goals to Dejan Joveljic. The result moved the Earthquakes out of last place in Major League Soccer’s Western Conference.

After MLS All-Star selection Julian Araujo tripped the Earthquakes’ Benjamin Kikanovic from behind in the box for a penalty, Cristian Espinoza buried the penalty kick in the 13th minute for a 1-0 San Jose lead.

If that weren’t enough to shock the Galaxy, some casual passes resulted in a Galaxy turnover that Jamiro Monteiro pounced on. He delivered the ball to teammate Jeremy Ebobisse, resulting in a goal in the 14th minute, Ebobisse’s 11th of the season.

The Galaxy (8-8-3, 27 points) tried to rally, forcing San Jose goalkeeper JT Marcinkowski to make some early saves. But they were hurt by the absences of two key players, Javier “Chicharito” Hernandez and Mark Delgado, who were both sidelined due to health and safety protocol.

The Earthquakes increased the lead to 3-0 when Marcos Lopez scored from a difficult angle in the 40th minute.

The Galaxy regrouped at halftime and pulled a goal back in the 48th minute. Joveljic scored off a pass from Kevin Cabral.

Los Angeles almost made it a one-goal game soon after that. Douglas Costa had his on-target shot saved, then missed over the bar on a free kick in the 60th minute. Moments before that, the Earthquakes had to clear a scoring chance off the goal line to keep the score 3-1.

Joveljic’s left-footer from distance made it 3-2 in the 88th minute as the Galaxy tried to capture a point from a draw. But time ran out, even though Los Angeles pressured the Earthquakes into added time of the second half.

The Galaxy took their third loss in four games while the Earthquakes improved to 2-0-1 in their past three. San Jose is now 1-6-3 on the road.