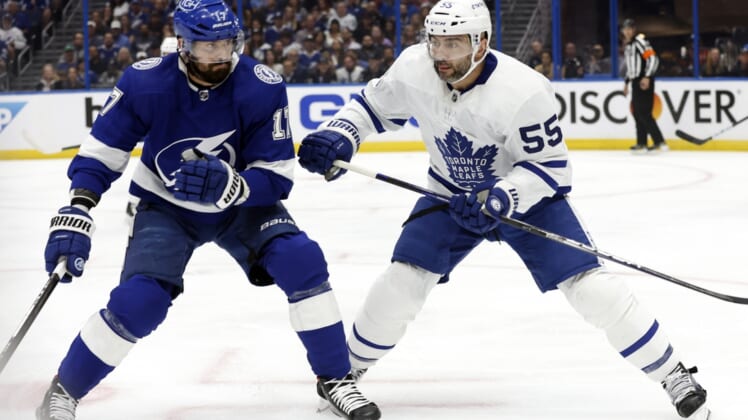 Toronto’s Morgan Rielly, Colin Blackwell and David Kampf scored the first three goals of the game as the Maple Leafs defeated the host Tampa Bay Lightning 5-2 on Friday night to take a 2-1 lead in a first-round Eastern Conference playoff series.

Ondrej Palat had a goal and an assist for the Lightning, and Ross Colton also scored. Tampa Bay’s Andrei Vasilevskiy stopped 31 shots.

Game 4 of the best-of-seven series will be played Sunday in Tampa.

Rielly scored a power-play goal at 4:54, putting in the rebound from a shot blocked by Mikhail Sergachev. Mitchell Marner and Michael Bunting earned assists. Pat Maroon was serving a delay-of-game penalty.

Ilya Lyubushkin joined the rush after leaving the penalty box to help set up Blackwell, who scored from the left circle at 9:14. Engvall also assisted on the goal that resulted from a breakout after Colton had a chance on the Toronto goal.

The Maple Leafs started the second period with two power plays, including 25 seconds with a five-on-three advantage, but managed only one shot in that span.

Kampf put Toronto ahead 3-0 at 5:52 of the second after a turnover in the neutral zone.

Colton scored a power-play goal from the right circle at 11:03 of the second on a pass from Sergachev, cutting the deficit to two. Justin Holl was off for holding.

In one sequence early in the third period, Vasilevskiy stopped Auston Matthews on a breakaway and again on the rebound before Marner hit the goal post.

Palat scored on a high shot from the left circle at 5:43 of the third to pull Tampa Bay within 3-2.

Campbell made a superb save on Steven Stamkos at 13:18 of the third with the Lightning pressing on a power play.

Jason Spezza and Holl were added to Toronto’s lineup, replacing Wayne Simmonds and Timothy Liljegren, who both played the first two games of the series.