Early returns from Browns’ 2017 draft class have been disastrous

We could be jumping the gun. It’s definitely premature. But after the first four weeks of the season, it’s readily apparent that the Cleveland Browns’ 2017 draft class has yet to live up to expectations. Whether this will result in the long-term returns being less-than-stellar remains to be seen. But what we’ve seen thus far is most definitely not good.

Much like everything else we’ve seen Browns-related since they re-entered the league some two decades ago, it starts at the quarterback position.

Rookie DeShone Kizer was benched during Cleveland’s Week 4 blowout loss to the Cincinnati Bengals. This came after he failed to lead the team to points in three-plus quarters of action. Kizer has now turned the ball over nine times, including eight interceptions, in less than four full games under center. That’s bad. That’s historically bad. 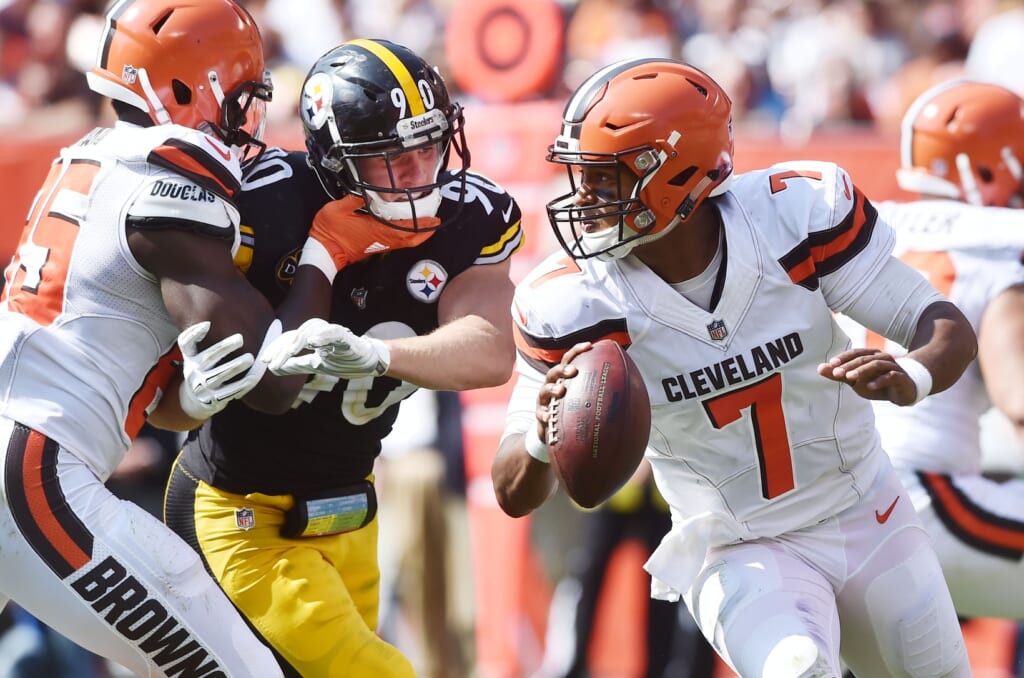 To make matters even more damning for Cleveland’s front office, the team traded the second of its two first-round picks in the 2017 NFL Draft to the Houston Texans. With that pick, Houston selected a quarterback in Deshaun Watson who is coming off a five-touchdown performance in a 57-14 win over Tennessee last week. To put this into perspective, Cleveland has totaled just six points more than that 57-point output in four games this season.

Sure there’s something to be said about building for the long term. The Browns have done a tremendous job adding draft pick assets. That’s magnified by the five picks Cleveland boasts in the first two rounds of the 2018 NFL Draft, including the Texans’ first-rounder it picked up in the aforementioned Watson trade.

Even then, assets mean very little unless you’re able to do anything with them. It’s something Cleveland general manager Sashi Brown touched on recently in a statement that could conclude he’s questioning the decision to pass up on Watson.

“Those decisions are always difficult,” Brown said earlier in the week. “When you trade back, there’s a host of players that won’t be available to you.”

That’s the process. Surely, having more picks will help your rate of adding talent to a talent-stricken roster. But the ratio of busts compared to actual contributors has to be better than what we’ve seen from the Browns recently.

Take the 2016 NFL Draft as an example. Five members of that draft class are regular starters for the Browns. Whether that’s a positive moving forward remains to be seen. Starting in the NFL for a team that’s won one of its past 23 games is one thing. Starting for a good team is a completely different thing. Much like the Browns’ past three drafts, returns in this area are years away.

In addition to Kizer’s struggles, rookie No. 1 overall pick Myles Garrett has yet to take to the field for a regular season game due to a high-ankle sprain. That’s most definitely not a good sign. Andy while Garrett was the consensus top player in the draft, he did have injury concerns coming out of Texas A&M.

The hope here is that this is all behind him. But the Browns have to be a bit concerned behind he scenes. The team is relying on the defensive end to be a dominating force on that side of the ball. A lack of early-season game reps could stunt his growth in this aspect.

Of the Browns’ two other first-round picks from this past April, tight end David Njoku, has caught 9-of-12 passes for 70 yards and two scores in four games. Not a bad start for a young tight end many figured would be a project heading into his rookie season.

Athlete-turned-safety Jabrill Peppers has started all four games this season, racking up 18 tackles and a pass defended in the process. But he’s struggled mightily in pass defense for a Browns secondary that heads into Week 5 yielding a 73.4 completion percentage and 115.2 passer rating through four games.

With four of the first 52 picks in April’s draft, it’s not out of line to say that the Browns have not received the production they should have expected from the 2017 NFL Draft class.

Sure there’s a long way to go. It’s also foolhardy to draw a complete judgement based on one quarter of a season. Heck, we can’t draw a final determination based on an entire season.

Even then, there has to be concern in Cleveland that a talented draft class might not live up to its initial billing. And for a team that’s 1-22 in its past 23 games, that’s most definitely not a good thing.