Five early contenders to steal the crown from Clemson in 2017

College football normally delivers when it matters most, and that was the case once again in the 2017 CFP Championship game.

Dabo Swinney, Deshaun Watson, Hunter Renfrow and the Clemson Tigers dethroned reigning champion Alabama on a last-second touchdown to win, 35-31. With the victory, they cemented themselves in college football history and in Clemson lore forever.

The win also puts a huge target on their backs heading into 2017. The Tigers will be a new-look unit without Watson and a few others. Of course, everybody in the college football world is going to be gunning for their title.

Ric Flair once said that “In order to be the man, you have to beat the man.” These five schools will be taking that saying to heart as we look ahead to the 2017-18 season.

These five schools have the best chance to knock Clemson off the mountaintop. 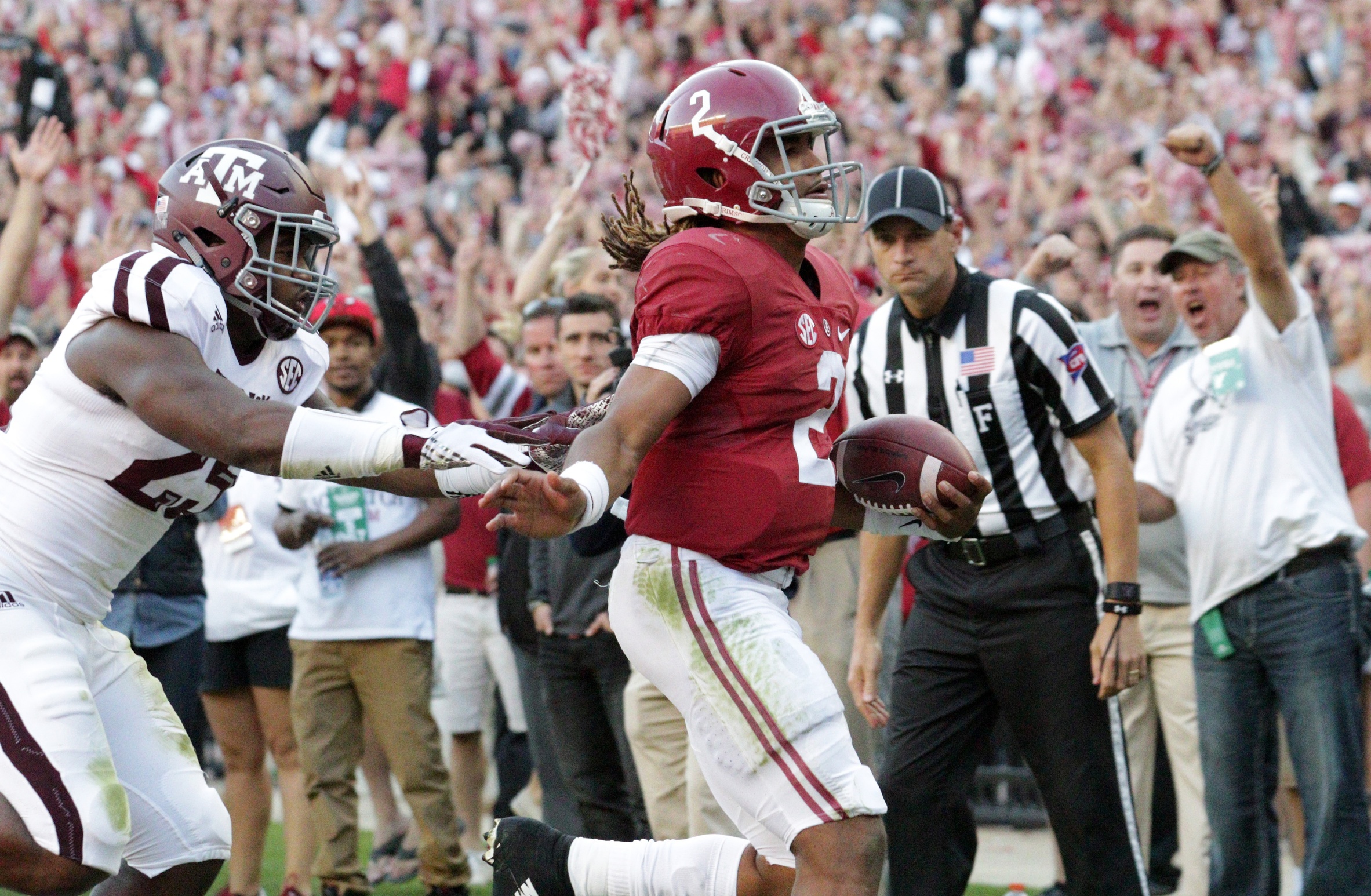 Nick Saban and his Crimson Tide aren’t simply going to fade away into obscurity because they were beat for the championship. In fact, it’s a smart bet that Alabama will be even better next season.

First of all, Saban is a perfectionist. The last-second loss to Clemson will be eating him alive all offseason. It’s going to keep him awake at night and fuel him to build a monster in 2017-18. And keep in mind, it’s not like he’ll be lacking the parts.

Alabama has been the top recruiting program in college football for years now — pulling in multiple No. 1 ranked classes in a row — so you best believe that instead of rebuilding, the Tide will be reloading. With multiple hungry four and five star future NFL prospects consistently on the roster, including players from this championship appearance, Alabama should be a favorite to once again with the SEC and make it to the CFP.

Speaking of current players, perhaps none will be more important than quarterback Jalen Hurts. In his true freshman season, he threw for 2,780 yards and 23 touchdowns (with just nine interceptions), while rushing for 954 yards and 13 touchdowns.

Hurts will be back with an offseason of experience under his belt, and the pain of the championship game loss on his mind. He should be a Heisman Trophy contender. 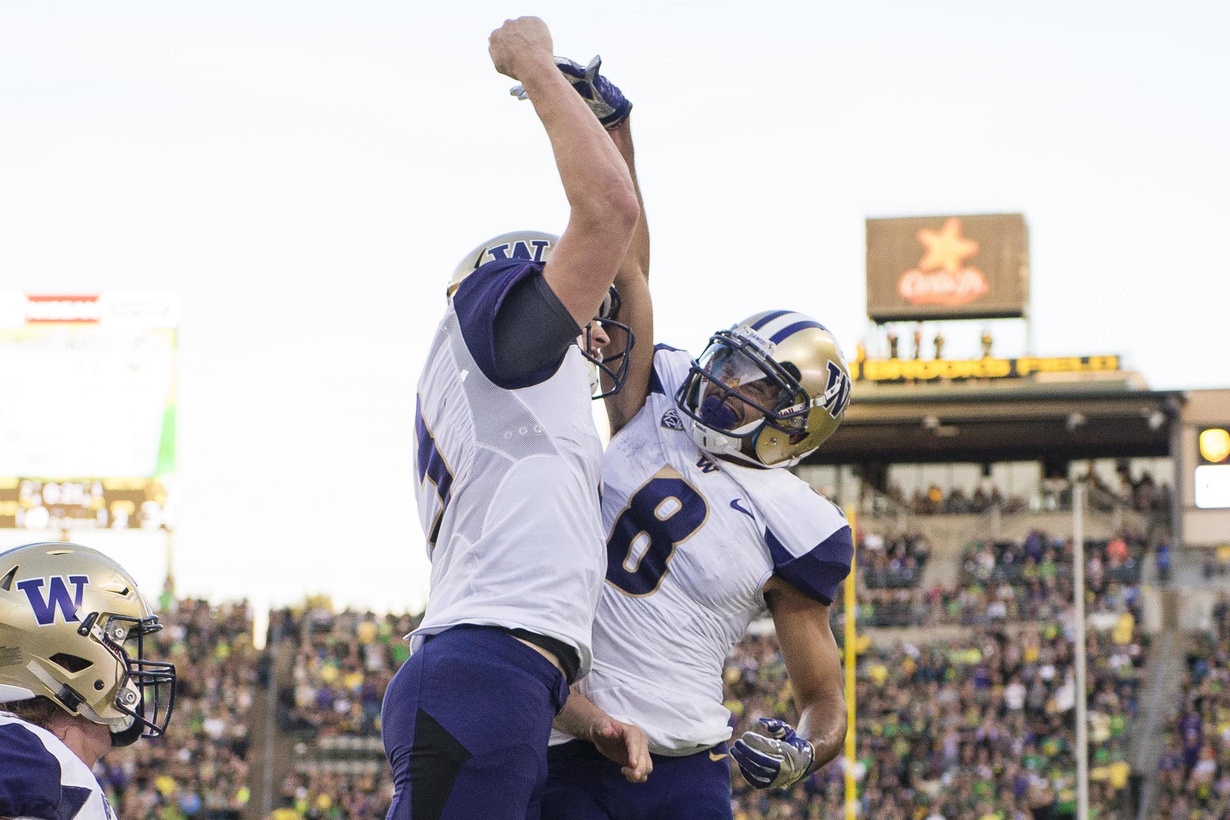 Washington head coach Chris Petersen has a history of success. He went 92-12 in eight seasons at Boise State and put the Broncos on the map. Now heading into his fourth season with the Huskies, he’s put up a 27-14 record, which includes a Pac-12 Championship and a CFP berth.

The Huskies ran into Alabama in the CFP semifinal, losing 24-7. But they are poised to bounce back in a big way in 2016-17 and very well could be title contenders.

One of the top reasons why is quarterback Jake Browning, who just finished his sophomore season — an outing in which he really made a case to be a Heisman contender. Browning led Washington to a 12-2 season, throwing 3,430 yards and 43 touchdowns compared to just nine interceptions. He had two six touchdown performances (at Oregon and at Cal) and he finished with a season completion percentage of 62.1.

Heading into his junior season, he should be on everyone’s early Heisman list, and with one more offseason under his belt, it could be a season to remember for the Folsom, California native.

In the same vein, Washington is also returning superstar running back Myles Gaskin for his junior season. On 237 attempts in 2016-17, he rushed for 1,373 yards and 10 touchdowns. He averaged a stellar 5.8 yards per carry and as long as he’s healthy should be even better next season.

Off the strength of those two players alone, Washington’s offense should be able to contend with anybody in the country.

Throw in the fact that Petersen has consistently recruited at a high level while with the Huskies, and that should make it easier for him to re-tool his defense (losing Budda Baker will be big). If he can do that and the offense lives up to expectations, it wouldn’t be surprising if UW took another trip to the CFP. 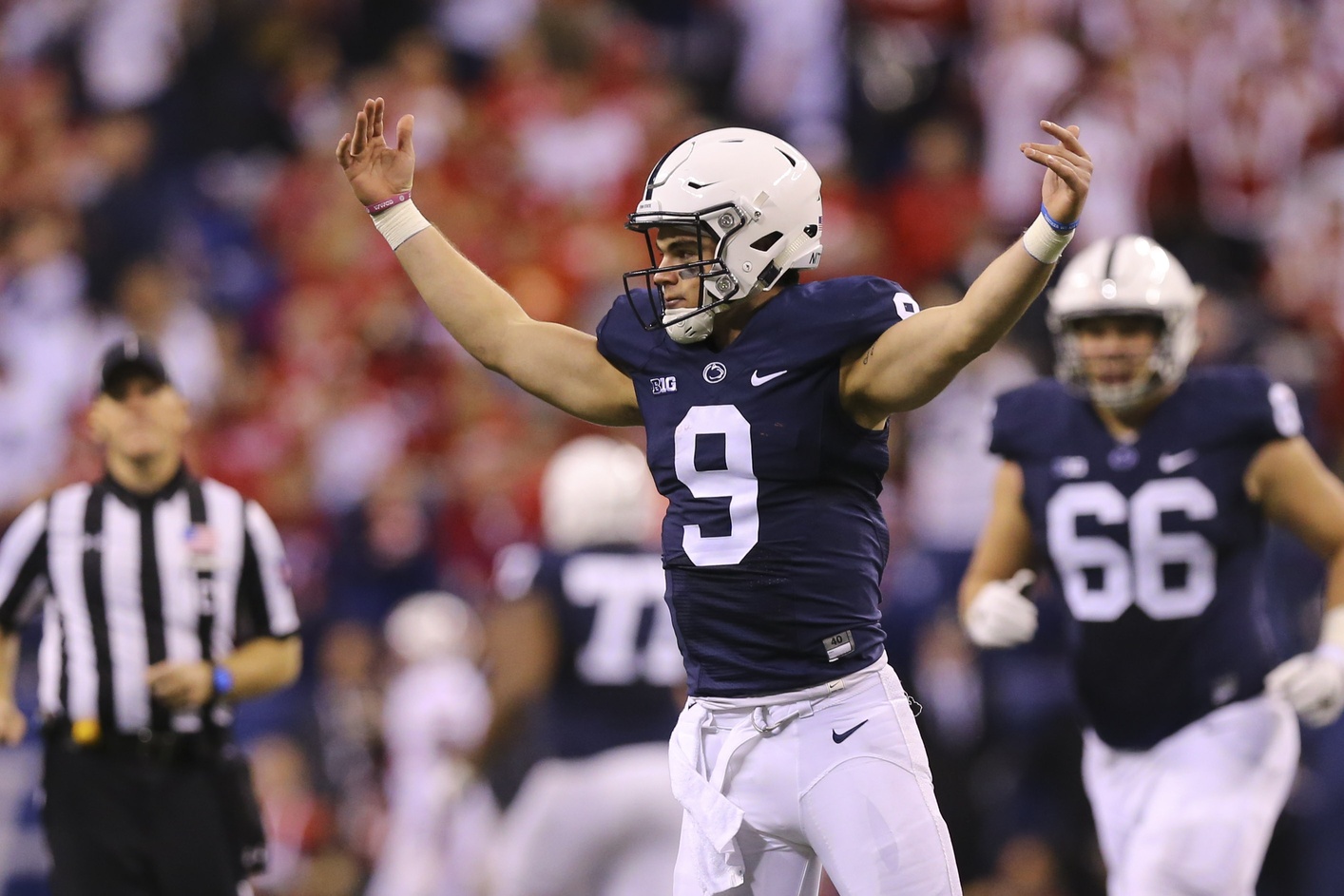 Despite the last-second heart-breaking loss to USC in the Rose Bowl, there are few programs hotter than Penn State right now. Head coach James Franklin is finally living up to his potential and has the Nittany Lions believing that they can play with anybody.

Not only did Penn State knock off No. 2 Ohio State in the midst of its eight-game winning streak to propel it to the Big Ten Championship game, but the Nittany Lions also took care of No. 6 Wisconsin to win the Big Ten Title. And yes, USC pulled off the big win in the Rose Bowl, but keep in mind that there were times in that game when PSU looked dominant.

So if Franklin can get his program to put that game in the past and look ahead to 2016-17 — the sky is the limit.

There are two big reasons to feel good about Penn State. First is quarterback Trace McSorley, who threw for 3,614 yards and 29 touchdowns (eight interceptions) while rushing for 365 yards and seven touchdowns on the ground. McSorley will be a junior next season, and he displayed the leadership and fire needed to lead any team to the big game.

Soon-to-be junior running back Saquon Barkley is Penn State’s other star. Barkley rushed for 1,497 yards and 18 touchdowns in 2016-17 while picking up 402 yards and four touchdowns through the air.

He’s likely the best returning running back in the nation next season, and if both he and McSorely can remain hot, Penn State is going to be very hard to beat.

Franklin is a great recruiter, so the Nittany Lions (now sanction-less) should be able to reload in areas of need. 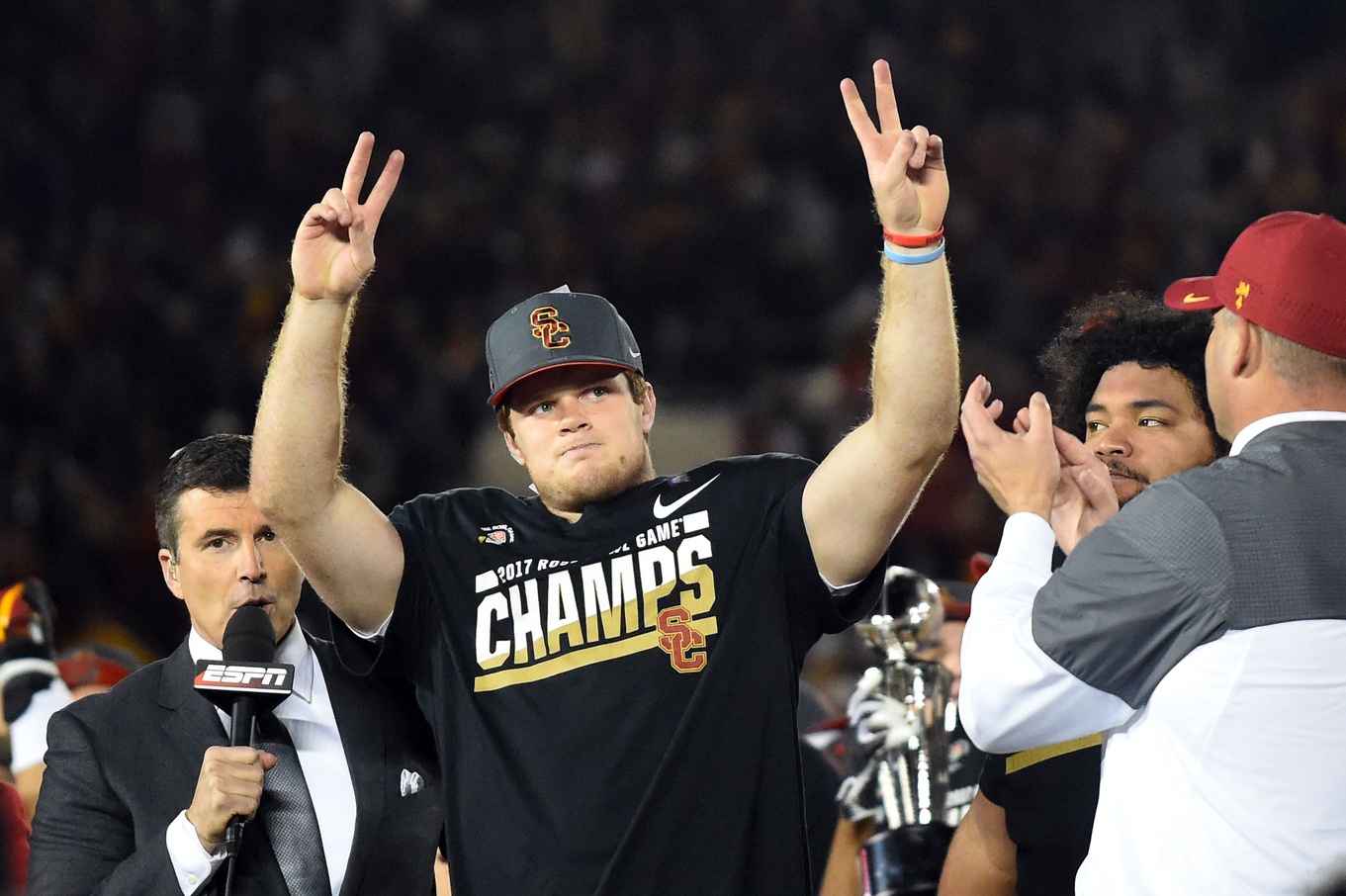 USC was obviously on the other end of the epic Rose Bowl game, and that’s a win that could propel the Trojans on to bigger and better things next season. As you’ve likely noticed, for every contender heading into next season there’s at least one player who will be the X-factor, and USC has that player in a big way in quarterback Sam Darnold.

Darnold was a true freshman this past season, and once he got the reigns of the USC offense he never really looked back. He helped lead USC to a nine-game winning streak to end the season, throwing for 3,086 yards and 31 touchdowns with just nine interceptions. In the Rose Bowl, he threw for 453 yards, five touchdowns and a pick.

Darnold has the potential to be a superstar quarterback in his sophomore season, and USC will have more than enough talent to put around him to be an extermely explosive unit — even with Juju Smith-Schuster off to the NFL.

Keep in mind, USC’s recruiting classes finished No. 10 nationally in 2016 and No. 2 nationally in 2015, so the Trojans should only get better with one more season under the watchful eye of Clay Helton.

If there’s one school that’s set to benefit immensely from Clemson losing Deshaun Watson to the NFL Draft it’s Florida State, which will have to go through Clemson to win the ACC and likely to land a spot in the CFP.

That’s not to say Clemson can’t reload. And the Seminoles have some reloading of their own to do with Dalvin Cook and DeMarcus Walker heading off to the NFL. But Jimbo Fisher is one of the best coaches in college football — both on the field and on the recruiting trail — and FSU should be very strong heading into 2017.

Quarterback Deondre Francois will be back after a freshman season that saw him throw for 3,350 yards and 20 touchdowns (seven interceptions) while rushing for five scores. If he can help FSU squeak out a season-opening win against the Crimson Tide — the Seminoles should be CFP favorites in 2017-18.