Eagles to welcome fans back on Sunday amid COVID-19 protocols

(Reuters) – The Philadelphia Eagles will allow fans back into their stadium starting on Sunday in a limited capacity and with several protocols in place to limit the risk from COVID-19, the team said on Tuesday.

The stadium fits 70,000 but occupancy will be limited to 7,500 which includes players, coaches, team and stadium personnel, media and fans, the Eagles said in a news release.

The plan to have fans present starting with Sunday’s game versus the Baltimore Ravens was made under guidelines from the NFL and public health experts and with the approval of the Commonwealth of Pennsylvania and the City of Philadelphia.

“We have been working very closely with state and local officials, public health experts and the National Football League on a number of scenarios to safely bring Eagles fans back,” said Eagles President Don Smolenski.

“After many thoughtful and active discussions, we are thrilled to announce that the fan experience will return to Lincoln Financial Field this Sunday.”

Tickets will be sold in groups with the ability to purchase as many as six tickets in the same seating pod.

Among the changes to the game-day experience that have been made to create a safe environment are mandatory face coverings, social distancing requirements and personalized seating pods that are appropriately spaced out.

Most of the NFL’s 32 teams started the 2020 season, which is entering its sixth week, in empty stadiums but many are starting to allow fans in a reduced capacity.

The Dallas Cowboys have permitted up to 21,000 fans to attend homes games at their 80,000 capacity stadium. 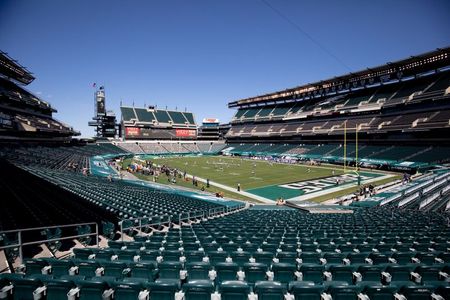