Eagles bust game open in second half to trounce Giants 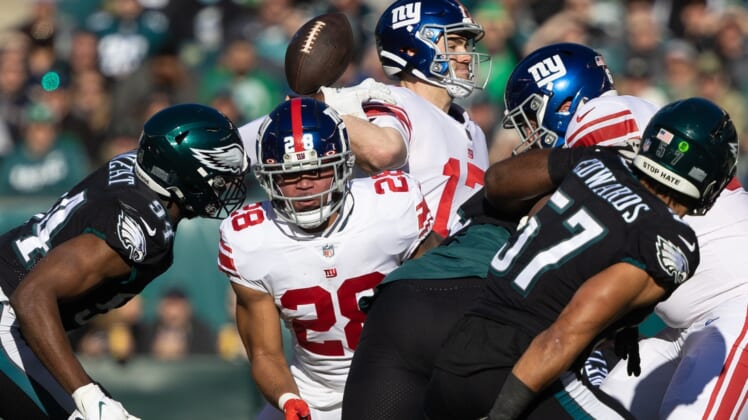 Jalen Hurts threw for two touchdowns, Boston Scott rushed for another and the host Philadelphia Eagles shook off a slow start to defeat the New York Giants 34-10 on Sunday.

Hurts completed 17 of 29 passes for 199 yards as the Eagles (8-7) strengthened their playoff position with their third straight win.

Eagles head coach Nick Sirianni spent much of the week in health and safety protocols, but was cleared Saturday to join the team in person.

Giants quarterback Jake Fromm struggled mightily in his first career start, going 6 of 17 for 25 yards and one interception. Fromm was replaced by Mike Glennon midway through the third quarter.

After a sloppy, scoreless first quarter, the Giants (4-11) went ahead 3-0 when Graham Gano connected on a 54-yard field goal with 11:46 remaining in the second.

The Eagles’ ensuing drive wound up with a 41-yard field goal by Jake Elliott but the attempt landed wide right. Elliott had converted 17 field goals in a row before that miss.

Elliott came back to hit a 22-yarder to tie the game at 3 with two minutes left.

The Giants’ final drive of the first half stalled at midfield after an incomplete pass by Fromm with 34 seconds left.

Rodney McLeod intercepted Fromm on the first possession of the third, and the Eagles took advantage of the short field with a 3-yard touchdown run by Scott for a 10-3 lead with 12:02 left in the quarter.

After an empty Giants possession, Jalen Reagor returned a punt 39 yards to set up at the New York 21. Elliott soon came out and knocked through a 37-yard field goal for a 13-3 lead.

The Eagles took a 20-3 advantage when DeVonta Smith caught a nifty 4-yard touchdown pass with 4:07 to go in the third. The play was called a score, overturned and then changed back to a touchdown after further review.

Alex Singleton then intercepted Glennon and scampered 29 yards for a score and a 34-3 advantage.