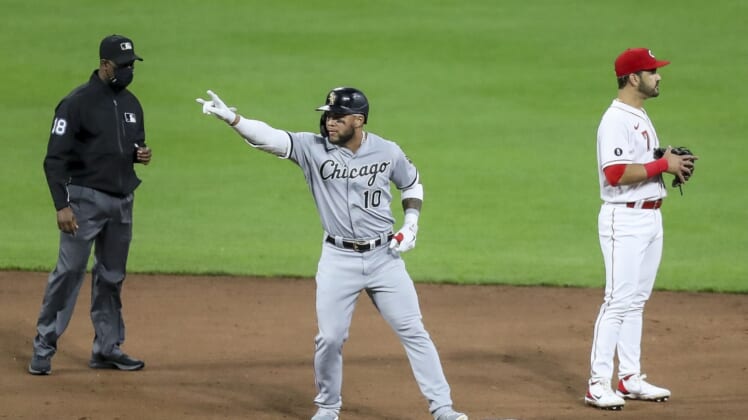 Dylan Cease allowed one hit and tied a career high with 11 strikeouts over six scoreless innings to lead the visiting Chicago White Sox to a 9-0 win over the Cincinnati Reds on Tuesday.

Cease (2-0) also helped his own cause with three hits and a run scored as Chicago won for the eighth time in its last 11 games. Cease had a double and two singles in his first three major league at-bats.

The White Sox scored three runs in the second inning against Jeff Hoffman (2-2), who allowed a leadoff homer to Jose Abreu and Tim Anderson’s two-run single.

Hoffman gave up four runs on five hits over 2 1/3 innings for the Reds, who were held to a pair of singles after hitting five homers in Sunday’s 13-12, 10-inning victory over the Chicago Cubs.

Chicago moved ahead 4-0 in the third when Andrew Vaughn’s sacrifice fly scored Yoan Moncada, who doubled to begin the inning.

The White Sox padded their lead in the fourth when the first two batters reached base against Jose DeLeon, who then allowed RBI singles to Anderson and Moncada. Abreu’s sacrifice fly extended the lead to 7-0 before DeLeon struck out Adam Eaton to end the inning.

The start of the two-game interleague series was delayed for nearly an hour due to rain, but Cease was clearly unaffected by the weather. The 25-year-old did not allow a hit until Tucker Barnhart’s leadoff single in the fifth.

The right-hander has posted a 20-to-3 strikeout-to-walk ratio with four hits allowed over his last two starts covering 13 scoreless innings.

Anderson and Abreu combined for four hits and six RBIs for the White Sox, who were playing their first game since learning that center fielder Luis Robert will miss the next 12 to 16 weeks due to a Grade 3 strain of his right hip flexor.

Barnhart had the only two hits for Cincinnati, which fell to 2-2 on its five-game homestand. The Reds used four relievers, including position player Alex Blandino in the ninth.