Game 4 of the NLDS between the Washington Nationals and Chicago Cubs getting rained out seemed to be a gift from above for Washington. Trailing 2-1 and facing elimination, the Nationals were in position to start Stephen Strasburg in Game 4 and, assuming they won, Gio Gonzalez in Game 5. Instead, Dusty Baker, like his Cubs counterpart, Joe Maddon, is sticking to the original plan.

Baker also explained why that decision was made.

Dusty said Strasburg did throw a bullpen today in anticipation of starting Thursday. So by time game was called, couldn't pitch tomorrow.

Quite frankly, that’s a weak explanation.

If the rain came absolutely out of nowhere, we’d cut Baker some slack here. But that’s not the case. This was an anticipated storm and it was known for hours that a rainout on Tuesday was at least a distinct possibility, if not completely expected.

By not throwing Strasburg (on full rest) with the season on the line on Wednesday, Baker is doing his team a tremendous disservice.

Frankly, the fact that Maddon is starting Arrieta instead of Game 1 starter Kyle Hendricks can be questioned. But there are some differences in the two situations. The most notable difference among them is that the Cubs are not facing elimination in Game 4.

Additionally, Arrieta won the National League Cy Young Award in 2015, and had a good season (and great second half) in 2017. Throw in his past playoff resume and the fact that he has tremendous numbers at Wrigley Field, and we can understand why Arrieta is still going to get the ball in Game 4.

But Roark getting the nod over Strasburg? Good luck defending this one.

Roark is a capable veteran starter. We know that. We’re not trying to knock the guy. Still, the numbers show how bad of a decision this one is. In 2017, Roark finished the year with a 4.67 ERA and 1.34 WHIP. Strasburg, meanwhile, checked in with a 2.52 ERA and 1.02 WHIP. Additionally, he was dominant in Game 1 against the Cubs, albeit in a losing effort. He went seven innings, allowing only two runs on three hits with one walk and 10 strikeouts. 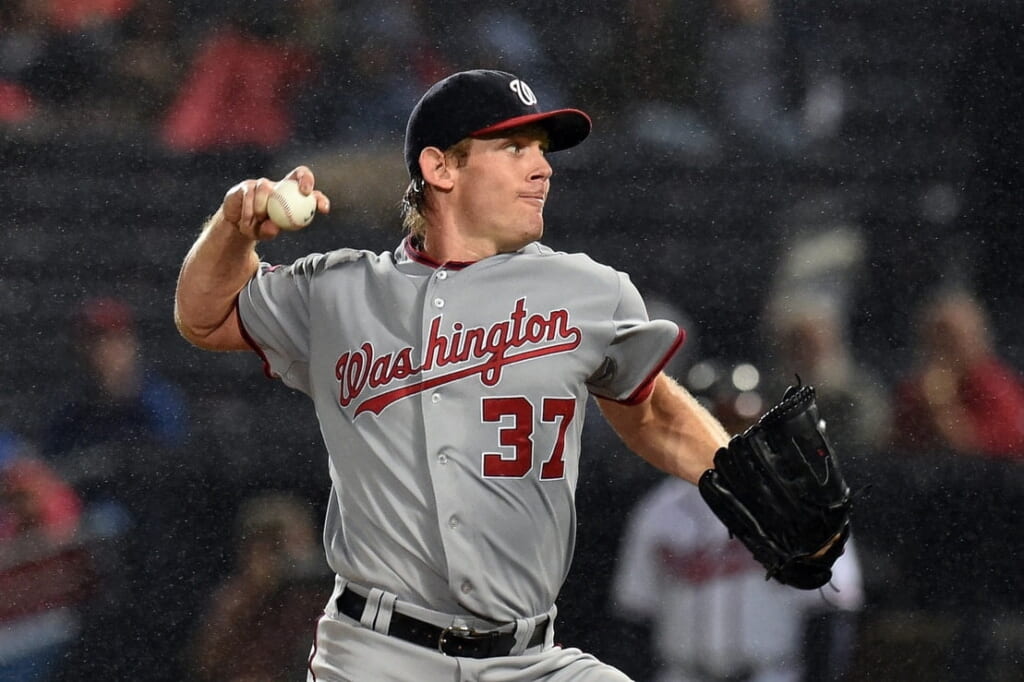 On top of that, Strasburg being used in Game 4 wouldn’t exactly leave the cupboard bare for the Nats in Game 5. Gonzalez, who sported a 2.96 ERA and 1.18 WHIP during the regular season, would not only be available, but would be available on full rest.

Here’s the really crazy thing about this decision.

Hypothetically, let’s say that Roark goes out and throws a gem in Game 4. Heck, let’s say he throws a perfect game. Then, in Game 5 on Thursday, let’s also say that Strasburg backs him up and pitches Washington into the NLCS. It would quiet the critics. But it wouldn’t make this decision the right one.

Baseball is the most unpredictable game-to-game sport there is. It’s a natural product of a sport where a great player is one who fails seven out of 10 times. We know that Roark could go out and beat Arrieta. We also know that even if Strasburg started Game 4, victory would be far from a guarantee. That’s all understood.

Imagine this scenario. A football team trailing by six points ties the game with a touchdown in the final seconds. Rather than kick the extra point, the coach decides to go for two. That’s a bad decision. It doesn’t mean that the two-point try won’t work. It doesn’t mean that the PAT kick would have been good. But the numbers overwhelmingly say that the kick is the best option. That’s what the Roark vs. Strasburg decision is.

Sometimes, the body of work numbers don’t hold up. But the differences are too immense to ignore. Roark isn’t a terrible pitcher. He’s actually a good pitcher, although he did have a below average season. He’s just not Strasburg.

Baseball — especially playoff baseball — is all about giving your team the best chance to succeed. When you’re down and facing elimination, that need is even greater.

By not using a well rested Strasburg in Game 4, Baker is reducing his team’s chances to win and continue its season. Things could still work out in the end. But Baker’s decision is a huge mistake, and it’s coming at the absolute wrong moment.