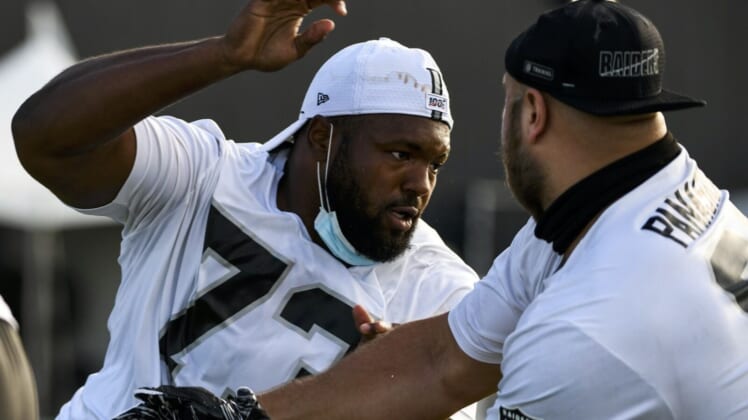 While others are getting the kudos for helping to improve the Las Vegas Raiders defensive front, the potential and skills of Maurice Hurst under first-year defensive line coach Rod Marinelli seems to be overlooked.

Collins signed a one-year, $6 million deal with the team. He has four years of playing experience under defensive line coach Rod Marinelli in Dallas. With both of them in Vegas, the fifth-year veteran should feel comfortable in his transition and make an immediate impact in the trenches.

Despite the buzz around Collins, we shouldn’t forget about Maurice Hurst whose numbers through two seasons stack up close to Collins’ production between 2016 and 2017:

Marinelli has garnered widespread respect around the league. He’s tasked with developing the Raiders’ young talent. Gruden talked about three—now two 2018 draft picks that can take the next step under their new defensive line coach.

“P.J. Hall, [Maurice] Hurst, [Arden] Key, those are three guys that we used high draft picks on,” Gruden said. “Arden has to stay healthy, P.J. Hall, I’m anxious to see where his weight is, he came in overweight last year and at that position that can’t happen. Maurice Hurst has had some good moments, but we need these guys to burst on the scene no question. Getting Rod Marinelli is the best thing I can do to allow that to happen.”

The Raiders cut Hall, who signed with the Houston Texans Thursday, per ESPN’s Field Yates. As Gruden pointed out, Key’s availability is the first step to his progress. He acknowledged Hurst’s bright spots, though clearly, the Raiders think the Michigan product is capable of doing more. Based on what the 6’2″, 291-pound defensive tackle has shown so far, they’re right.

As a rookie on a defensive line that just lost star edge-rusher Khalil Mack, Hurst led the Raiders in sacks (four). For a first-year interior pass-rusher within a depleted front, that’s a solid number.

Hurst had a slow start to his 2019 campaign, but he made his presence felt at Tottenham Hotspur Stadium in London, sacking Chicago Bears quarterback Chase Daniel twice. Do you remember his awareness and soft hands on a big-man interception with a 55-yard return against the Tennessee Titans in Week 14?

Hurst’s most impressive feat isn’t visible in the box score. He finished with the third-highest win rate against two or more blockers, per Neil Hornsby of Pro Football Focus:

In order for Hurst’s win rate to translate into production, he has to close the deal on quarterbacks and do so with more consistency.

With that said, the former Wolverine hasn’t played more than 50 percent of defensive snaps in either of his first two seasons. He’s shared snaps with Hall and Johnathan Hankins on the interior. Because of Collins’ experience with Marinelli, he could play about two-thirds of the snaps as he did in Dallas.

Despite the high expectations for Collins, Hurst should have opportunities to show what he can do under Marinelli. Of course, he has to earn that playing time, but his track record shows a talent who’s still trending upward even in a limited role.

The Raiders will continue to use a rotation on the interior of the defensive line. Hankins has been an understated factor against the run. He’ll maintain his role on early downs. Guenther and Marinelli will probably pick and choose between Collins and Hurst in certain spots. Don’t assume one or the other will dominate most of the snaps though.

Think back to the 2018 draft. If not for Hurst’s heart condition, flagged at the NFL Scouting Combine, he might’ve been a first- or second-round pick. Thus far, the 25-year-old has taken moderate steps to prove that his potential can still translate to a high-upside player at the 3-technique spot while healthy.

For the Raiders, the question shouldn’t boil down to Collins or Hurst, leaving one with very little time on the field in any given week, but the idea they can feed off each other for a solid combination together or alongside Hankins on all three downs.