Dolphins scouting Justin Herbert more than any other team, per report 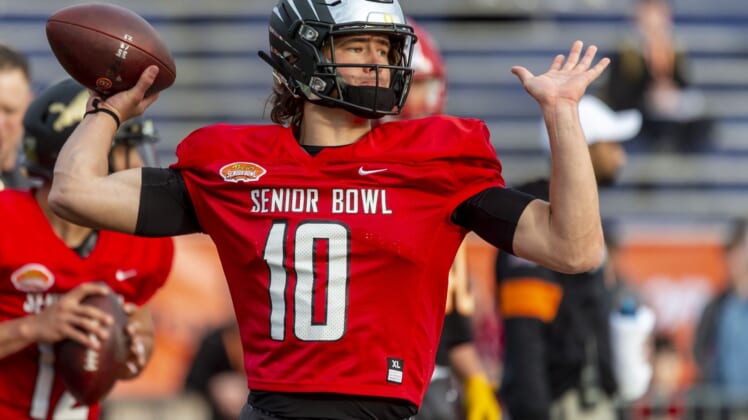 The Miami Dolphins head into the offseason ready to do whatever it takes to land their franchise quarterback. While reports have tied the team to Tua Tagovailoa, it now appears Miami could have its eye on Justin Herbert.

According to Bleacher Report’s Matt Miller, no team has done more work on the former Oregon Ducks star quarterback than the Dolphins.

The senior quarterback is coming off a dominating performance at the Senior Bowl. Herbert spent the week stunning scouts and coaches in attendance with arm strength, accuracy and leadership throughout the week.

In fact, he came away with Senior Bowl MVP honors and drew even more praise for his work in practice and during meetings with teams. Once considered a potential top-10 pick, Herbert might have pushed his draft stock up even further.

It’s very possible that the Dolphins could be high on both Herbert and Tagovailoa coming out of the Senior Bowl. While Tagovailoa is immensely talented, he’s still recovering from a devastating hip injury and it just adds to potential concerns over his long-term durability.

There’s also a growing chance that a team could trade up ahead of Miami for Tagovailoa, or the Detroit Lions could even take him with the No. 3 overall pick.

Miami is clearly exploring all of its options to make sure it finds the right quarterback to lead its franchise into the future. While Tagovailoa seemed destined to join the Dolphins, there now at least appears to be a chance that Herbert could be their choice on draft day.