Does Raiders and Falcons First Round Trade Make Sense? 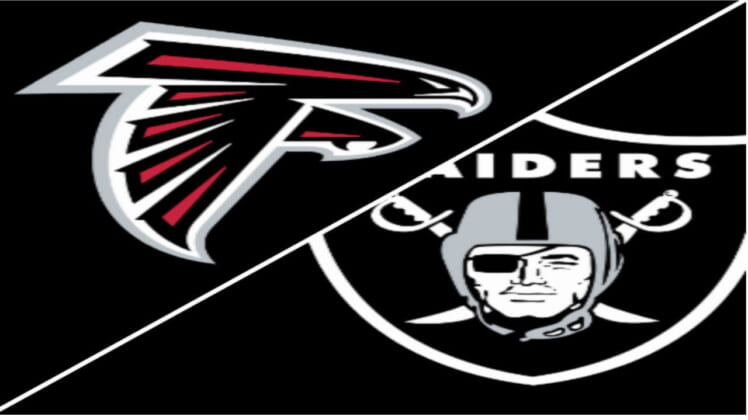 With two first-round picks and an abundance of third-round selection, might the Las Vegas Raiders and Atlanta Falcons make a trade that could change up the first round?

The Las Vegas Raiders have two first-round picks, three third-round selections, a fourth- and fifth-rounder in this year’s draft. On more than one occasion, general manager Mike Mayock talked about picks in the 20-60 range. The Atlanta Falcons have needs as well but perhaps need to make a move into the Top 16 to nab a much-needed defender.

Could this mean a Raiders and Falcons trade makes sense for Las Vegas?

“I do like picks 20 through 60,” Mayock said during Tuesday’s pre-draft presser. “What’s intriguing about our picks this year, obviously I am very thankful to have two first-round picks, but we have three in the third. That to me, three picks in the third is just like stealing.”

How would Mayock feel about four third-round picks?

According to NFL Network’s Ian Rapoport, the Atlanta Falcons may attempt to move up for a player who’s out of their range.

In addition to Rapoport, Dane Brugler of The Athletic attached a name to the Falcons’ potential target list:

Typically, a week before the draft, all sorts of rumors come out of the woodwork, but this one sounds legitimate because of the Falcons’ history and need at cornerback.

Atlanta released Desmond Trufant who signed with the Detroit Lions. The cornerback’s departure leaves a void opposite Isaiah Oliver on the boundary, so Henderson makes sense for the Falcons.

Furthermore, as D. Orlando Ledbetter of The Atlanta Journal-Constitution points out, the Falcons been aggressive during the draft, moving up several times in the first round under general manager Thomas Dimitroff.

So, what would an exchange between the Raiders and Falcons look like? Here’s a breakdown using 2020 Hall of Fame inductee Jimmy Johnson’s point trade chart:

In a potential deal with the Falcons, the Raiders wouldn’t net a pick in Mayock’s draft sweet spot (20-60), but he can bundle multiple selections to move up and keep a third-round pick or two.

Now, let’s look at the biggest pros and cons in a potential deal between the Raiders and Falcons

Con: Raiders Could Miss Out on Top-Notch Wide Receivers

Yes, it’s a deep draft at wide receiver. Do you know what’s better than taking advantage of the depth at the position? It’s the opportunity to choose the best pass-catcher on your draft board.

Despite the history of underachieving first-round wideouts, the Raiders could trust their talent evaluators and go after their WR1, which the offense needs right now. If Mayock moves out of the 12th spot, he’d likely pass on two or all of the following three: CeeDee Lamb, Jerry Jeudy, Henry Ruggs III.

Let’s say the New York Jets take an offensive tackle in the 11th spot. The Raiders might have their pick among all the wideouts. If they trust their eyes and scouts, why not choose the best player available who also fills a major need?

The difference between Lamb, Jeudy, Ruggs and the top wideout available at 16 could cost this offense an elite playmaker ready to contribute at a high level on Day 1.

Of course, Mayock can find a gem in the third round or in a trade up to the second round, but the Raiders would have to choose from what’s available. At 12, they may have the pick of the litter.

As stated above, Mayock’s eyes dilate between pick Nos. 20-60. The Falcons don’t need to give up their 47th overall pick to move up to the 12th spot. Yet, with a deal, the Silver and Black can package a combination of Nos. 78, 80, 81 and 91 for a move into the second round.

If Mayock misses out on Lamb, Jeudy and Ruggs, he could snag Michael Pittman Jr., Tee Higgins or Jalen Reagor in the second round. You can also toss Brandon Aiyuk into the group. This tier of prospects is a notch below the projected top three, but they’re the likely options if the Raiders pass on wideouts on Day 1.

Fortunately, Mayock could double-dip at wide receiver and choose another high-potential prospect in the third round. Chase Claypool, Tyler Johnson and Van Jefferson are probable targets between Nos. 78 and 91.

With Nos. 16 and 19, the Raiders can select a player and trade back to recoup more Day 2 selections, adding another pick or two between the second and third rounds. In that scenario, the Silver and Black would go into Friday with a shopping list of prospects to target and five or six opportunities to take a player off the board.

For those who love the depth within 2020 class, this is a dream scenario. Remember, drafts feature starting-caliber talent beyond the first round. With good talent evaluations, the Raiders would have the chance to fill voids and add depth through Day 2.

As a non-football benefit, on behalf of Mayock and his wife Mandy, each additional pick is another $1,000 for the Clark County Delivering with Dignity Program, which aids families in the Las Vegas Valley that are at high risk of contracting the coronavirus.

Con: What if the Raiders and Falcons Want the Same Player?

Rapoport and Brugler see Henderson as the Falcons’ trade target. We don’t know for sure. Atlanta could also go after defensive tackle Javon Kinlaw who’s also on the team’s radar, per ESPN’s Vaughn McClure.

Depending on whom you ask, the Raiders may not consider Henderson nor Kinlaw with their first selection.

Skeptics have criticized Henderson’s tackling, though, his coverage ability may outweigh the lukewarm physical aspect of his game. Nonetheless, there’s a huge difference between poor technique and an unwillingness to tackle. The former is much easier to correct with practice while the latter speaks to a player’s mindset. Team brass would have to or already went into detail on that concern in an interview.

As for Kinlaw, The Athletic’s Vic Tafur doesn’t think the Raiders target him because he’s a bit raw for an early pick.

“The Raiders won’t be taking Javon Kinlaw,” Tafur wrote. “Just a gut feeling. I had them taking the South Carolina defensive tackle at No. 12 in The Athletic’s first mock draft last week—thinking he was the fifth of five top-tier defensive players—but I think they feel he is too raw, and they have some other concerns to take him that high.”

If team brass has no interest in Henderson or Kinlaw at 12, Mayock may not have a problem giving up the team’s top pick for the 16th slot and an extra third-rounder.

On the flip side, the defense needs a cornerback opposite Trayvon Mullen. Secondly, according to Bleacher Report’s Matt Miller, the team wants another big body on the defensive line.

“…he expectation around the league is a wide receiver early and a middle-of-the-field defender with their second Round 1 pick,” Miller. “That would be a defensive tackle, as the team wants to upgrade there.”

If not Henderson or Kinlaw, the Raiders may try to fill their need at cornerback and find an upgrade for the defensive line on Day 2.

If Jeudy, Lamb and Ruggs are off the board at 16, the Raiders’ potential targets become somewhat of a mystery. Most mocks have paired a wide receiver with the Silver and Black in the 12th slot.

With three spots separating the team’s first-rounders, Mayock doesn’t have to take a wideout first. Perhaps team brass likes a cornerback such as Kristian Fulton or Trevon Diggs at 16.

Although cornerback and wide receiver are the Raiders’ most pressing needs, both positions have starting-caliber talent in the second round. If Mayock uses a first-rounder to trade back or plans to a pair a couple of third-rounders to move up, he can truly go with BPA (best player available) with less concern for need.

Every year, the draft takes some unpredictable turns—players go higher or lower than expected. It’s better to have more options than to pigeonhole yourself into a rigid itinerary.

Verdict: Deal or No Deal?

Quality outweighs depth in football. Don’t pass on a potential All-Pro or Pro Bowler for two or three average players. Big-time contributors win football games. Of course, a balanced roster helps in the long haul, but the Raiders may have a shot at two of three dynamic wideouts in the class.

If Mayock and head coach Jon Gruden have Lamb, Jeudy or Ruggs ranked as their WR1, they should draft that player. Although it’s not a given, team brass can sell the No. 19 pick and still add additional selections in the second or third round.

Going into the 2020 season, this club shouldn’t have major question marks at wide receiver. We need to see how quarterback Derek Carr performs with a strong pass-catching group under Gruden. Does he need an upgraded supporting cast to perform at a high level with consistency, or will the six-year signal-caller leave plays on the field with a dynamic group?

If the Raiders pass up on an instant playmaker and we continue to question the talent around Carr, prepare for another offseason of quarterback banter and what-could-been conversations about the offense.

This is the perfect draft to stock the wide receiver corps, giving Carr a chance to show what he can do with three years of experience in one system and arguably his best group of pass-catchers from running back, to wide receiver and tight end.

So does a trade between the Raiders and Falcons make sense?

Don’t fully hedge here—roll the dice on the top-ranked wideout on the big board and double-dip in the third round.