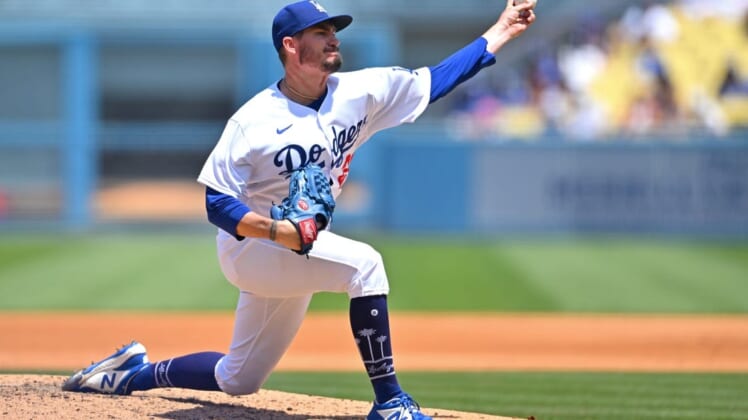 Justin Turner had an RBI single in the first at-bat of his return from a rib cage injury and the Los Angeles Dodgers turned a six-run first inning into a 7-1 victory Wednesday afternoon over the visiting Washington Nationals.

Hanser Alberto had a two-run double in the early uprising as the Dodgers scored all of their first-inning runs with two outs to avoid being swept in the three-game series by the National League-worst Nationals.

Dodgers left-hander Andrew Heaney gave up one hit over four innings in his return from a 5 1/2-week stint in the injured list because of his second bout with shoulder inflammation this season.

Nationals starter Patrick Corbin gave up six runs on seven hits in just two-thirds of an inning in the shortest sting of his 10-year career. Washington fell short of its first series sweep of the season but went 3-3 against the NL-best Dodgers this year.

With Mookie Betts on second base following a first-inning double, the Dodgers had two outs before erupting. Will Smith walked and Turner followed with an RBI single to left in his first at-bat since Thursday. Trayce Thompson added an RBI single before Alberto’s two run-double to right-center.

Austin Barnes’ single made it 5-0 against Corbin, with Gavin Lux appearing to fly out to right-center to end the uprising. But Nationals center fielder Victor Robles and right fielder Juan Soto watched the ball land between them untouched for another run-scoring double.

Washington ended the shutout bid with consecutive doubles from Lane Thomas and Luis Garcia for a run in the seventh. Lux had another RBI for the Dodgers with a single in the eighth.

Heaney walked three with four strikeouts in just his fourth start of the season, while lowering his ERA to 0.47 over 19 1/3 innings in his first season with Los Angeles. Alex Vesia (3-0) pitched a perfect sixth inning to earn the victory.

Nationals star Juan Soto, who has been the subject of trade rumors in advance of Tuesday’s deadline, went 0-for-3 with a walk and was 2-for-11 in the series.