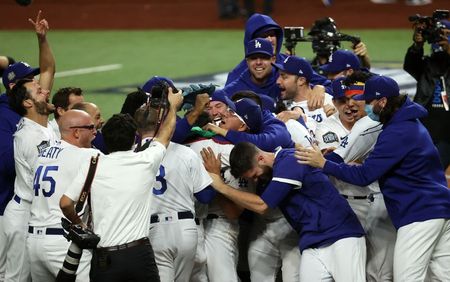 The Los Angeles Dodgers are delaying a public celebration of their long-awaited World Series championship because of the COVID-19 pandemic.

“This season was everything we believed it could be. It was just missing one thing: The best fans in baseball,” the team said in a statement issued Wednesday. “While the wait for a World Championship is finally over, a celebration worthy of our great fans and the City of Los Angeles will unfortunately have to wait until it is safe to do so. We can’t wait to celebrate together!”

The Los Angeles Lakers, who won their first NBA title since 2010 earlier this month, also are waiting for their celebration. And star LeBron James tweeted shortly after the final out of the World Series – a 3-1 win over the Tampa Bay Rays in Game 6 – that he’s ready for a party.

“Man can we PLEASE have a parade!!! I know I know we can’t but DAMN I wanna celebrate with our @Lakers & @Dodgers fans!!! LA is the city of CHAMPIONS,” he wrote.

James was named Finals MVP after the Lakers defeated the Miami Heat in six games in the NBA bubble in Orlando, Fla. The Dodgers last won the World Series in 1988. They won three of the past four National League pennants.

Mayor Eric Garcetti told the Los Angeles Times that will happen when the time is right.

“I definitely intend to have the opportunity for Angelenos to celebrate the Lakers and, on their own day, the Dodgers,” Garcetti said.

The how and the when remain to be determined. Los Angeles County continues to lead the nation in confirmed coronavirus cases with 302,077, according to the Johns Hopkins University Coronavirus Resource Center.

Garcetti said he is open to suggestions for safe celebrations but said the teams ultimately will have the final say.

COVID-19 hit the Dodgers on Tuesday. Third baseman Justin Turner was lifted from the game as the team learned of his positive test. He was criticized postgame for taking part in the on-field celebration after the game in Arlington, Texas, without a face covering.

Back in Los Angeles, police arrested at least eight people on Tuesday night and declared unlawful assemblies in two areas of the city as people took to the streets to celebrate.