Doc Rivers hasn’t given up on Ben Simmons, wants him in camp 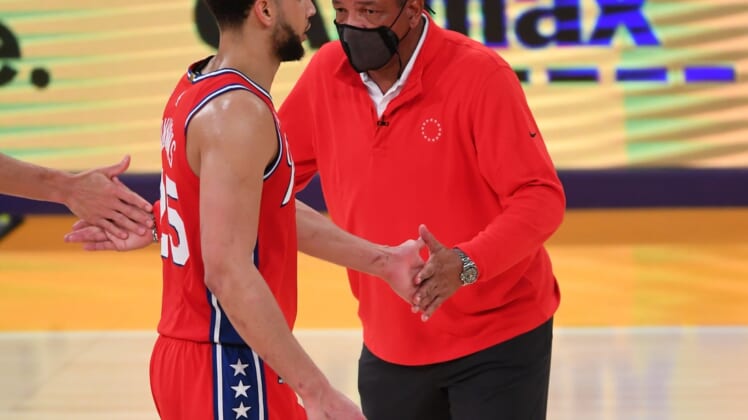 Mar 25, 2021; Los Angeles, California, USA; Philadelphia 76ers guard Ben Simmons (25) is greeted by head coach Doc Rivers during a time out in the second half of the game against the Los Angeles Lakers at Staples Center. Mandatory Credit: Jayne Kamin-Oncea-USA TODAY Sports

Philadelphia coach Doc Rivers said he intends to work on getting Ben Simmons to report to training camp, a day after ESPN reported the star point guard doesn’t intend to wear a 76ers uniform again.

“Well, I hope we can change that thought,” Rivers told ESPN’s “Keyshawn, JWill & Max” on Wednesday morning. “That’s part of our job.”

Tuesday’s report said the three-time All-Star has not spoken to team officials since last month and appears determined to force the Sixers to find a trade partner, per the report. Simmons, 25, could be fined and/or suspended if he skips training camp, which opens on Sept. 28.

His relationship with the franchise soured during the 2021 NBA Playoffs. The 76ers, the No. 1 seed in the Eastern Conference, lost to the Atlanta Hawks in seven games in the second round. 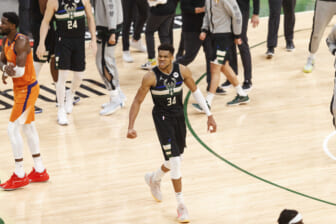 Also Read:
Next NBA broadcasting deal could be worth an outlandish amount

“The greatest thing in sports is, you know it’s fair, you fail at times and then you get back on the horse and try,” Rivers said. “You would be amazed if I told you how many times through a summer when you don’t win, which is 29 teams, how often you have to go through something similar to this. Because losing’s hard. People internalize it, and you have to deal with it. So we’re going to deal with this.”

Rivers said he still sees Simmons as a key component of a team that could win the NBA title.

“Not much, but we’ve had some,” he said of the conversations he had with Simmons over the summer. “And I get his feelings. I understand where he’s at right now, but we’re going to keep trying to work on it to get him in the right place.”

Simmons is a talented playmaker and defender, but his inability — or unwillingness — to take shots proved costly during the series with the Hawks. He also drew criticism for his performance at the foul line. He made just 34.2 percent of his attempts (25 of 73) in 12 playoff games after shooting 61.3 percent during the regular season.