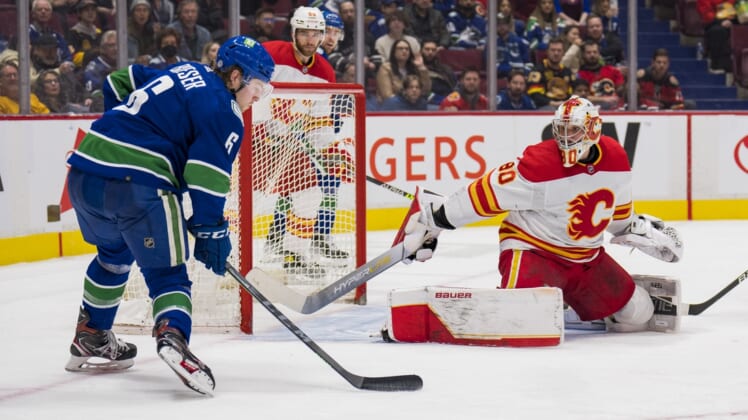 Dillon Dube scored twice as the host Calgary Flames claimed a 6-3 victory over the Vancouver Canucks on Saturday, serving a crushing blow to their playoff hopes.

Elias Lindholm reached the 40-goal mark for the first time in his career for the Canucks.

Quinn Hughes, Conor Garland and Elias Pettersson replied for the Canucks (38-30-11, 87 points), who are six points out of a playoff spot with three games remaining. Goalie Thatcher Demko stopped 26 shots.

Lindholm collected his milestone marker on a power play at 2:44 of the second period when he unloaded a perfect wrist shot from the right circle to open the scoring. He and Matthew Tkachuk give the Flames two 40-goal scorers for the first time since 1993-94.

Dube doubled the lead 16 seconds later when he converted a shot from the slot set up by Calle Jarnkrok, but the Canucks clawed back.

Hughes put the Canucks on the board with 74 seconds remaining in the second period by lifting a blocker-side shot for his seventh goal of the season.

Then Garland’s nifty 18th of the season — he batted a puck out of the air as he was sliding past the net — drew the visitors even at 5:36 of the third period.

However, Ritchie restored Calgary’s lead 14 seconds later with a fortuitous tally, as Tanev’s point shot banked off his skate for his third of the season.

Dube buried a back-hand shot at 13:33 of the frame for his 16th of the season and sixth in six outings, and Zadorov made it a 5-2 game with a seeing-eye point shot for his fourth goal of the season.

Pettersson wired a wrist shot off the bar and in with 2:25 remaining, but Gaudreau made his 39th of the season an empty netter with 99 seconds left on the clock.

Gaudreau has 111 points, the second most in a season in franchise history. Kent Nilsson’s 131 points in 1980-81 is the Flames’ record.