Despite short bench, Spurs land another win over Timberwolves 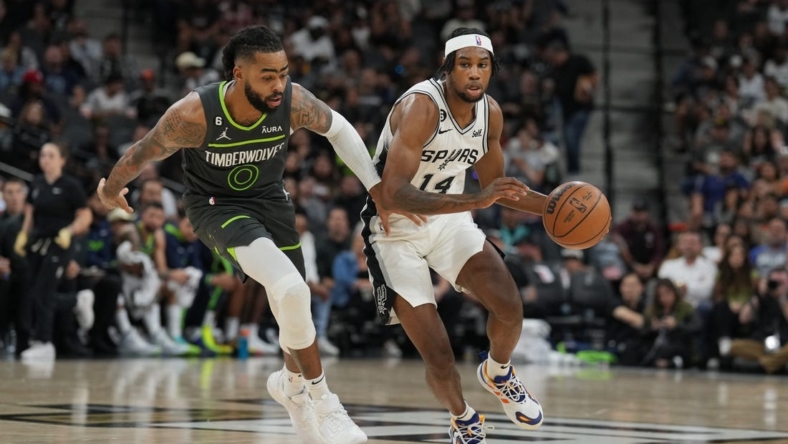 Keldon Johnson scored 25 points and Doug McDermott added 23 points off the bench as the short-handed San Antonio Spurs defeated the visiting Minnesota Timberwolves 107-98 on Sunday in the third game between the two teams in a seven-day stretch.

The Spurs were up by 15 points heading into the fourth quarter before Minnesota pulled to within three early in the period. But San Antonio pushed its advantage to 10 after a McDermott 3-pointer with 5:03 remaining and Johnson iced the game with a triple and two free throws in the final minute.

Karl-Anthony Towns led the Timberwolves with 26 points and 11 rebounds, while Anthony Edwards scored all 18 of his points in the second half. Naz Reid added 11, D’Angelo Russell had 10 and Rudy Gobert took 12 rebounds for Minnesota on the first game of a two-game road trip.

The Spurs improved to 2-1 against the Timberwolves this season after the teams split a pair of games last week at Minnesota.

Minnesota established a six-point lead in the early minutes only to see the Spurs rally to go up by as many as five after a 12-2 run. San Antonio led 26-23 after the first period; Towns scored 15 of the Timberwolves’ points in the quarter.

The Spurs expanded their lead to 50-39 on Johnson’s 3-pointer at the 4:31 mark of the second period. Minnesota cut the lead the five only to see San Antonio answer and take a 57-47 advantage to the break.

Towns poured in 19 points to lead all scorers in the first half. McDermott paced San Antonio with 11 points in the half as all nine players that saw the court for the Spurs scored at three points.

Despite their short bench, the Spurs ran their lead to 19 points several times throughout the third quarter as McDermott knocked down three 3-pointers in the frame. Edwards scored seven points in the period to keep Minnesota within reach. San Antonio led 85-70 heading into the final 12 minutes.