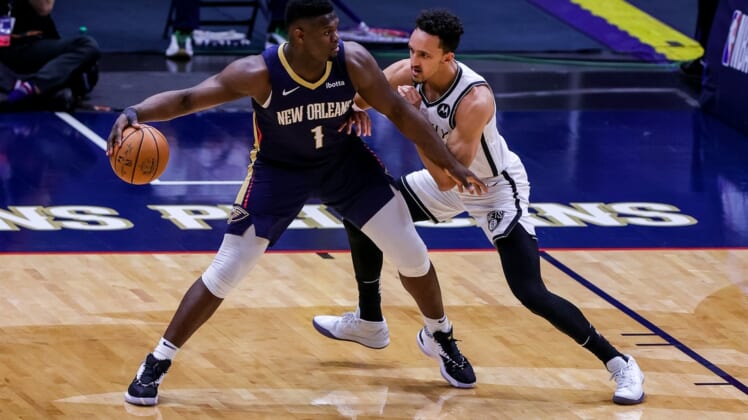 Kyrie Irving scored 32 points and Joe Harris had 24 to lead seven Brooklyn players in double figures as the short-handed Nets held off the host New Orleans Pelicans 134-129 on Tuesday night.

The Nets (39-19) played without James Harden, who is out indefinitely after suffering a setback in his rehabilitation of a hamstring injury; Kevin Durant, who is day-to-day with a thigh contusion; and Nicolas Claxton and Reggie Perry (health and safety protocol).

Zion Williamson scored 33 points, Brandon Ingram had 27, Lonzo Ball and Naji Marshall added 15 each, and Kira Lewis Jr. had 11 to lead the Pelicans (25-33), who lost their fourth straight game.

Marshall’s 3-pointer started the fourth-quarter scoring and gave New Orleans a two-point lead before Brooklyn went on an 11-3 run.

The Pelicans twice got within one point, but the Nets rebuilt the margin to seven both times.

New Orleans got within two points three times, but Brooklyn answered each time and Irving’s jumper gave the Nets a 126-122 lead with 52.4 seconds left.

The Pelicans’ Steven Adams made one of two free throws before Irving’s layup gave Brooklyn a 128-123 lead with 26.2 seconds left.

New Orleans got within three points three times, but each time Brooklyn prevented a 3-point attempt by fouling.

Harris made two 3-pointers, Irving made one and Shamet converted a three-point play as Brooklyn started the third quarter with an 18-6 run and took a 75-65 lead.

The Nets increased the lead to 12 points before Ball scored seven straight New Orleans points to lead a Pelicans surge that got them within 93-92 at the end of the third quarter.