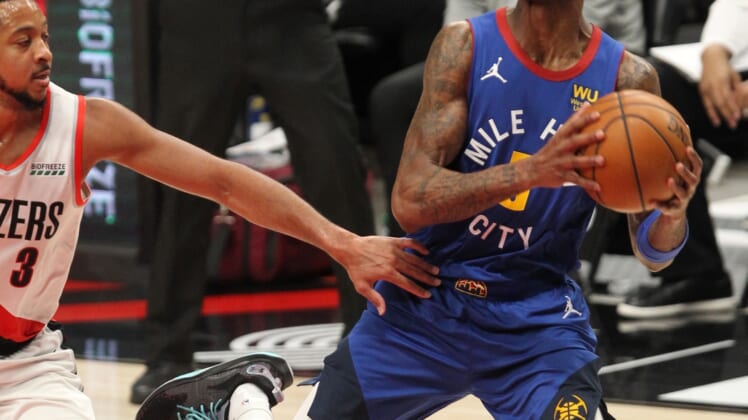 Will Barton scored 14 points and Aaron Gordon and Facundo Campazzo had 12 each for Denver (38-20). Austin Rivers, signed to a 10-day contract on Tuesday, had five points in his Nuggets debut

Damian Lillard scored 22 points in his return from a three-game absence, and Norman Powell had 17 points but missed a shot at the buzzer that would have won it for the Trail Blazers.

The Trail Blazers (32-26) have lost three straight and seven of their last nine.

Jokic made one of two free throws to put the Nuggets up 104-103 with 1:15 remaining. After Lillard misfired on a 3-pointer, Jokic was fouled and hit both free throws with 40 seconds left.

Lillard made a driving layup, and Denver missed on the other end.
Powell was tied up with Gordon for a jump ball with 4.5 seconds left, and the tip went to the Trail Blazers. Covington passed it to Powell, who missed a 9-foot floater at the buzzer.

It was the second straight night Portland missed a game winner at the buzzer.

The Trail Blazers led 89-84 early in the fourth, but Denver came back.

Paul Millsap hit a 3-pointer, Rivers tied it with two free throws, and after a Portland layup, P.J. Dozier put the Nuggets ahead with a corner 3-pointer.