DeMarcus Cousins back with the Los Angeles Lakers? 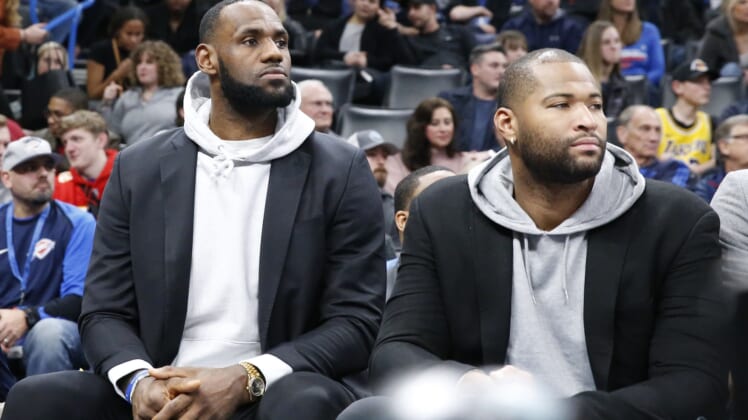 The Los Angeles Lakers are set to join 21 other teams around the NBA in resuming the 2019-20 season at Walt Disney World in Orlando late next month. Boasting the best record in the Western Conference, LeBron James and Co. are considered one of the favorites to come away with the title.

There’s now a chance Los Angeles will have a reinforcement in the form of former All-Star center DeMarcus Cousins. According to ESPN’s Dave McMenamin, Cousins could re-sign with the team.

A four-time All-Star dating back to his time with the Sacramento Kings and New Orleans Pelicans, Cousins suffered a torn Achilles with New Orleans back in 2017-18. He ultimately signed a one-year contract with the Golden State Warriors ahead of last season.

While Cousins’ tenure with the Warriors was ho-hum, it did net him a deal with the Lakers ahead of the 2019-20 campaign. Unfortunately, he suffered a torn ACL before even appearing in a preseason game with the team.

Los Angeles ultimately waived Cousins during the spring after it acquired fellow veteran Markieff Morris. Now that rosters could expand to 17-20 players due to the ongoing COVID-19 pandemic, there’s a good chance Cousins could return. He will have been nearly a calendar year removed from tearing his ACL when the season resumes on July 31.

Even if he’s only able to play 10-15 minutes per game, Cousins would give the Lakers a boost off the bench. At the very least, his presence on the bench would be big for the team. He’s among the most boisterous players in the Association.

Los Angeles will resume its season having posted a 49-14 record. With each team slated to play only eight regular season games before the playoffs, LeBron James and Co. are pretty much locked into the No. 1 seed out west. It is 5.5 games ahead of the Los Angeles Clippers, who currently hold down the second seed.

If the playoffs were to start right now, Los Angeles would take on Ja Morant and the Memphis Grizzlies in the first round.