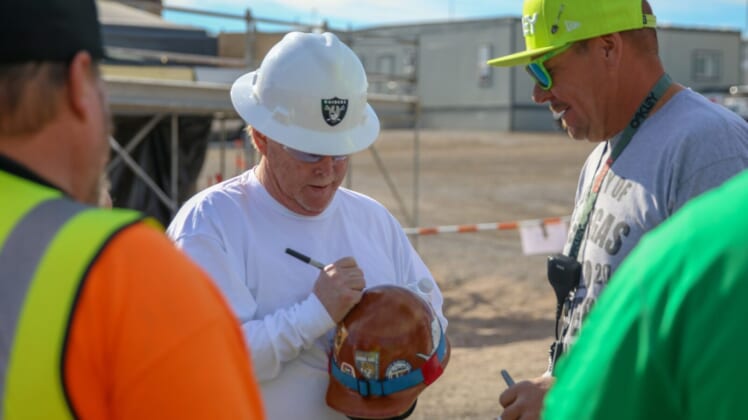 In what has become a more common occurrence, Raiders owner Mark Davis was once again on the stadium construction site in Las Vegas serving lunch to the men and women building his team’s new home just off the Las Vegas Strip.

This time of year we’re all accustomed to the obligatory company holiday party. As a way to celebrate the season with management and coworkers, people all over the nation gather for a meal and celebration. The men and women building the Raiders new stadium in Las Vegas are no different.

When your “office” is the future 65,000-seat home of the NFL’s most storied franchise, it makes for an interesting take on a holiday party.

Raiders owner Mark Davis once again visited the site to serve lunch and show appreciation for the laborers who are working tirelessly to finish the team’s new home by July of 2020. The workers were treated to a special holiday lunch as local dignitaries and those associated with the project joined to share a meal in the cool winter air of Las Vegas. The Raiders Foundation handed out Las Vegas Stadium beanies for the cold winter months ahead and the laborers were treated to a raffle complete with television, tools, meals, autographed Raiders memoribillia, and other giveaways.

“It’s exciting to be out here and thank the men and women working so hard to make this project become a reality,” Raiders owner Mark Davis told Silver and Black Today. “I love coming out here and showing all of these amazing people how much we appreciate their hard work and how they’re making the future home of the Raiders rise from the ground.”

Davis, always the approachable “everyman,” signed autographs, chatted, laughed and wished happy holidays to everyone he could. He stood on the lunch line to shake hands, take pictures, and personally thank as many as he could.

“To come out and celebrate the workers, like we get to do today, and feed them lunch, get to meet with them, means so much to me because they’re so important,” Davis said. “And they thank me for the job and I’m thanking them for the job they’re doing. It’s a win-win situation.”