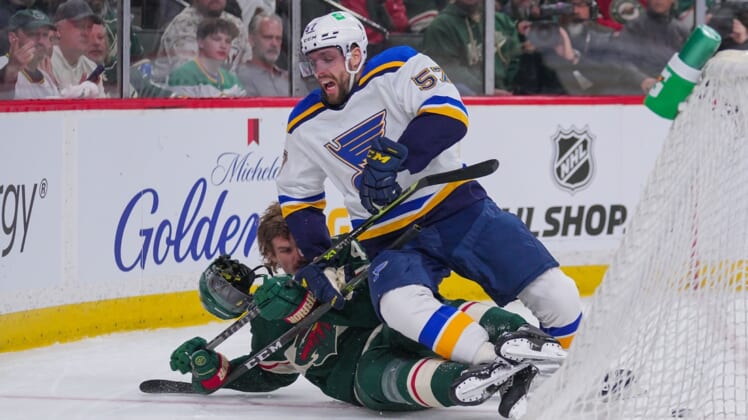 David Perron had three goals and an assist for the visiting St. Louis Blues in a 4-0 win against the Minnesota Wild in Game 1 of their Western Conference first-round series on Monday in Saint Paul, Minn.

Ville Husso made 37 saves to earn a shutout in his first NHL playoff appearance. Ryan O’Reilly had a goal and an assist and Torey Krug had three assists for the Blues, who improved to 10-0-1 in their past 11 games against Minnesota.

Marc-Andre Fleury made 27 saves for the Wild, who edged out St. Louis for second place in the Central Division.

Minnesota, which finished 18th in the NHL in power play percentage (20.5) during the regular season, went 0-for-6 with the man advantage.

Husso made 14 saves in the first period and St. Louis killed three penalties while building a 2-0 lead.

St. Louis scored just before its first power play expired to take a 1-0 lead at 6:15.

Fleury made a right pad save on O’Reilly, but the rebound went to the right circle and Perron shot the puck in the net as he fell to the ice.

Later, Blues defenseman Justin Faulk took a slap shot from just above the right circle and Fleury made a save on O’Reilly’s deflection, but O’Reilly scored the rebound for a 2-0 lead at 15:56.

St. Louis had just one shot on goal during an 11:17 span of the second period, but still managed to extend its lead when Perron scored his second goal from nearly the same spot on another power play to make it 3-0 at 16:30.

Husso had 14 more saves in the second period to keep the Wild scoreless.

O’Reilly drew a double-minor high-sticking penalty on Kevin Fiala at 8:32 of the third to kill their sixth penalty of the night, and Perron completed the hat trick two seconds after the Blues’ power play ended for a 4-0 lead at 12:34.

St. Louis was fifth on the penalty kill (84.1) during the regular season.