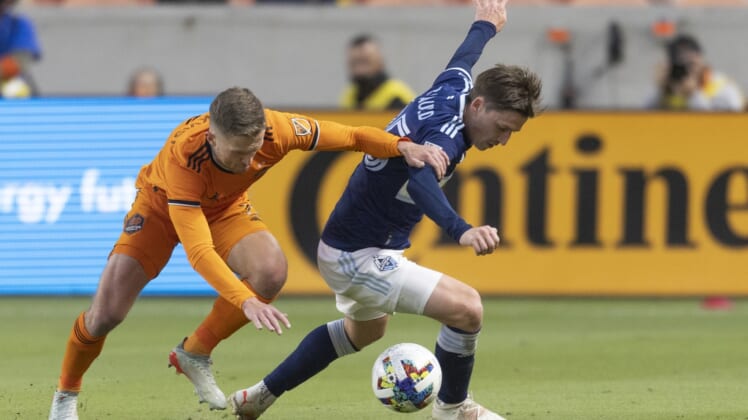 Darwin Quintero scored two goals, including the game-winner early in the second half, as Houston Dynamo FC came from behind to beat the visiting Vancouver Whitecaps FC 2-1 on Saturday in a Western Conference match.

Both teams came into the game winless and without a goal over the season’s first two weeks, making this match a crucial one for early momentum.

Houston (1-1-1, 4 points) was a little better in the scoring zone, making the most of its opportunities thanks to Quintero’s finishing prowess and keen imagination in the midfield from Adalberto Carrasquilla, who started both scoring plays.

Lucas Cavallini got the Whitecaps (0-2-1, 1 point) on the board in the 14th minute, using his left foot to rip a crossing pass from Cristian Dajome into the bottom right corner and past Dynamo keeper Steve Clark from close range.

Cavallini beat Houston center back Daniel Steres to the pass at the near post for Vancouver’s first goal of the season.

The Dynamo evened the score in the 33rd minute as Quintero was wide open and scored after a pass across the goal mouth from Corey Baird.

Both players broke into the clear behind the Vancouver defense while chasing a high entry pass by Carrasquilla, with Baird drawing Whitecaps goalkeeper Thomas Hasal to him at the near post before feeding Quintero.

Houston took the lead in the 50th minute, with Quintero blistering a shot from five yards outside the box and into the upper right corner.

The play again started with a pass from Carrasquilla, who found Carlos Ferreira near the edge of the box. Ferreira passed to Quintero, who was on the run and leashed his scoring shot with authority, leaving Hasal no chance to make a save.

The Dynamo improved their all-time home record against Vancouver to 7-1-2 and have outscored the Whitecaps 17-9 in the series in Houston.