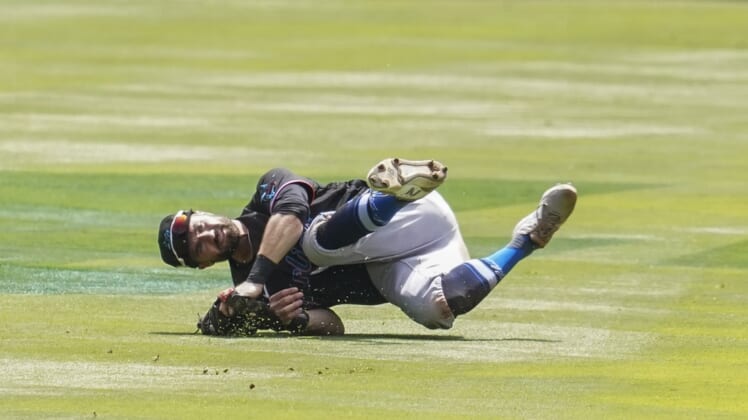 Dansby Swanson lined the first pitch he saw into left field to complete a two-run rally and give the Atlanta Braves a 7-6 walkoff win over the visiting Miami Marlins on Thursday, breaking a four-game losing streak.

The Braves loaded the bases against Dylan Floro (0-1) on back-to-back singles by Ender Inciarte and Ronald Acuna Jr. and a 10-pitch at-bat walk to Freddie Freeman. A walk to Ozzie Albies forced in the tying run and Swanson ended it with his third hit of the game.

The Marlins had taken the lead in the top of the ninth against reliever A.J. Minter. Miguel Rojas walked to lead off the inning and scored on pinch hitter Adam Duvall’s double to right. After the next two Marlins were retired, Garrett Cooper lined a single up the middle just out of the reach of shortstop Swanson.

Minter (1-0) got the win, despite allowing two runs in his lone inning.

The Marlins took an early lead with two runs in the second. Jazz Chisholm Jr. and Jon Berti hit back-to-back doubles with one out. Chad Wallach drove in Berti with a single to left field.

Miami got another run in the fourth inning to take a 3-0 lead. Wallach walked, moved to second on a sacrifice and scored on Corey Dickerson’s single to left.

The Braves got a run in the fifth inning when Acuna delivered a two-run homer, his seventh.

Pablo Sandoval gave the Braves the lead with a three-run pinch-hit homer in the sixth inning off reliever Zach Pop. It was the third pinch-hit home run this month for Sandoval, which set a franchise record.

The Marlins got a solo homer from Starling Marte, his first, in the seventh against reliever Nate Jones.