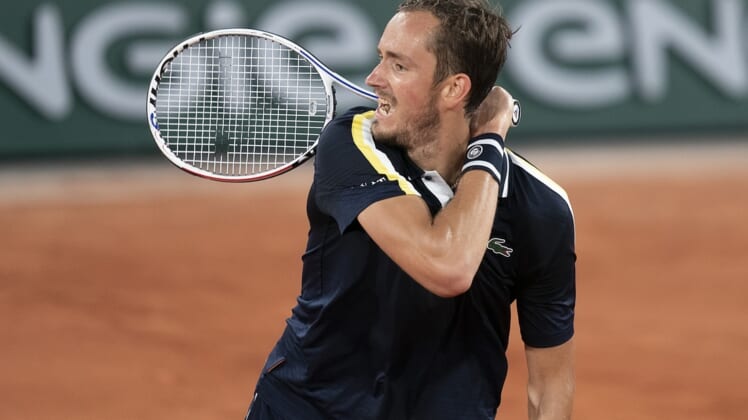 Federer, 39, was appearing in his first major since the 2020 Australian Open. The 20-time Grand Slam winner and the No. 8 seed at Roland Garros had been sidelined for more than a year following two knee surgeries, and said he was pleased to get three matches in but needed to rest the knee.

Medvedev, meantime, had never won a match in four appearances at Roland Garros preceding this year’s event, but he has had little trouble in his first four matches, winning 12 of 13 sets. Sunday, the Russian dispatched the 22nd-seeded Chilean in two hours and four minutes, losing serve only once.

“To beat me the opponent needs to play good,” said Medvedev, the world’s No. 2-ranked player who would rise to the top of the rankings by winning this tournament. “First two sets, he didn’t play good, so it was in my favor. Third set, he started playing better … tight set, tight encounter.

“Straight from the beginning of the match I could almost return every ball in the court.”

Medvedev will next face No. 5 seed Stefanos Tsitsipas, who defeated 12th seed Pablo Carreno Busta earlier Sunday 6-3, 6-2, 7-5. Medvedev has a 6-1 career record against Tsitsipas of Greece.

“I was 0-4 here in Roland Garros,” Mevedev said. “I was losing in Madrid, Rome, I lost Hamburg. I lost Roland Garros last year. I was on a big streak of not so many won matches on clay, so it was true. I said it before the week, that I was feeling really good, I was looking forward to make (a) great result.”

Then he laughed and added, “You should trust me.”

Matteo Berrettini of Italy advanced when Federer withdrew, and will face the winner of Monday’s Novak Djokovic-Lorenzo Musetti match next in the quarterfinals — so he’ll face either an Italian countryman or the No. 1 seed.