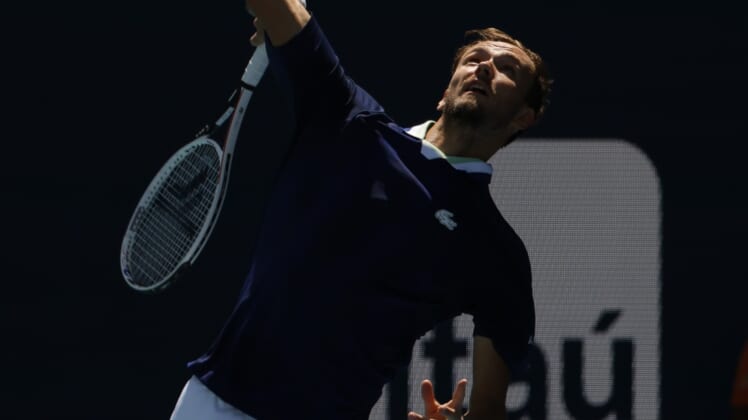 Top seed Daniil Medvedev of Russia had little trouble defeating three-time Grand Slam winner Andy Murray of Great Britain 6-4, 6-2 on Saturday in the second round of the Miami Open.

Medvedev won 27 of 32 first-service points (84.4 percent), served up four aces and, most crucially, never faced a break point against his 34-year-old opponent.

Medvedev, 26, also won 11 of his 18 second-service points en route to defeating Murray in a few ticks under 90 minutes.

“It’s never easy, first-round matches, even if you practice on the same courts for one or two months, it’s never going to be the same as a competitive tournament match,” Medvedev said in his post-match interview. “So I’m happy that I managed to have zero break points against me. I feel like I have some room for improvement, but it was a great match against an amazing player and I’m happy that I managed to go through.”

In the next round, he will face Spaniard Pedro Martinez, who was a 7-6 (2), 6-2 winner over Cristian Garin of Chile. Martinez had four aces and saved four of six break points.

The highest seed to bow out of the tournament Saturday was Canada’s Felix Auger-Aliassime, the No. 7 seed. Serbia’s Miomir Kecmanovic won in straight sets, 6-4, 6-2, saving all five break points he faced.

Greek No. 3 seed Stefanos Tsitsipas survived a three-set match with American qualifier J.J. Wolf, prevailing 6-4, 6-7 (5), 6-1. It was a much closer match than when Tsitsipas blitzed Wolf 6-1, 6-0 at the Mexican Open last month.

“Always expect him to play the match of his life. He had nothing to lose,” Tsitsipas said. “I very much know how to handle situations like this, speaking from experience. It kind of worked in the third set. I think letting go and relaxing a bit helped me a lot and gave me that win.”