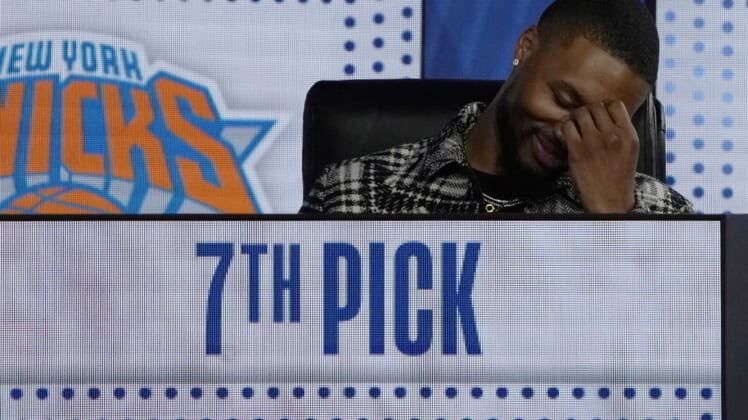 Portland was hoping for a top-four selection in the 2022 NBA Draft. In fact, odds seemed to suggest that this would happen as the Blazers attempt to retool around the future Hall of Famer.

As you wil see by the video below, Dame was not too pleased when it was announced that Portland had acquired the seventh pick in the annual event late next month.

Disappointment. A sarcastic smile. A facepalm. An epic facepalm. Those were the emotions Lillard showed as the Sacramento Kings skipped over Portland for a top-four pick in the coming draft.

It has not been a great past calendar year for Lillard and his Blazers. They lost in the first round of the 2021 NBA Playoffs to the Denver Nuggets last season.

With Lillard injured for a vast majority of the 2021-22 season, Portland finished with the sixth-worst record in the NBA (27-55). The team lost 21 of its final 23 games by a combined margin of 501 points. This is a thing that actually happened.

Lillard’s running partner over the past several seasons, C.J. McCollum, was traded.

Having just promoted Joe Cronin to full-time general manager, the Blazers were hoping to get their offseason started in a big way. That didn’t come to fruition. And in reality, Damian Lillard’s obvious frustration was just a representation of the entire Blazers’ fan base.