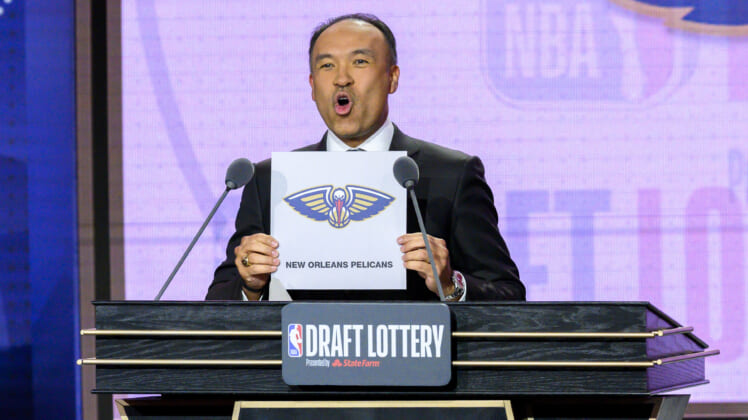 The 2022 NBA Draft lottery was held Tuesday evening ahead of Game 1 of the Eastern Conference Finals between the Miami Heat and Boston Celtics.

The results of said lottery will end up dictating where the next generation of stars land in the 2022 NBA Draft. That list includes a big three of Paolo Banchero, Chet Holmgren and Jabari Smith.

Meanwhile, three teams in that of the Houston Rockets, Orlando Magic and Detroit Pistons boasted the best odds (14%) to earn the No. 1 pick in the draft. If you add in their first-round pick from the Los Angeles Clippers, the Oklahoma City Thunder also had a 14% chance to earn the top pick.

As the ping-pong balls dropped, it became clear that things were going as planned. When all was said and done, the Orlando Magic won the NBA Draft lottery and received the top pick.

The Pelicans’ selection at No. 8 overall came via the trade of Anthony Davis to the Los Angeles Lakers ahead of the 2019-20 season.

Meanwhile, Oklahoma City’s second lottery pick (12th overall) came by virtue of the blockbuster trade that set Paul George to the Los Angeles Clippers back in the summer of 2019.

As for the No. 1 pick and winner of the 2022 NBA Draft lottery, Orlando is now in a great position to add to a core group that includes Jalen Suggs, Franz Wagner and Cole Anthony.

Meanwhile, the Sacramento Kings were able to inch into the top four when they had a mere 23% chance to do so.